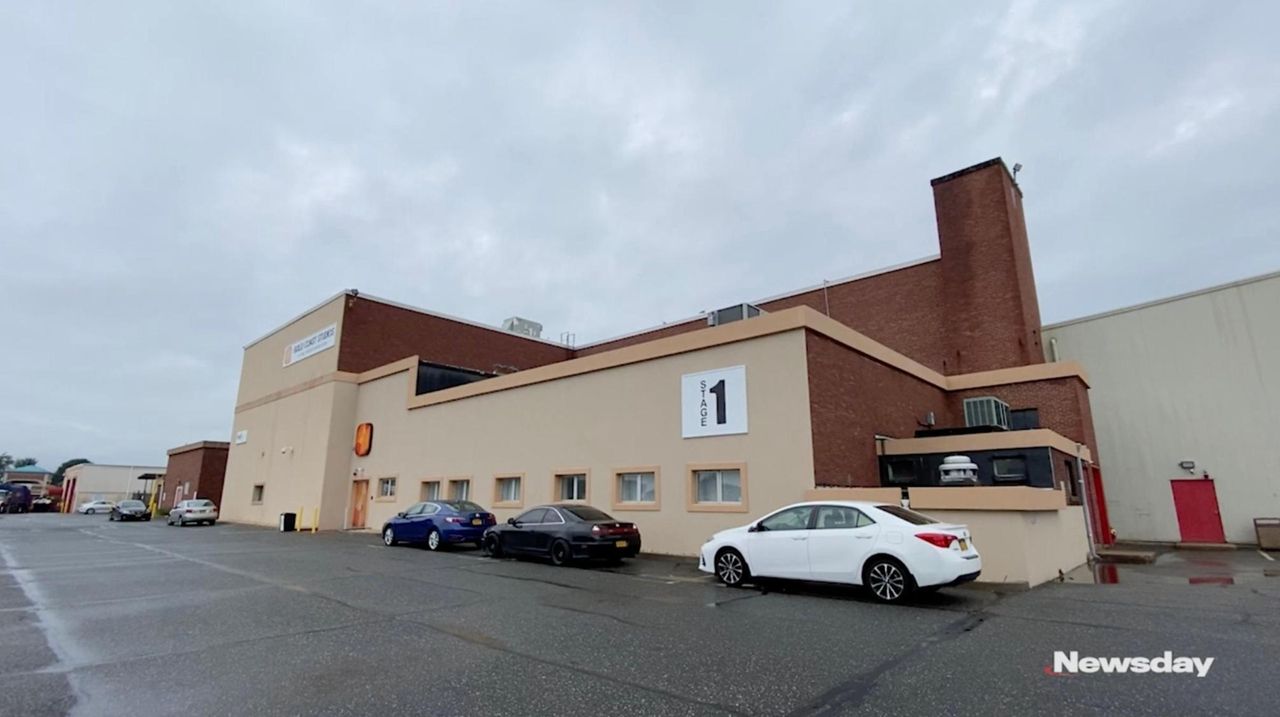 Gold Coast Studios in Bethpage has reopened after shutting down during the coronavirus pandemic. On July 24, the studios provided a tour of the facility and talked about new safety protocols. Credit: Howard Schnapp

Tucked in behind FedEx trucks on Hicksville Road in Bethpage, a former Grumman building offers filmmakers a commodity that has shot up in value in the age of COVID-19: isolation.

“You can come in here. I can give you the key, and you don’t see anybody else,” said Lyndsey Laverty, principal of Gold Coast Studios, as she stood in the cavernous 18,000 square foot Stage 1. “You control who comes in, who goes out and there’s no crossover with any other shows or any other tenants right now.”

The building includes a smaller adjacent soundstage, carpentry shop, offices, and make up room where a production can be self-contained.

“That’s been a big selling point for me because you have complete control of your own environment,” she said.

As the pandemic shut down film and television productions on Long Island and almost everywhere else, the industry and government officials spent months virtually huddled on Zoom to try to figure out how to get back to work safely in a business where working close together is the norm. Film and television production were in the last phase of Gov. Andrew Cuomo’s reopening plan but caution and new protocols have tempered a rush to feed pent up demand for new content. In June, the Industry-Wide Labor-Management Safety Committee Task Force, an ad hoc group of movie studios and unions, submitted a “white paper” to the governors of California and New York that proposed best practices.

“Film production is an important part of New York State’s economy, and will play a critical role as we move New York forward,” Gorton said.

The state’s guidance on reopening film and television production requires that indoor productions take steps to protect cast and crew including wearing face coverings, maintaining social distancing of six feet, limit occupancy inside to 50% capacity, administer weekly COVID-19 tests and make sanitizer available to everyone. The rules allow some exceptions to masks and social distancing such as during performances for makeup and wardrobe changes.

Laverty said she’s received multiple inquiries to lease her two open soundstages in the fall and two productions that were halted at three nearby Gold Coast soundstages are expected to resume in the fall.

One of those productions, Netflix’s “The Crew,” a NASCAR-themed comedy starring Long Island native Kevin James, was being taped before a live studio audience. Under the state’s phase four guidelines, live audiences are now prohibited “unless they consist only of paid employees, cast, and crew.”

Netflix spokesman Jonathan Bing declined to comment on production plans for the show or whether it would continue with a live audience.

Warner Bros.’ “Lisey’s Story,” a miniseries based on a Stephen King story starring Clive Owen and Julianne Moore being produced for Apple TV Plus was also paused. Oyster Bay spokesman Brian Nevin said the town had approved permits for an Owens/Moore production to use a Centre Island beach as a staging area in March.

The production company, Camdrew Productions, is “hopeful to film in Sept/Oct and intend to film in Bayville and use the base camp now more than ever because of the lot size and social distancing regulations that will be in place” Nevin said. In an email.

A Warner Bros. spokesman said in an email that “we are still working towards a return to work on all of our series and don’t have information to share at this time.”

Adjacent to the Museum of American Armor in Old Bethpage, just beyond two tanks and an artillery piece, the partial façade of a Renaissance revival style building sits opposite an incomplete frame. The county-owned field was leased to HBO which began constructing a set of an 18th Century New York City street for the series The Gilded Age, before the pandemic shut it down. HBO spokesman John Kwiatkowski said in an email, “we’re looking forward to resuming production when it is safe and sensible to do so.”

Flo Mitchell-Brown, chair of the industry group New York Production Alliance, said the industry is still figuring out how to work within the new normal.

“New York State reopened for business but in reality, because of the guidelines, the amount of people that will be allowed on set, et ceterra, …  it's not happening as quickly as everyone would like and hope,” Mitchell-Brown said. “But the most important aspect of this is that everyone's safety is in the forefront of everyone's mind.”

Russ Camarda, an actor and independent filmmaker from Lindenhurst said very few films are being made now.

“Some of my colleagues are starting productions, but in small bursts where they can practice the distancing guidelines,” Camarda said.

New safety protocols are a challenge, he said.

“It limits your ability to produce the script you wrote especially if there's any physical contact or any crowds or anything like that,” Camarda said. “You have to kind of work around what you were doing to a new paradigm.”

Suffolk County issued a film permit in July for a production with a cast and crew of fewer than ten. Nassau County Executive Laura Curran said in a statement that the county has received about 30 filming inquiries since production was allowed to resume and has issued three new permits on county properties including a student film, a public service announcement and a web series.

“The film and television industry is an economic force on Long Island generating upwards of $170 million in economic activity annually, so it is crucial that we continue to support this growing industry here in Nassau County and their efforts to safely expand operations,” Curran said in a statement.

One production that started shooting in July is “Manhattan South,” a crime drama pilot that its creators hope will get picked up by Netflix as a series.

Chris Cardona, who runs an acting school in Levittown, wrote the screenplay and is directing the pilot that was being shot over three weeks in Queens and Long Island on a $30,000 budget.

One change in the COVID era is how food gets served for cast and crew. Gone are the craft services buffet tables where anyone could grab a bite.

“Everything has to be wrapped, individually,” Cardona said. “You can't have bagels anymore unless they’re wrapped.”

Everyone wears masks  but "the actors take them off on when shooting their scenes, you can't really keep social distancing," he said.

Thermometers have become part of the standard equipment.

“If anyone had any kind of temperature or any kind of symptoms they couldn't be there,” Cardona said.

'Harder They Fall,' 'Insecure,' H.E.R. nab NAACP award noms
1:00
What if Billy Joel starred in an '80s sitcom?
1:00
Billy Joel starred in a 1980s sitcom? He does in this alternate reality
'The Gilded Age': Fantasy, not a history lesson
High-end LI brokers showcased on 'Selling the Hamptons'
Jon Stewart to receive Mark Twain lifetime award for comedy
Didn’t find what you were looking for?