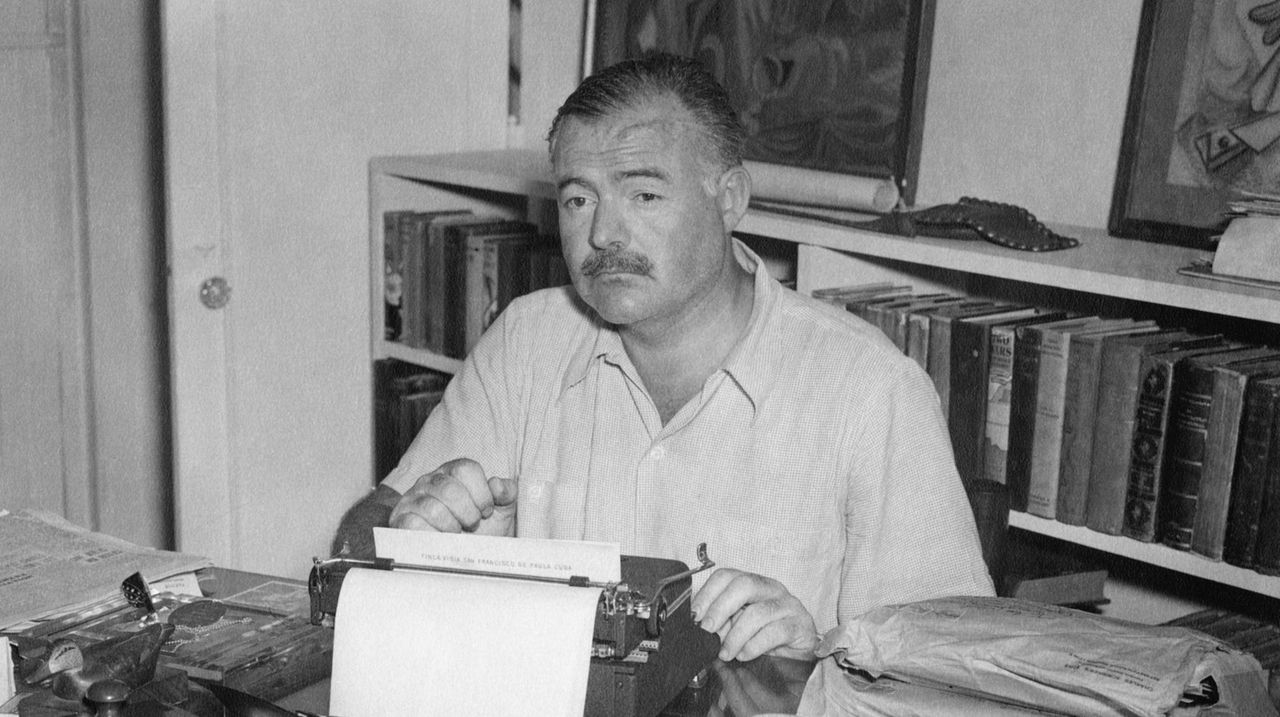 When he died in 1961, Ernest Hemingway was America's most famous writer. Also this: A Nobel Prize winner who had been a brawler, boozer, big-game hunter, survivor of two airplane crashes (back to back), World War I battlefield wounds, and the Battle of the Bulge in World War II (which he covered, improbably, as a journalist/combatant.) His life was cinematic and made-for-Hollywood, that square-jawed, gray-bearded visage too.

Perhaps best not to ask why PBS will devote six hours to him — "Hemingway," Monday-Wednesday, WNET/13 at 8 p.m. — but whether six might even be enough? Monday's opener covers the first major successes, including "A Farewell to Arms"; Tuesday, his participation in the Spanish Civil War; and finally, his retreat to his hilltop home outside Havana. Viewers also get to meet the long-suffering wives: Hadley Richardson; Pauline Pfeiffer, Martha Gellhorn and Mary Welsh Hemingway.

Veteran filmmaker Lynn Novick, who championed the film and codirected with her production collaborator Ken Burns, spoke recently with Newsday:

Why Hemingway, why now?

It's been in the works, in my mind anyway, for about 25 years and I first started thinking about it when I went to Key West and his home there. I went into his room where he had worked, all staged as if he had just been there, and thought, 'Oh my God …' It really hit me that if you're looking for iconic American stories to tell, how could you not do Hemingway?

What was the intended focus?

What it means to be so famous. What is the nature of celebrity and fame and how does that affect someone's art. He had a level of fame and recognition around the world that is unimaginable for a writer today [and we] do wonder how much his fame became so imprisoning for him.

Mental illness is the other theme too.

I didn't understand any of that before we started working on the film [but] when you see the family history of mental illness [and] see the suicidal ideation and depression in his family, it becomes really striking.

He was also a serious alcoholic too who had three serious head injuries?

I think he understood that he had a problem with alcohol [but] at a certain point in his life, couldn't [stop]. You add on the concussions [and] we have so much more information now about chronic traumatic injuries, then you do wonder about how all those things conspired together [in him].

Among the many interviewed — including "For Whom the Bell Tolls" admirer Sen. John McCain, who died in 2018 — is Hemingway's last surviving son, Patrick, now 92. How important was he for this?

That interview was done in 2014 [and] he's a bit frailer now but still mentally sharp. Every project has its own special privilege and getting to know Patrick was certainly one of the highlights of this one. [Of this portrait he said,] 'let the chips fall where they may …'

Edna O'Brien (acclaimed Irish novelist, now 90) takes on a surprising, perhaps unenviable role here — as Hemingway's most ardent defender. There was a lot to defend?

Who declined to be interviewed?

The only one I will say is Toni Morrison, who has written at great length about Hemingway — about the challenges of reading him and the rewards of reading him. But when I got in touch with her it would be only a year before she passed away [in 2019], and she wrote back saying she didn't feel up to it. That was my greatest regret.

His sexism, racism, apparent misogyny have all challenged his position in the canon in recent years. Does he still fit in it?

The canon is such that it should not be static as we as a society evolve our idea of what literature is. There's only so much room on the shelf [and] new writers, new voices have to keep being added, others pulled off. But I do think Hemingway belongs on that shelf [because] there are eternal truths about what he's saying about human nature [and] that still helps us understand the past and think about ourselves today.

Would he survive the cancel culture if he were still alive?

There are some serious problems that are inexcusable, but you do sort of have to look at him and say, 'OK, that's who he was.' Yes, as a woman I do find a lot of his behavior awful.