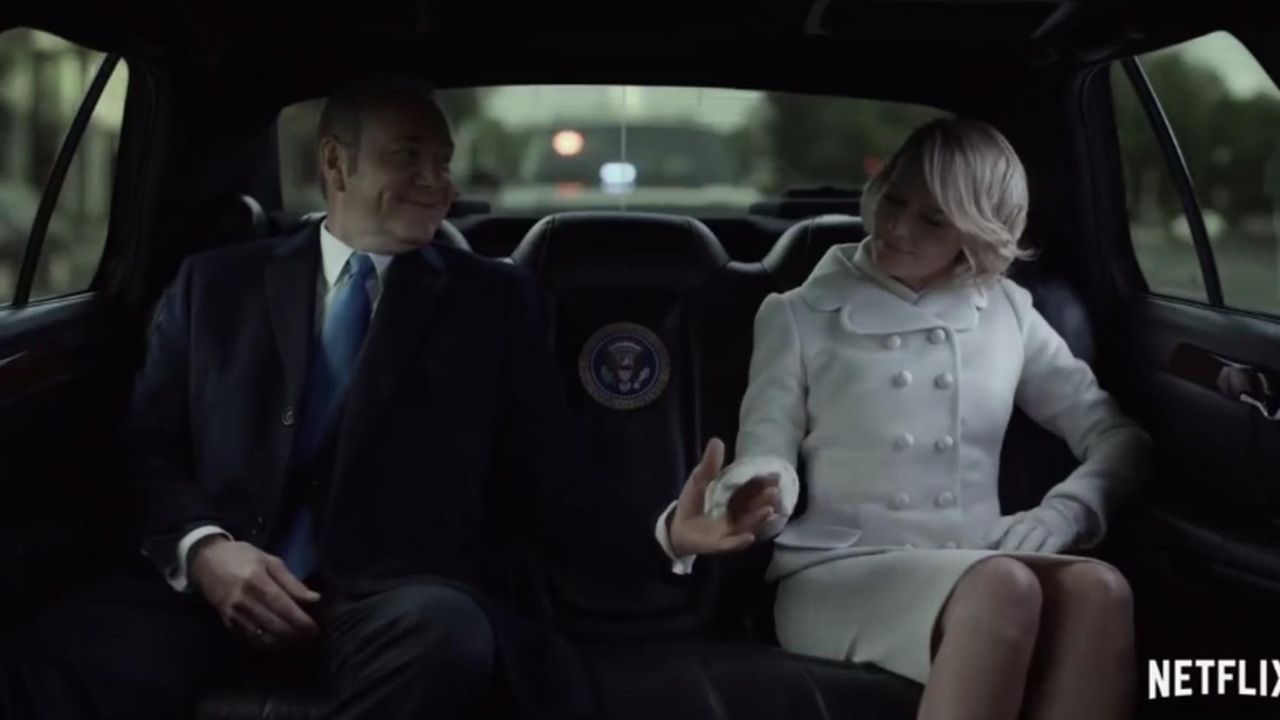 THE SERIES “House of Cards”

WHEN | WHERE Season 5 starts streaming Tuesday on Netflix.

WHAT IT’S ABOUT After Tennessee father Jim Miller was beheaded by domestic terrorists on the internet, President Frank Underwood (Kevin Spacey) demands that Congress declare war on the Islamic terrorist state that backed the execution. He and first lady / running mate Claire Underwood (Robin Wright) have their reasons: First, this puts pressure on his GOP rival, Will Conway (Joel Kinnaman), and second, it diverts attention away from his own scandal, as pieced together in a damning expose by the Washington Herald. It’s only two weeks to Election Day, and the Underwoods are dancing as fast as they can.

MY SAY How eagerly fans embrace the fifth season could depend on how eagerly they embraced the fourth, or at least the fourth season’s wrap. That domestic terrorism plotline must have played well in the writers’ room, but less so under the camera’s impassive gaze. The pleasure of “House of Cards” has always been the illusion of verisimilitude, but the show couldn’t carry off this particular illusion: A couple of high school dropouts from Tennessee who know flawless Arabic, pledge their allegiance to the Islamic Caliphate Organization, and then bring the nation and even the Underwoods to a standstill?

Really? As the world knows — and as events in Paris, Nice, Orlando and now in Manchester bore out — there are more realistic and certainly more horrifying ways to bring nations to a standstill.

But the fourth season didn’t go there, and it may have had its reasons. The enemy-within has been a sturdy “House of Cards” theme. The lies-we-tell-ourselves (and the presidents-who-tell-them) is another. Ever the opportunist, Frank found a perfect way to distract the nation from the Washington Herald scoop and cynically calculated that Miller’s head was a small price to pay for it.

But enough is enough, and “House of Cards” seems to agree. The fifth-season opener efficiently brooms away that creaky storyline, and even pivots on an effective twist that reinforces one more “HoC” theme: Frank will be Frank.

He slides lower and lower down the depravity scale each season, but by the fifth his towering lies and a few ghosts have finally begun to corner him. A cornered Underwood is particularly dangerous. His adversaries still don’t know how dangerous.

Cornered or not, Underwood would never cede the job anyway. He likes it too much. There’s a good scene in the opener where he’s lurking behind a crenelated wall on top of the White House, like Macbeth behind the battlements at Inverness. He points to a crowd down below, then tells Claire they’re wondering “what the president and first lady are doing tonight, and will they be able to protect us? All those people want is someone to keep them from what they’re afraid to know.”

After she leaves, he begins singing “I Wonder What the King Is Doing Tonight” from “Camelot.” Ruthless and evil, Frank at least knows his show tunes.

What about the queen? What is she doing? Depravity doesn’t become her. She leaves that to her husband. Instead, Claire grows in resolve. The ongoing fling with speechwriter Tom Yates (Paul Sparks) is a secret only to the electorate, and even the president has endorsed it. But it’s now dutiful, bloodless and virtually sexless. Her focus is on an election, and on telling voters exactly what they’re afraid to know. “I’ve been meaning to talk to you,” she says in a campaign commercial. “It’s terrifying, isn’t it?”

Terror, finally, is the other dominant theme of the fifth season. But terror of what? Fear of whom? We’ll find out.