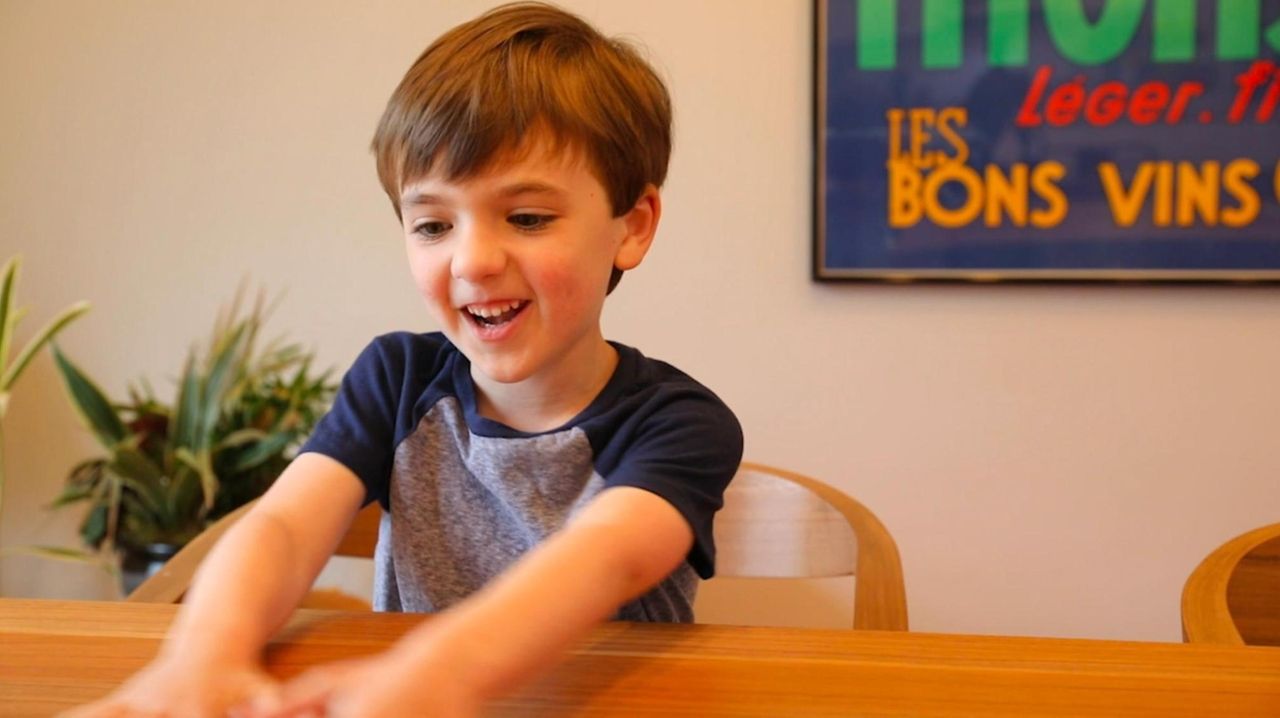 Izzy King of Miller Place is already on his way to stardom. He plays Kate Winslet's grandson in the HBO  limited series "Mare of Easttown." Newsday spoke to him about his role on the show. Credit: Morgan Campbell

Izzy King really wants to see the HBO miniseries "Mare of Easttown," which premieres Sunday at 10 p.m. After all, he spent months working on the show and really bonded with its star Kate Winslet.

But since the Miller Place actor is only 5, chances are he may have to wait a few years before he can finally watch the gritty series about a Pennsylvania detective (Winslet) dealing with a teen girl's murder and her own dysfunctional family.

At least he got to see his own scenes during a virtual premiere party his parents, Adam King and Nicole Galante, held for him with family and friends on April 13.

In the show, Izzy plays Winslet's grandson, whom she wants to protect at all costs. The affection she displayed for Izzy on camera came easy: he charmed the entire cast and crew from the moment he auditioned. Any day he showed up on the set, he was greeted with cheers of "It's an Izzy day!" the young star said.

At his audition, Izzy's genuineness is what helped him win the role, his parents said. "He was really natural and conversational, but at the same time, when they asked him to do something, he could do it," his mom said. "We think Izzy’s awesome and we're psyched when other people think he is, too."

Among those other people was Jean Smart, who plays Winslet's formidable mom. As a Christmas gift, Smart gave Izzy a set of toy cars that have become one of his prized possessions. He also treasured getting to play with the pet turtle that his character has on the show, and has asked his parents for a turtle as a gift for his sixth birthday.

During his off hours, Izzy enjoyed getting to see Philadelphia, where the series was shot before the pandemic forced production to shut down and for another four days once filming resumed. Between scenes, he could often be found playing with some of the "like 4,000" toy dinosaurs Izzy said he has, sometimes to his co-stars' surprise.

On one occasion, Winslet and Smart were rehearsing an intense argument unaware that Izzy was nearby. "Kate suddenly turned the corner and looked at him, and in her British accent said 'Izzy, you’re still here, I didn’t know,' " Adam King said.

Prior to "Mare of Easttown," Izzy's most prominent role was as a member of "a panel of experts" in a pair of Pull-ups commercials shot in 2019. Last month, he also filmed a commercial for another national product. And while making "Mare of Easttown" was a great experience, Izzy has a career path other than acting in mind.

"I want to be a paleontologist," he said.

When asked if he'd like to make a movie about being a paleontologist, he quickly replied, "Yeah!"