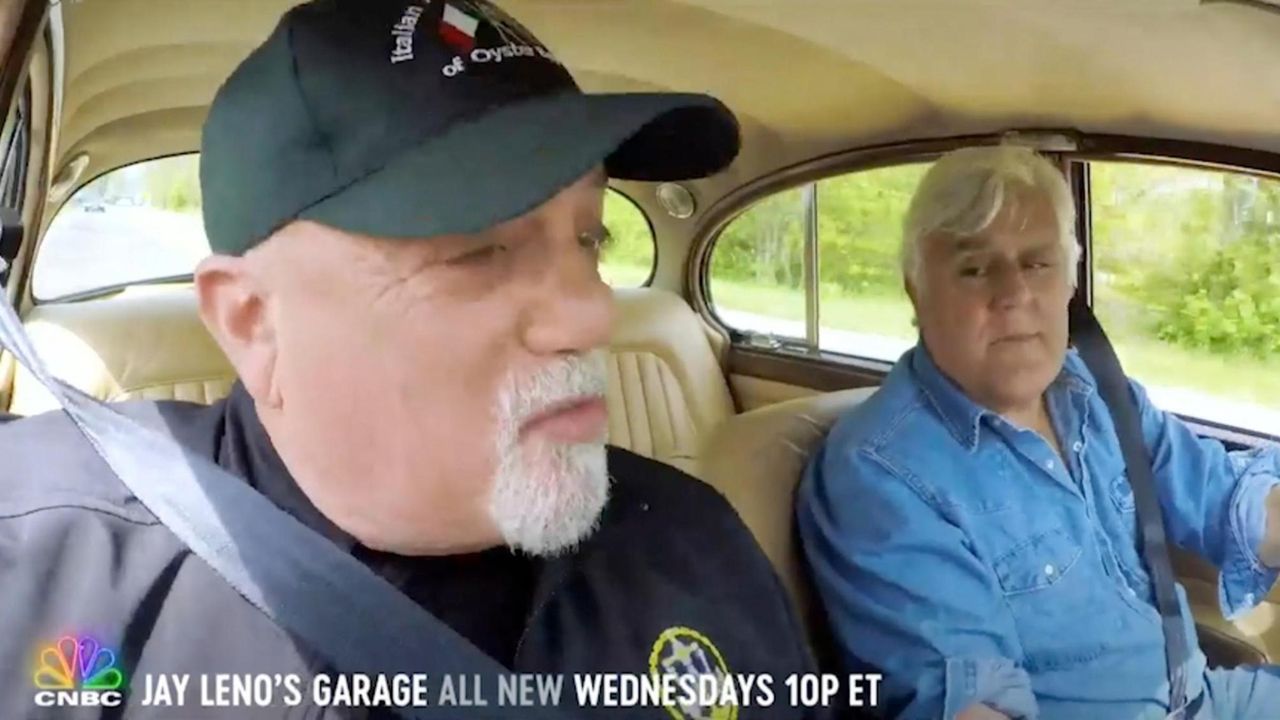 On the Sept. 4 edition of CNBC's "Jay Leno's Garage," Leno and Billy Joel take a ride together. Credit: CNBC

WHEN|WHERE Wednesday at 10 p.m. on CNBC

WHAT IT'S ABOUT In this second episode of the new season of  “Jay Leno’s Garage,” Leno asks what makes a car a cult classic?  As a side question, he wonders the same thing about motorcycles. Naturally, that leads him to Billy Joel's 20th Century Cycles in Oyster Bay. In other segments, Leno peruses such timeless questions as: Which car was faster? The AMC Pacer or AMC Gremlin? Plus, an amusing encounter with Charlie Sheen — sober a year-and-a-half, he says — who supplies a particularly good anecdote about "Platoon."

MY SAY "Jay Leno's Garage" is essentially a ruse by Leno to hang out with old pals and anything on four (or more)  wheels that spits out exhaust. In other words, this is the perfect gig for the former "Tonight Show" host. It's funny, usually effortlessly so, because he's doing nothing here that he doesn't want to do. That giant 12-wheeled Landmaster all-terrain vehicle that starred in 1977's "Damnation Alley" and looks like an articulated sausage with a bad attitude? Jay couldn't be happier to make its acquaintance in Wednesday's episode.

He couldn't be happier to hang out with "my old friend" Billy Joel either, and the sentiment appears mutual. Like Leno, Joel can disassemble an engine blind-folded then put it back together again. Gearheads have a way of bonding in ways that non-gearheads can never possibly understand or appreciate. These two have known each other for decades and easily bond here during the few minutes on-screen, and bond some more over that long-ago decade that was so formative for both of them: the 1970s. (Leno is 69, almost a year to the day younger than Joel.)

As they wander among the beautiful relics of 20th Century Cycles, Joel insists that "there's nothing all that old in here."

Kids in candy stores, especially adult kids, have a habit of admiring the candy. Leno walks by a Norton 850 Commando, a Ducati 900, a line of  Moto Guzzis. An old Whizzer is hanging from the rafters. " I prefer newer technology," says Joel, but "like the older style."

Leno wonders about the first car Joel bought — an Audi Fox — which leads to the next quip: "Seems like you started out as an old man and got younger, automotively."

Joel reveals that was never really much of a car guy anyway, until recently. "Motorcycles I liked since I was a kid. Motorcycles and rock and roll were the same thing — loud, noisy."  (He didn't have a motorcycle license until he was in his 30s, he says.)

The conversation turns from bikes to Long Island. Leno marvels at Joel's long-standing ties to a place he never really left, or wanted to. Joel explains that "I went to see Springsteen's show" —doesn't say which  one or when — "where he sings 'Born  to Run...'"  But not the Motorcycle Man, no sir. He wasn't born to run, he says: "I live fifteen minutes from where I grew up." Leno marvels at that, too.

They head out to Bayville in a hunter green Jaguar Mark 2, a stylish saloon car built in the early '60s and which as Leno explains was used as the getaway car in robberies.

"My mom took us out here as kids," says Joel, after they make a stop at the Bayville Bridge.  "We'd jump off and 'borrow' boats."

They visit Joel's Centre Island estate. "I used to work on an oyster boat, and curse the people who lived here...'rich bastards, never worked a day...'"

"Now I live here. I'm waiting for the owner to come back and throw me out."

BOTTOM LINE A couple of classics talk zen and the art of classic motorcycle maintenance. As it must be, the result is both amusing and nostalgic.