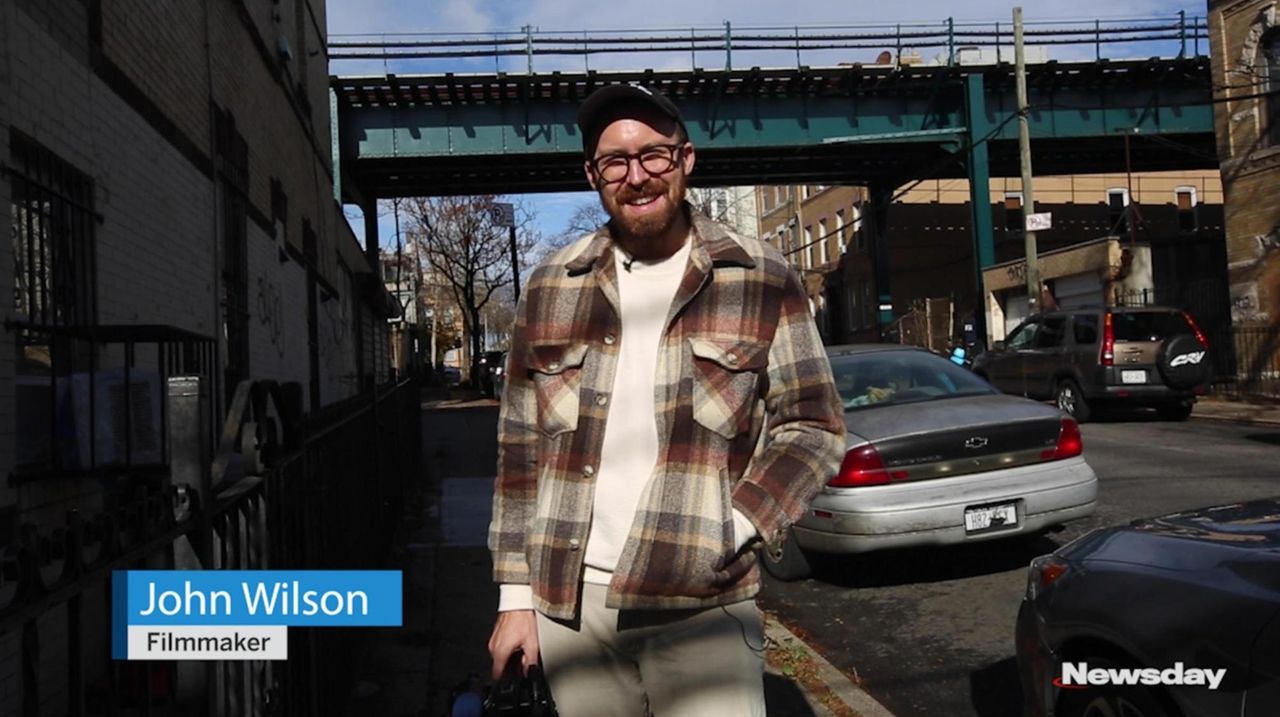 John Wilson, a native of Rocky Point, talks about his HBO show "How To With John Wilson" and how Long Island has influenced his creativity. Credit: Bruce Gilbert

One of the breakout TV comedies of the year was created by a Rocky Point native (now living in Queens) and which features tutorials on how to put up scaffolding.

Perhaps a few and we put those recently to John Wilson, 34, a TV tyro but veteran in the art of making people laugh (mostly his small circle of friends until now, he admits).

His show,"How to With John Wilson," wraps its 6-episode run Nov. 27 (with repeats on various HBO channels throughout the week; check program guides), with a tutorial on how to make risotto. The other episodes this season (available on HBO On Demand and HBO Max): How to make small talk, improve memories, wrap furniture, split checks, and (um) scaffolding.

How to explain "How To?"

Vertiginously quirky, for starters. Surreal, odd, weird, funny (very). It's "Seinfeld'' on mushrooms, or that famous kid's book, "When You Give a Mouse a Cookie," on them as well. It's about nothing or everything. Sometimes both. Explanations lead to unexpected outcomes — invariably unexpected, sometimes hilariously so.

Who are you exactly?

I was born in Astoria [but] spent pretty much my entire childhood on the North Shore. I was probably a bit of a nightmare for my neighbors because once I found my dad's video camera, it was pretty much over after that. I would make movies in the street every single day with my friends.

And all through high school?

We would make little documentaries, like one about the barber shops in the area — Anthony's right on Broadway, for example … There was lots of space to explore.

Were you comically inclined?

Always. It was this instant high I was chasing my whole childhood. My friends and I would sell DVDs out of the trunks of our cars. We would try to show them at school but we had a very conservative superintendent at the time, and he wouldn't let us.

Why? Scatological in nature? Did they promote school insurrection?

They were just, uh, complex themes — I think would be a generous way to put it … That was my first real taste of censorship and I've been trying to do things my own way ever since.

I think of you as a surrealist-found-comedy expert. What were you in those days?

One of the first things I made was called 'The Johnny Show,' and it was just me in my room, hosting a talk show and I feel like not all that much has changed. I eventually landed in the world of documentaries because it felt like the most interesting thing video could do, and that's how I got into 'tutorials.'

Then on to Binghamton University?

Binghamton was just an amazing kind of decaying upstate New York city that was a playground to explore and experiment in. I ended up making a documentary about balloon fetishists — one of those very strange subcultures that you can only discover in a place that hasn't been combed over.

Not exactly on the level of balloons, but there is a funny bit in the [Nov. 20] episode about check-splitting taped in a VFW hall in Franklin Square.

You still a Long Islander at heart?

Oh yeah, definitely. I'll always be a Long Islander [and] I do want to portray it as I saw it, and as much as I can going forward, just because it's strange when you grow up in a place, and you don't see it represented in a way that you know it to be. I like to show the nuances of a place like Long Island because people think of it as this kind of solid mass that doesn't really have much in the center of it.

After college, you were an infomercial cameraman?

It was just one of those jobs where I could emotionally vacate. I wasn't fooling myself into thinking that I was making art or anything. I get very touchy about compromise. [I was also] actually a cameraman for a day or two at News 12 — when I was growing up, my dad, who was very supportive, got me connected. I just sort of sat behind a tripod doing an infomercial when I was a teenager. It was very similar to what I ended up doing as a man/adult.

Why "how to" tutorials as a means of framing your comedy?

The tutorial is something that everyone's familiar with, so [as a viewer] you think you know what you're getting yourself into.

When did you start?

I would just basically show them to my roommates … Up until recently I was living with six people so it was a way of entertaining everybody. We were making our own entertainment instead of watching some dribble. [Laughs] You can make your own dribble [instead]!

There are a million possible tutorials in the big city. Why these six?

They just happened to be what I was thinking about at the time … and that's more or less how I come up with every film. If I'm really bothered by scaffolding, then I'm gonna make a movie about it. I haven't been green lit for a season 2, but I'm shooting three episodes right now, just because this is my natural resting state. I just don't want there to be any gaps in the coverage of my life.`

Nathan Fielder (star of cult hit "Nathan for You") is your executive producer?

I was a huge fan [and] we met randomly at a restaurant in Chinatown one night, at a gallery opening after-party, and he was there and just miraculously had recognized me and my friend from a movie that I had made. We just kind of hit it off immediately.

Any movement on the second season so far?

We have a meeting on the 30th to basically talk about what we would [but] I want to keep doing this for as long as I can. I was upset we needed to stop production right when the pandemic began because New York is more visually interesting now than it has been my entire life. The landscape has changed so dramatically and it's so ephemeral at the same time. My worst fear is that all of this stuff is going to disappear and no one will have documented it properly. That's what drives me to film — this fear of forgetting, or these kinds of precious things disappearing forever and there being no record of it.