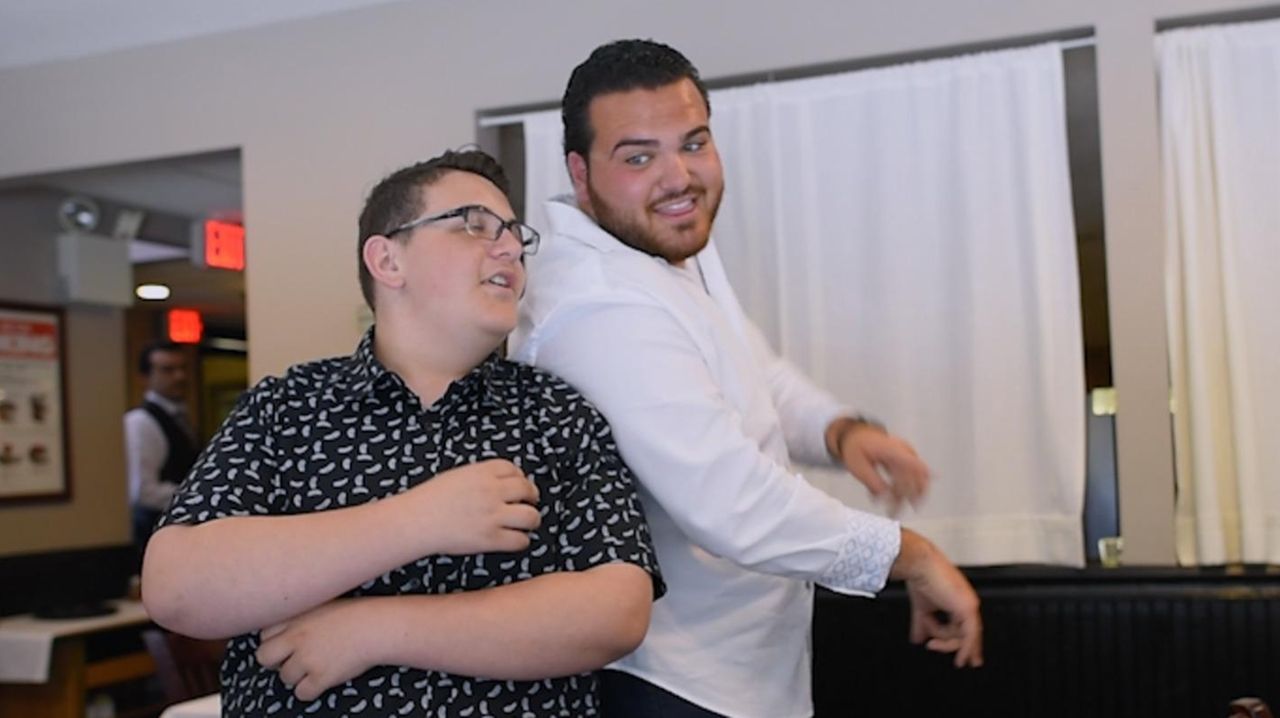 On Monday, July 10, 2017, "America's Got Talent" season 11 breakout star Sal Valentinetti, 21, of Bethpage, met Christian Guardino, 17, of Patchogue. Guardino is a contestant on season 12 of "AGT." They sat down at Piccolo Bussola in Huntington where Valentinetti gave Guardino advice on how to succeed and they both discussed getting the coveted Golden Buzzer. Credit: Johnny Milano

This summer, Long Island is experiencing a serious case of déjà vu.

In 2016, Bethpage’s Sal Valentinetti, 21, won America’s hearts by capturing the Golden Buzzer, advancing to the quarterfinals during his “America’s Got Talent” audition. He impressed the judges and the crowd by performing the Frank Sinatra classic “My Way.” After making it to the finals, Sal went on to tour nationally and, last month, released his debut EP, “The Voice.”

On June 13, Christian Guardino, 17, of Patchogue followed in Valentinetti’s footsteps as he, too, wowed the judges panel and the audience by singing Smokey Robinson’s “Who’s Lovin’ You,” also capturing the Golden Buzzer.

Christian, who will be a senior at Patchogue-Medford High School this fall, suffers from a retinal disease called Leber’s congenital amaurosis. He had corrective surgery at age 12 and now has approximately 20/70 vision.

Newsday couldn’t help but bring these two together to break bread and share strategy before Guardino performs live Tuesday night on “AGT” (8 p.m., NBC/4) in the quarterfinals.

At a recent afternoon lunch at Piccola Bussola in Huntington, it is clear how much Christian and Sal are connected by the way they order.

Sal gets visibly excited. “That’s my favorite! It’s your favorite too?” he says loudly.

“Now you are speaking my language,” Christian says with a smile, as Sal holds up two fingers to the waiter.

Not surprisingly, they are both fans of each other.

“I watched Sal’s whole run,” says Christian. “I was looking forward to meeting him the most.”

Sal was simply excited to see another Long Islander represent.

Much like the judges, Sal was floored the minute Christian opened his mouth.

“He was so nervous and I really felt for him because I know that anxiety,” says Sal. “There’s nothing that compares to that moment.”

Christian agrees and tries to put the experience into his own words.

“It’s just you and that stage,” he says. “You feel like you are in the middle of the ocean and there’s this big cruise boat where everyone is watching you.”

All of a sudden Sal’s phone rings. It’s his mom. (She calls a lot.) She wants to make sure he has enough tuxedos for his upcoming weekend gigs.

“As good as your manager is, he’ll never be as good as your mother,” says Sal, pointing to Christian’s mom, Beth, who was at the lunch. “My mother manages my manager!”

And so the counseling session begins . . .

Sal tells Christian that the “AGT” producers are going to offer ideas and suggests that he listen.

“Their job is to help you win and make America fall in love with you,” says Sal. “Sometimes you have to step outside your comfort zone and take what they have to say to heart.”

Christian admits to Sal that one of his regrets is that he felt he didn’t portray confidence in his audition.

Sal told him, “Take your personality and crank it up to 11 — just you, amplified. Keep a cool head, stay humble, but give it your all — nothing less than 110 percent.”

Christian is concerned that people might not be able to relate to him.

Sal insists, “You’ve been through hardship. People can relate because they’ve had situations in their lives where they have had to overcome something. That alone makes you relatable.”

“You didn’t get the Golden Buzzer for no reason,” Sal says. “You’re already a crowd favorite.”

Like a coach pumping up a prizefighter in the corner of a ring, Sal puts his hand on Christian’s shoulder, looks him in the eye and says, “Remember you are from Long Island. You are going to make us proud.”

LeVar Burton will guest-host 'Jeopardy!'
Hilary Duff to star in Hulu's 'How I Met Your Father'
Greta Thunberg docuseries amplifies her climate change fight
Burglary charge for 'American Idol' contestant
Another eye surgery for 'Today' co-host Guthrie
Sajak accidentally says answer on 'Wheel of Fortune'
Didn’t find what you were looking for?