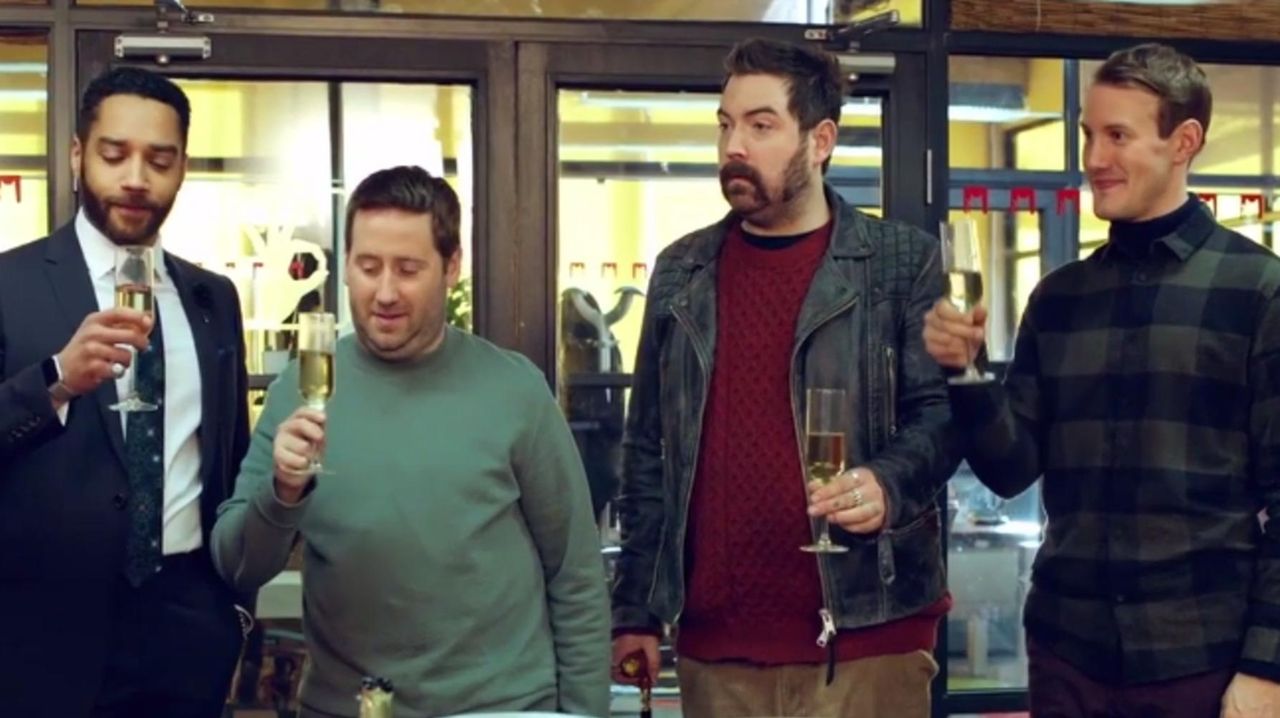 WHEN | WHERE Premieres Monday at 10 p.m. on AMC

WHAT IT’S ABOUT Four English friends from grade school strike it rich — really rich — when an American company buys their app about an online game with cats (think “Angry Birds”). Leon (Samuel Anderson) buys a Ferrari and wants to send a “told you so!” message to all those who ever doubted them. He hires a barbershop quartet for that purpose. Josh (Jim Howick) is the worrier and thinks maybe they should be careful with the money. Ewan (Jonny Sweet) is the insecure programmer. Then there’s Watto (Nick Helm). He’s the stoner, of course. But the piper must be paid: Casey (Mary McCormack) is their new American boss, and she’s coming to London. This seven-episode series is based on a 2007 Israeli series, “Mesudarim,” also about four pals who make a killing.

MY SAY “Loaded” would be terrific if it hadn’t been already done before, so maybe we should settle for “very good.” In fact, because that other established hit like this one is terrific, we may have to downgrade “very good” to a desultory, milquetoast “good.”

That’s not fair, but life’s not fair and TV criticism is the profound reversal of fair. Anyway, this isn’t about fairness. This is about tolerance — specifically yours for another show about four bros and their quest for killer app glory. The trick of the TV game is to be “Seinfeld,” not the show that’s like “Seinfeld.”

“Loaded” is like HBO’s “Silicon Valley” (which received another Emmy nomination last week.)

At least “Loaded” makes a compelling case for testing that tolerance. Foremost, there are some differences between the shows. “Valley” is about chasing the mirage, while “Loaded” is about the payday. “Loaded” is also written by a young WGA winner, Jon Brown, who once wrote for “Veep” and has grafted some of that classic’s tone onto this show. It’s scabrous and nihilistic, but unexpectedly warmhearted. There are some funny lines — and not just a few of them — that cut but never wound. “Catch you later, Magnum P.I.,” Casey says to the Ferrari-besotted Leon. Or, in a pang of guilt over his newfound wealth, Ewan says, “I’ve just had a wave of remorse for all the things I’ve said about lovely, lovely Chris Martin.” That second “lovely” is what makes this line so comically flawless.

After a while, the four guys establish their own identities, too, or enough so that you’re not constantly thinking about their “Valley” counterpart, like Leon = Bachman, or Ewan = Jared and so on. Like the “Valley” boys, they are barely post-adolescent, and occasionally pre-adolescent. Instant wealth hasn’t really changed them at all. They’re also utterly clueless — clueless like the pals in “Shaun of the Living Dead,” who are about to be overrun by the approaching zombie herd. These four are also about to be overrun. They barely know by what or whom.

About her: As the self-proclaimed “sexy Darth Vader,” McCormack’s Casey is both den mother and Nurse Ratched. She’s going to whip her brood into shape if it kills them, which it may. McCormack gets some of the best lines, and slays her scenes, especially the first one when she’s on Skype from New York. "Spin me around," she tells the boys, who turn around the laptop as instructed. "Now put me down." Try not to laugh at that moment. (Good luck.)