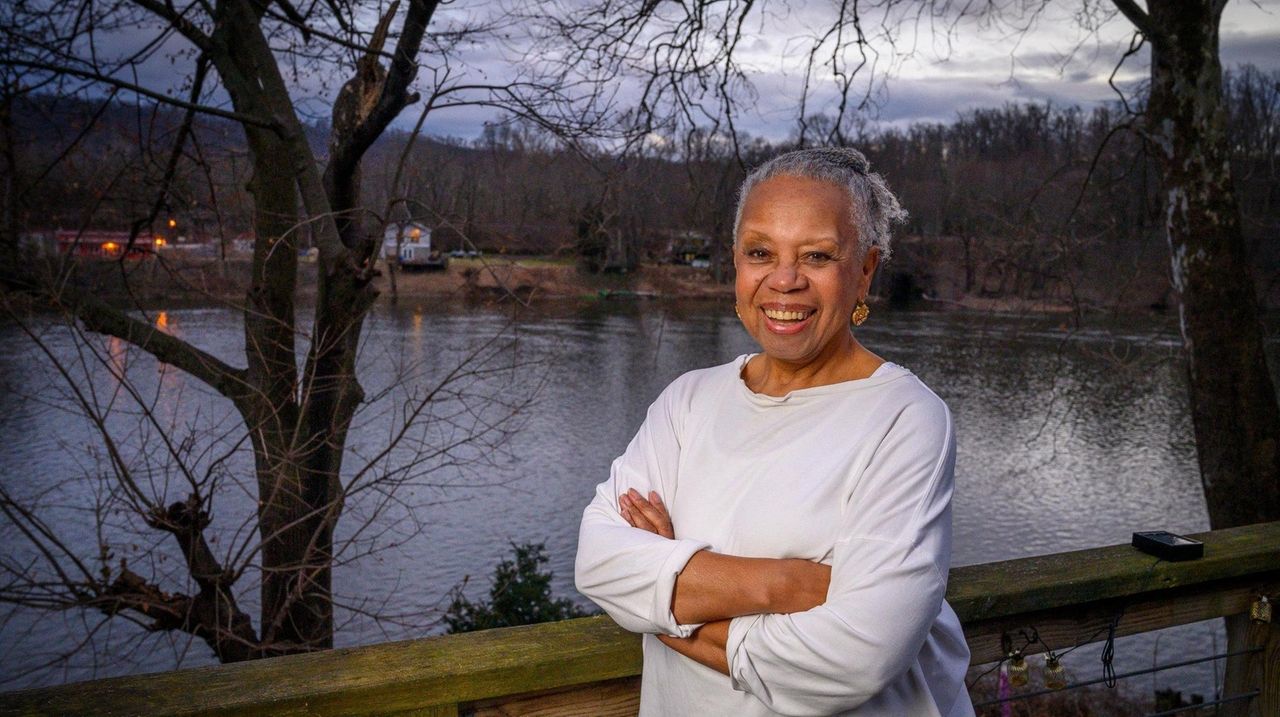 Former News 12 and WABC's “Eyewitness News” anchor Melba Tolliver, now 81, is enjoying retirement in Bangor, Pennsylvania. Newsday checked in with her as part of our "what ever happened to" series. Credit: Newsday / J. Conrad Williams Jr.

Melba Tolliver now lives quietly in a house overlooking the Delaware River in eastern Pennsylvania. But once, she was a giant of New York TV journalism. Ohio-raised Tolliver, 81, made TV history a few times. She was the first African American to anchor a network TV news broadcast, and member of New York's first female co-anchor team. She launched trailblazing local shows ("Meet the People") that focused on everyday New Yorkers, or on women's issues ("Consciousness Rising"), and built a national profile with a network one ("Americans All").

Then, there was the hair. In 1971, she was reprimanded by Ch. 7 for wearing her hair naturally as a reporter to cover the marriage of Tricia Nixon and Edward Cox. She then became something she never wanted to become: A story. A big one.

We spoke recently about this remarkable career.

You first arrived in New York in 1959 to become a nurse?
I graduated with a diploma from New York University-Bellevue worked as a scrub nurse in Bellevue's OR, then ER. That's when I realized I didn't have the right stuff for a bedside nurse — to balance compassion and sternness. If a patient needed to be suctioned and said to me, "Oh, Miss Tolliver, please don't do that," I'd say, "OK, I won't."

You were a young African American woman in the big city in the early '60s at a moment of sweeping change. How did it affect you?
First, the term 'African American' was not used at that time. I was 'colored' or the 'colored girl.' But 1963 was the year when things really came together for me and made me come to certain conclusions that I still hold and some I now question. [It was] the year George Wallace declared "segregation forever," Lyndon Johnson was sworn in, little girls killed in the bombing of the 16th Street Church in Birmingham. The murder of Medgar Evers.  Thousands marching on Washington. That year had a tremendous impact on my thinking.

Exactly how?
The New York Herald Tribune published a series of articles, "Ten Negroes" [about black Americans], by national correspondent Robert Byrd [and] I wrote a letter to Byrd — not a friendly letter — saying I was so fed up with his series and that he was not taking the pulse of ordinary everyday people like myself and that as far as America was concerned, we colored people, we Negroes, were Americans and we weren't going anyplace. I was working as a secretary at a pharmaceutical company at the time. A few days later, he called to ask if he could publish it and they did, under a bold headline, "An Angry Woman ..."

Why was this so pivotal?
It proved to me that I have a voice and that I wanted to try to do something with it. I suddenly saw the power of words, the power of communications. I saw a 'female wanted' ad in the Times that said ABC is hiring secretaries [and] thought, 'what does it take to be a researcher' [there]. I gave myself six months to find out [then] AFTRA called a strike of its on-air people.

You then become the first black person — male or female — in U.S. TV history to anchor a network news program?
ABC had an afternoon program anchored by Marlene Sanders called "News with a Woman's Touch," and when she left the air, they assigned a man to anchor it in Marlene's absence. The show's sponsor, Purex, wanted to know, "don't you have any women working there?" My boss said, "maybe my secretary can do it — she's been a movie extra!'  In fact, I'd appeared in a couple of magazine ads.

Did you realize you had just made history?
[Laughs]. I still had dreams of becoming a researcher. The strike ended and around the same time, the Kerner Commission report [into the causes of the 1967 riots] comes out. ABC then set up an in-house training program [and] I became a guinea pig for it.

Where did you think that would lead?
Well, God protects babies and fools and I was too foolish to be scared, but I did see the upside of it. Because ABC didn't have a real program, I was able to design what I wanted to do.

This was your apprenticeship?
There were people who resented me, as the strikebreaker, and I couldn't do much of anything but stand around and rewrite wire copy. [But] I got to know [other reporters like] Mal Goode [one of network TV's first black reporters] who'd let me go out on assignment with them. Mal really took me under his wing.

How did you finally break in?
In most people's minds, I was still a scab, but not long after [the funeral of Robert F. Kennedy] the WABC local news director called and asked if I'd be interested in being a summer relief reporter. After the riots and the Kerner Commission report, news organizations rushed to recruit black reporters. When ABC hired Al Primo, who also created 'Eyewitness News' as news director, he sent reporters into neighborhoods to cover stories, then have them come back to the studio to give their reports live, rather than leave it up to the anchorman. It was quite revolutionary at the time.

What was it like at Ch. 7 in those days?
It was a stealth operation. There was no audience and people used to joke that even our relatives never watched 'Eyewitness News." The good side was that if nobody watched, you could test all sorts of things. It was better than being at the networks because network correspondents had to fight to get on the air. We had to fight to get off.

You also began to anchor various shows, including one with another pioneer, Gil Noble.
Gil was more comfortable solo but I was his co-host [on the weekly 'Like It is'] longer than anyone else. That's where I met Toni Morrison for the first time; she had just written 'The Bluest Eye' and was huge in the publishing business [as an editor] but was otherwise just making her name.

Now the "hair" question, and I'm not talking about the play. In 1971, you are assigned to cover the marriage of Tricia Nixon, but decide to wear your hair naturally rather than artificially straightened. The station pushes back and you become a national story. What happened?
I'm told the station manager said, "When I saw her on the news last night it scared the hell out of me. I wanted to jump and hide behind my couch." Primo said, 'I don't like your hair. You no longer look feminine …' I explained to him that what he had been seeing was not my natural hair, and he kept saying no, "that's not your real hair." I said, "yes, this is how my hair really looks." He said, "you're going to have to change it back." I went home and cried.

The next day I went to Washington, and was told, if you won't change your hair, you won't appear on film. The signature of 'Eyewitness News' was that reporters were eyewitnesses so how were they going to do this? They canceled my studio appearances, canceled my appearance on the local morning show, "AM New York," canceled everything and I was edited out of the film. I was reprimanded, but somehow the story was leaked to the New York Post, and that was the end of it. But believe me, I was not unafraid during that time.

You left Ch. 7 in 1976 then return a year later to WNBC/4. Why?
I got a midcareer fellowship at the University of Michigan [and] WABC had said it was OK to take the fellowship but would not guarantee a job when I got back. Someone said, 'maybe you should get an agent.' I did …

How did Ch. 4 go?
They were trying to decide who was going to co-anchor the 5 p.m. news and decided [on me]. I hadn't agreed to be the anchor [but] the news director, Norm Fein — who is a friend to this day — said if you say "no," the company will never forget it. I said, 'Norm, if I say yes and it's a flop, the company will remember that too.' I agreed to co-anchor with Pia Lindstrom and we became the first all-female anchor team in the market. [Later] a new news director came in whose main job — I was told — was to get rid of me. I had given them lip about anchoring and they held it against me. I was labeled a troublemaker."

Then you leave and make history again — as the anchor, along with Bill Zimmerman, to launch the nation's first all-news local cable network, News 12, in 1986.
It was exciting to be there at the start.

You once said, and I quote, "Long Island is a hotbed of interesting issues that relate directly to mainstream America." Elaborate?
It was kind of a microcosm, in terms of race, educational opportunities, housing, employment. Those were the issues that plagued America. It also had close knit communities, where you could be identified immediately if people knew that you came from a certain part of Long Island. It was fascinating and it took a while to understand it.

Why leave?
Our contracts were not renewed. Bill and I had served our usefulness. We were well-known anchors in New York and brought in to get [News 12] attention and whatever kind of credibility we could bring to it."

You now live in a remote and rural corner of Pennsylvania. Nice, but why there?
I was friends with a woman who had a weekend place out here and I was out here one weekend in the guest bedroom and could hear the river over the rapids. It was so peaceful, I thought: This would be perfect.

What ever happened to these New York TV legends?