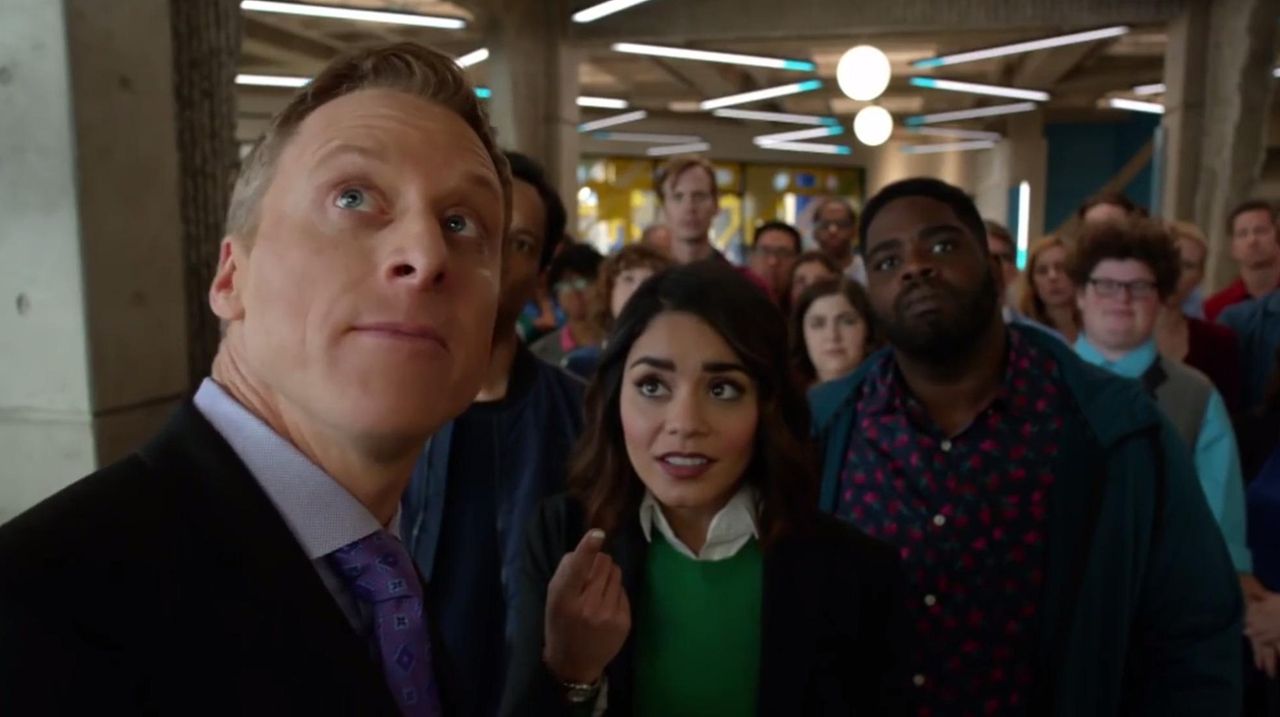 "Powerless" is a new NBC comedy about a  woman who begins her job with a company specializing in products that make everyday citizens feel safer around damage caused by super heroes and villains that live among them. Credit: NBC

WHAT IT’S ABOUT When perky, upbeat Emily Locke (Vanessa Hudgens) starts her first day as director of R&D for Wayne Security, a subsidiary of Wayne Enterprises — based in Charm City — she is charged by her new boss, Van Wayne (Alan Tudyk), to come up with a new app that will save both the struggling division and powerless human bystanders who are collateral damage in the ongoing war between superpower heroes and superpower villains.

The chief executive of Wayne — you know him as Bruce Wayne — also wouldn’t mind getting a new weapon in his war against evil, which he wages in another alter ego (you know him as Batman). At first Emily gets some pushback from her new colleagues, chief engineer Ron (Ron Funches) and chief design officer Teddy (Danny Pudi). Then, the employees at Wayne get some sobering news.

MY SAY “Powerless” is another one of those newfangled high-concept comedies that demands words like “charm,” “whimsy,” “inventive,” “serendipitous” and “amiable” appear in all reviews — or the ones that don’t include the words “dumb,” grating” and “precious.” At least most available evidence — Thursday’s pilot episode — does make a stronger case for the nice words.

There is plenty of charm here besides Charm City, and invention, too, all adorned with — occasionally smothered in — quirkiness. Meanwhile, “Powerless” poses a compelling comic question, if not quite a fully formed comic idea over these initial 22 minutes: What about us average humans who have to pick our way past the apocalyptic battles between the forces of good and evil? Who’s looking out for our interests, or at least our personal safety during these periodic and invariably seismic events?

“Powerless” has the imprimatur of DC Comics, so you may start to suspect this is all just a mischievous and good-natured poke at archrival Marvel, where “seismic” destruction really does mean seismic, like during the Battle of New York — aka the Incident — when Loki and the Avengers reduced midtown Manhattan into a smoking rubble pile. The actual supervillains of “Powerless” appear a little less ambitious. One, for example, warns the citizens of Charm City to “kiss your organic juice bars goooodbyyyyye!!!”

You already know about the cast, and how good it can be — or should be. In his first return to an NBC series since “Community,” Pudi plays a variation of Abed Nadir — with Abed’s cosmic psychosis taken down a notch or two here. “Undateable” fans (yes, there were a few) will recall Funches’ Shelly on that NBC series. Hudgens (most recently Betty in “Grease Live”) gets top billing, but Tudyk may be the bigger draw, or at least his voice is: He was K2SO in “Rogue One,” and Duke in “Frozen.” Tudyk also happens to be one of those rare performers who’s usually good in whatever he does, face included.

BOTTOM LINE Funny idea that doesn’t quite attain the level of “funny show,” but a good cast along with a few good lines indicate this superhero sendup will eventually get there.

LI is the star in HBO's 'The Gilded Age'
1:00
Billy Joel starred in a 1980s sitcom? He does in this alternate reality
HBO leads GLAAD Media Awards for LGBTQ representation
'Harder They Fall,' 'Insecure,' H.E.R. nab NAACP award noms
LI's Kilmeade to host Saturday-night show on Fox News
1:00
What if Billy Joel starred in an '80s sitcom?
Didn’t find what you were looking for?