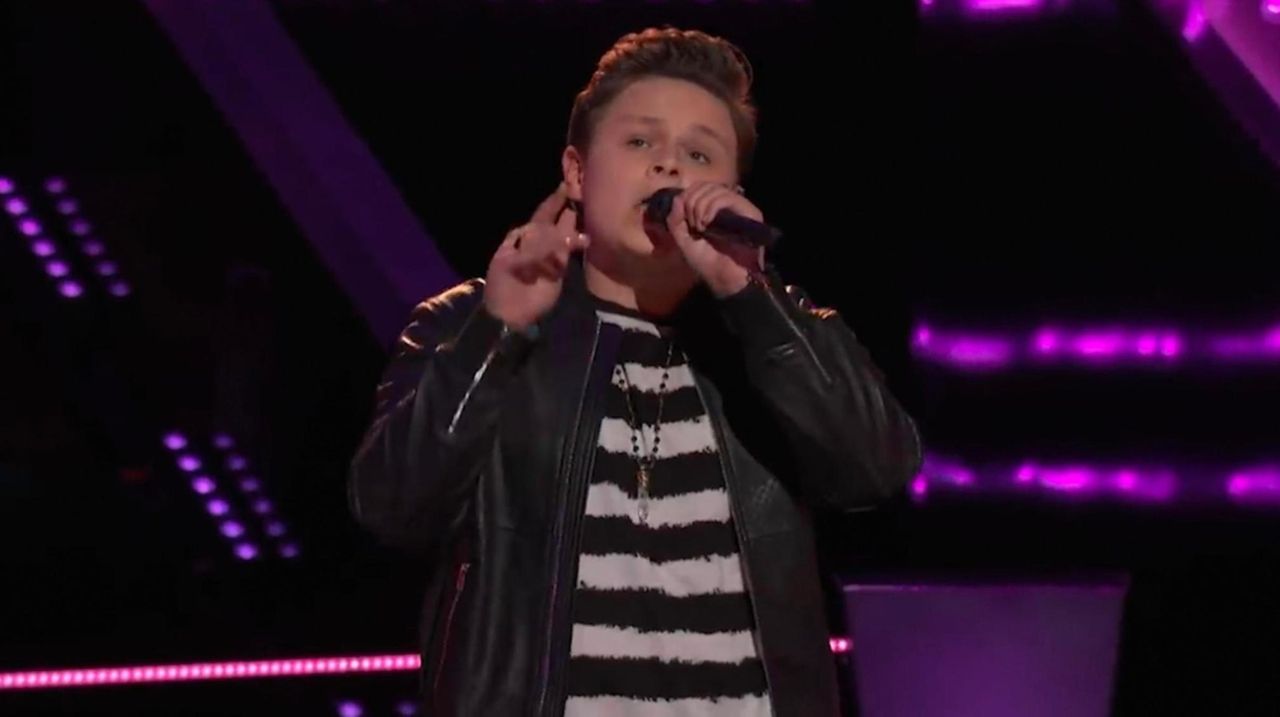 Carter Rubin of Shoreham discusses his Battle Round performance on the Nov. 16th edition of NBC's "The Voice." By his side is his mother, Alonna. Credit: The Voice

Shoreham teen Carter Rubin, whose Nov. 16 victory in the Battle Round of NBC's singing competition "The Voice" has propelled him to this Monday's Knockout Round, is taking time in-between to is reflect on his progress.

"The whole experience was amazing," he told Newsday of competing last week against 15-year-old Larriah Jackson to retain his spot on pop star Gwen Stefani's team. Rubin — age 14 when that Battle Round was shot over the summer — traded solos and sang in harmony with the equally talented Jackson on "Like I'm Gonna Lose You" by Meghan Trainor featuring John Legend. After Rubin's narrow victory, Stefani used her one Battle Round "save" option to keep Jackson in the running. Rubin fights for his place next week in the Knockout Round.

Speaking via Zoom from home alongside mom Alonna Rubin, Carter Rubin recalls: "It didn't even feel like a battle. It felt more like just an awesome duet that me and my friend were doing. And when Gwen called my name, it was super humbling and I was just really happy and proud of myself and grateful that she saw something in me that she wasn't ready to let go of yet. … And I was even more happy when Larriah got saved." In the episode, Carter jumped for joy and yelled, "Yes! Yes! Whooo!" when Stefani threw Jackson the lifeline.

Stefani had picked the song for the teens to sing. Songwriter Trainor, in a Spotify commentary for her 2015 album "Title," said the song is about having nightmares of a loved one dying, "and you wake up sweating and crying, and you go check on them and they're still there and you realize that you're not promised tomorrow, so you're going to love them like you're losing them." How does a 14-year-old call up that kind of grown-up emotion?

"I was thinking about my family," the Shoreham-Wading River High School sophomore says. "The song really makes you think about how … you don't want to take a day for granted. I was just thinking about my family and how much I love them, as if I were to lose them …. Just kind of being grateful for what you have right now." His family includes dad David, older brother Jack and maternal grandfather Ric Mango, a singer who for years fronted Long Island's Ric Mango Orchestra.

Rubin and Jackson rehearsed the song on their own in addition to formal rehearsal time, Rubin said. "There's actually a room in the hotel with a thing of Plexiglas between me and my partner, so we can practice our duet without worrying about social distancing."

Other COVID-19 precautions for the show’s contestants, says Alonna Rubin, 46, included the de rigueur masks and social distancing as well as "no hanging out in each other's rooms or sitting together at tables. But they managed to make opportunities" for the contestants, such as "sitting at this restaurant outside, but at different tables, and you could interact [with other contestants] sitting in the lobby."

The Rubins' Shoreham neighbors interacted with the family in a community-minded way the night Carter's initial blind audition aired on Oct. 26. A family friend "put together a parade for him," Alonna Rubin says. "They did a big parade going in front of our house with signs and balloons. It was really, really wonderful." Because of the coronavirus pandemic, "We couldn't have a big watch party or anything like that for his episodes, so just an amazing amount of support. You know, when they say 'Strong Island,' I never really knew until now how that really is true in the communities of Long Island."