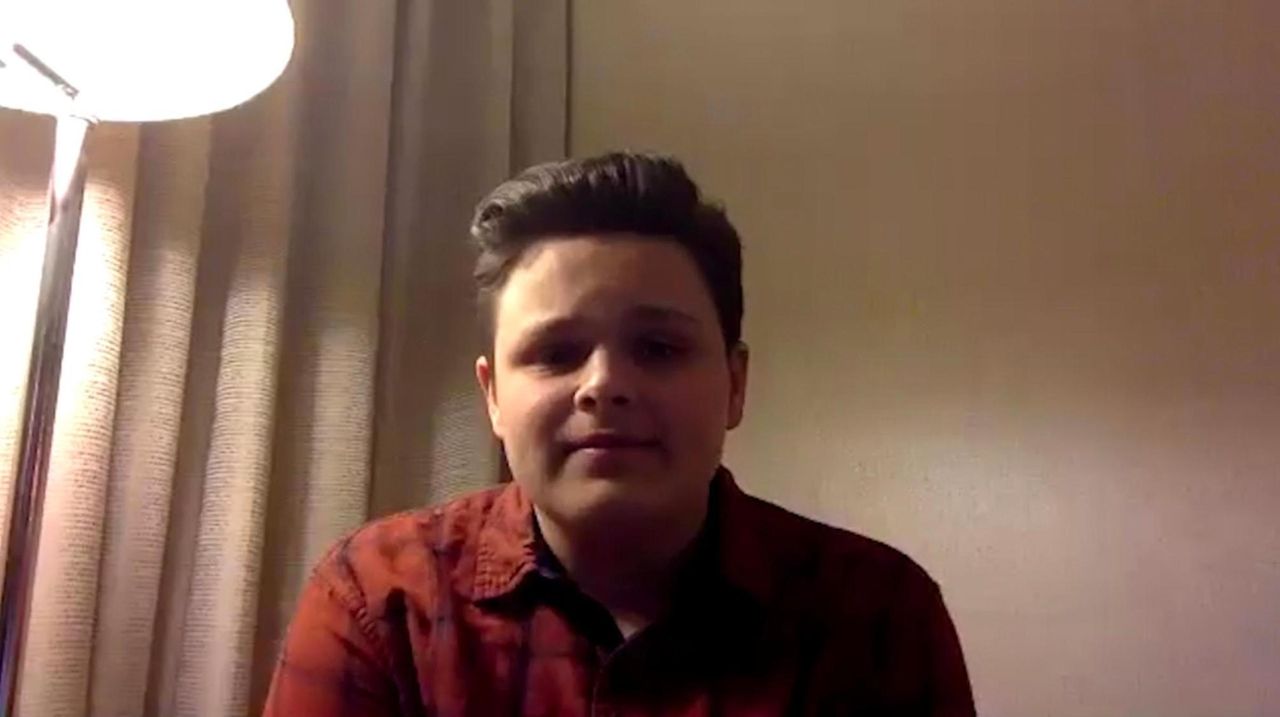 Long Island's Carter Rubin advanced into next week's finals on NBC's "The Voice." and talks about the excitement around the competition. Credit: Newsday

Win or lose, he says he finds himself grateful and astonished someone his age has made it to the finals.

Shoreham teen Carter Rubin, who learned Tuesday that he is advancing to next week's finals on the NBC singing competition "The Voice," credits his parents with stemming any nervousness he feels.

"I have pep talks with my mom and my dad over FaceTime," the 15-year-old singer says of Alonna Rubin, an autism-foundation chief who is in Los Angeles with her son, and David Rubin, a financier who has remained on Long Island with the couple's elder son, Jack. "I can't really, like, get out of my own head on my own before performances," Carter Rubin tells Newsday. "So I definitely need some of their help and advice before I go on. And it's always really helpful because they always know just what to say."

The Shoreham-Wading River High School sophomore had elicited proud tears from Gwen Stefani, his pop-star coach on the show, with his performance of "Rainbow Connection" from "The Muppet Movie" on the live semifinals Monday. Stefani had chosen that number because "everyone knows and loves that song," he says, and with that baseline established in the audience's mind, "She wanted me to put my own little modern, Carter twist on it," he says. "I changed the arrangement a little, just kind of to make it my own."

Stefani had advised him to deliver the song as "more pop than like a musical," he had said on Monday's show, which he took to mean, "Putting my own little runs and twists and accents on it to make it more modern as opposed to musical theater. I worked really hard on it, for sure. … And I think I was successful in doing that, because Gwen really seemed to love it. She was crying and I was really happy that I made her proud."

Rubin's schedule while in Los Angeles for the show "looks a little different every day," he says. In addition to some hours of private schooling each weekday, provided by the production company, "I rehearse, I go to the studio and record, I work on my staging, do everything it takes to prepare for a big show night." Rubin does, he notes, have some off time. "I can't work for a certain amount of hours because I'm a minor, and California labor laws [for children doing film and TV] are really strict."

Stefani — one of four mentors with their own teams on the show, alongside singers Kelly Clarkson, John Legend and Blake Shelton, her fiance — does not coach him every day, and Rubin relies on other show-supplied coaches. "There's a vocal coach, there's a staging coach, there's the bandleader," he says. "And they're all really amazing and make sure that you're prepared."

Win or lose, Rubin says he's grateful and astonished that someone his age has made it to the finals.

"There's no losing because I've already made it this far," he says. "I think the biggest win for me would just be me being happy with the performance that I put out onstage. … I have a really good song that I'm going to sing. I will also be singing a duet with Gwen and I also have an original song. That's three songs that I have to learn for the finals next week. But I'm just excited. I'm going to go onstage and just show what I can do."