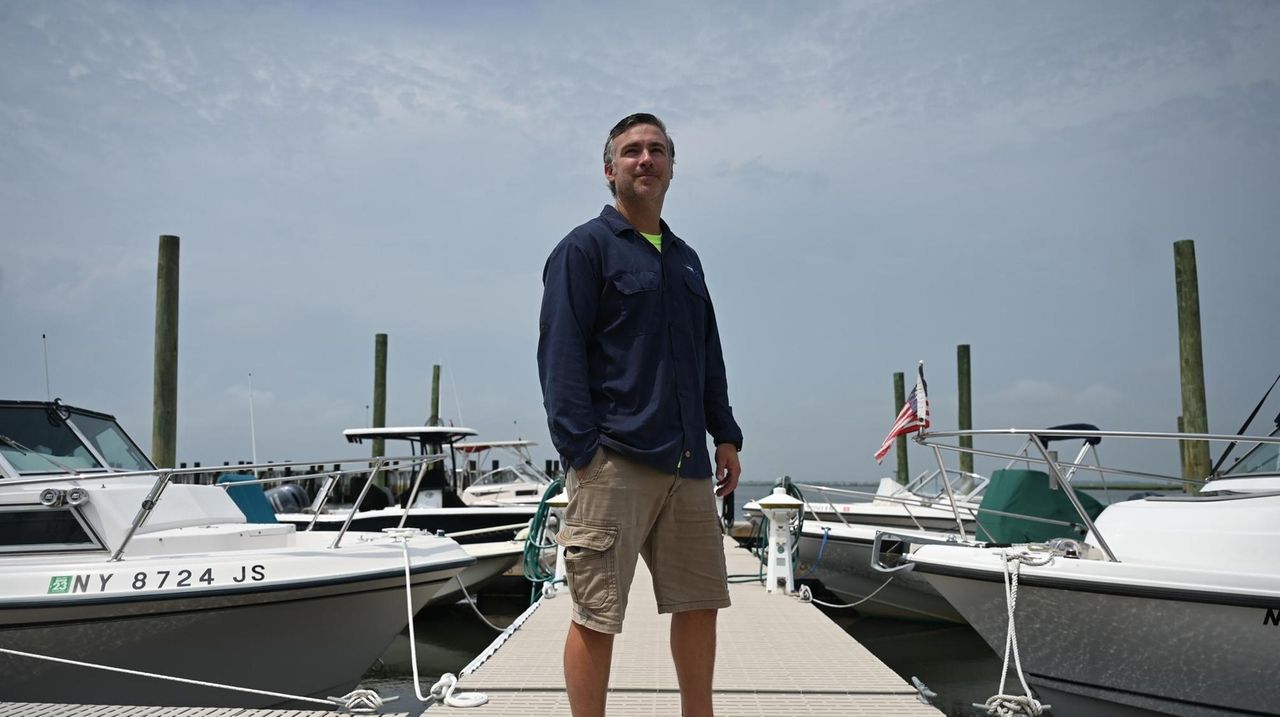 Montauk-based marine biologist Dr. Craig O'Connell explains what you can expect to see on his Discovery show during this year's Shark Week. Credit: Danielle Silverman

Shark Week is here and — more than ever — so is Montauk-based Dr. Craig O'Connell, the Discovery channel's go-to shark expert who stars in seven programs this year (including "Return to Lair of the Great White" at 10 p.m. Wednesday).

O'Connell — who, along with his wife, Dr. Nicole O'Connell, a pediatrician, is co-founder of Montauk's O'Seas Conservation Foundation — has a core goal in life and on television: To save sharks. That goal was complicated this past year when he contracted COVID-19 in an area hospital when his son, Grady, was born. Debilitating "long haul" symptoms sidelined him right up until the week production began.

We recently spoke from Point Lookout about his favorite subject.

What brings you to Point Lookout?

This is where we started the nonprofit [educational] foundation. I did my Ph.D. at UMass-Dartmouth, and wanted to see if there were sharks in my own backyard — gone fishing my entire life off Long Island — and also wanted to see if the techniques I'd developed [in graduate school] worked here. Literally my first season out of Point Lookout I caught a nine-foot Great White. That was the start of our nonprofit.

You're unusually busy this "Shark Week." So COVID did not slow you down?

I got COVID back in April [2020] right around the time when Shark Week made me part of the official talent. I was super sick and told my wife this might be bad timing. There was a point where I was laying on the floor of the shower because I couldn't breathe. Then, I got over the hump and became a 'long hauler,' with back pain and fatigue. As soon as [production] started though, the symptoms went away and I got the seven episodes done. I'm especially proud of 'Ninja Sharks' [Friday at 8 p.m.] part of which was filmed in Montauk in June of last year."

There have been few shark sightings around local waters this summer compared to last year. What's going on?

What sharks are doing poorly in Long Island waters?

The short-fin mako. Their populations are plummeting and it's a global threat. They are now considered endangered but unfortunately people can still go out there and kill them which to my mind is like killing a Bengal tiger. It's one of the most iconic sharks we have here and one of the fastest [fish] in the ocean. But they're still caught in Long Island catch-and-kill tournaments. I think they should be changed to catch-and-release and maybe some day in the future they will be.

One of your episodes ["Rogue Tiger Shark: The Hunt For Lagertha," Discovery+, Saturday] is about the search for a killer tiger shark off an island near Costa Rica. Any chance of a "Lagertha" here?

I've seen tigers pushing 14 feet in the Hudson Canyon but no reports of them coming closer to shore, except for pups. The chance of getting bit by a shark is super-rare [anyway]. You are more likely to get killed by a vending machine. I don't want people to fear going into the water. We're not on the shark's menu.

The so-called "Ninja" turns out to be a thresher — with extremely long tails. You were surprised to find them off Long Island?

The only reason I did was because fishermen told me. For years I've wanted to see them off Long Island, but always called them a ghost shark because I didn't think they were here, but on this one particular reef [off Montauk] they're everywhere. They've shown up on the same day for the past four years. My goal was to find out why.

Spoiler alert: For food! Yeah, these massive schools of menhaden [that turn up] when the temperature is just right.

Some of your episodes — notably last Sunday's with the cast of "Jackass" — would seem to detract from your scholarship. Do you agree?

I like to have fun and those episodes serve a purpose by educating the fans of those celebrities. You take them out and they start to love sharks too — then share that experience with their fan base … Sharing your knowledge comes in different forms.

As a prominent shark ambassador, are you optimistic or pessimistic about the future?

A little of both. These shark tournaments are resulting in major mortalities [but] I like to show [my students] them so they can see people hang up these trophies with their mouths open. They don't like what they see. I'm optimistic because people are beginning to care about sharks and learn about their importance.

Who's next? Jodie Whittaker to leave 'Doctor Who' in 2022
Margaret Cho joins cast of 'Fire Island' movie
7:26
The Buzz: Michael Bishop talks about 'Spin,' his upcoming Disney movie
PBS' 'Arthur' to end after its next season
New 'Exorcist' will have Ellen Burstyn, but not Linda Blair
LeVar Burton: 'Jeopardy!' host gig began 'scary,' ended fun
Didn’t find what you were looking for?