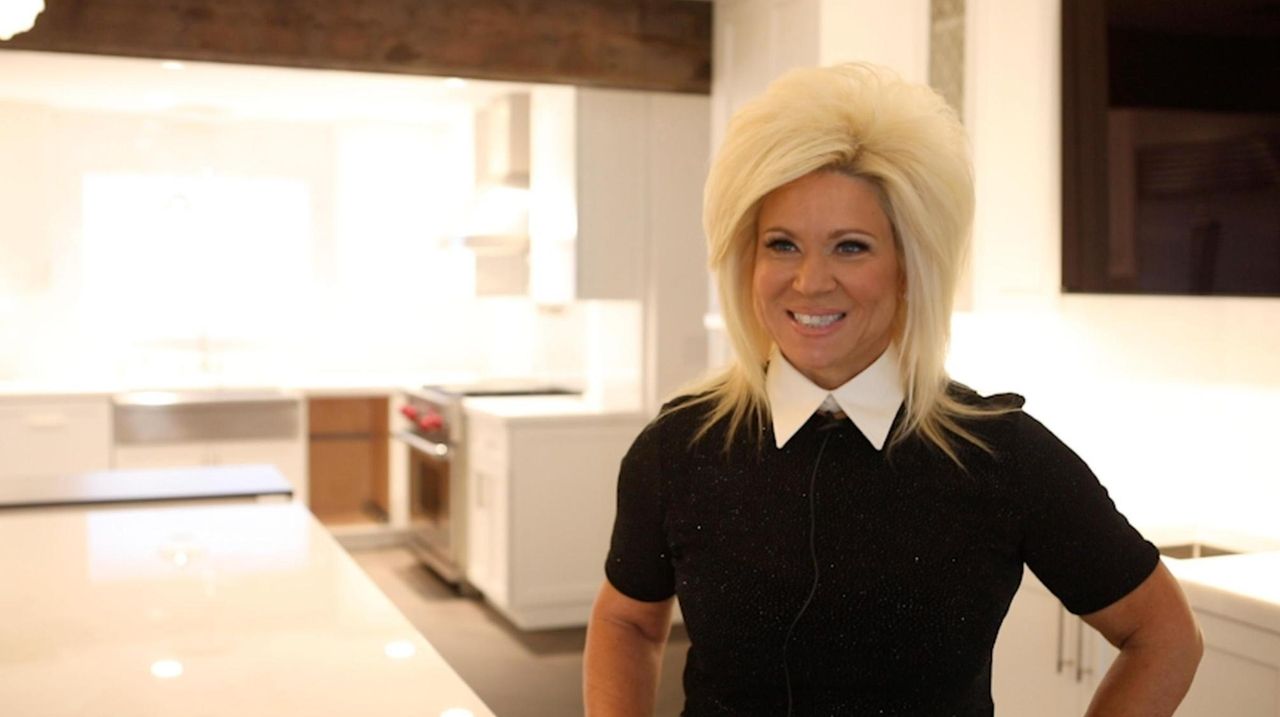 The best way to interview Theresa Caputo may be by phone because in person, there could be complications, or shall we say, eavesdroppers. One can't be certain if "Spirit" has arrived unannounced, along with some other soul, too.

Caputo admits that she feels nothing, sees nothing, about any person she talks to by phone. She seems almost dejected by the idea that Spirit, her famous consort, is silent during those encounters.

Caputo, naturally, is not.

In a recent phone interview, she said, "I went a whole day without turning Spirit off" for an episode of the new season of "Long Island Medium" launching Oct. 18 at 9 p.m. on TLC. "So from the second I got up, my crew was there, and everywhere I went, every time Spirit interrupted, I said 'mind your own business.' … When I wrapped up my day, I was meeting Victoria [her daughter] for dinner and walked into a restaurant and [she said] 'What happened to you!' I didn't realize that a lot of my physical appearance had changed."

She doesn't elaborate further, but she does laugh — the famous Caputo laugh that's part honk, part howl. Had her hair gone from "big" to flat? Had she lost those epic Caputo fingernails? Had the sparkling Christian Louboutin pumps been replaced with a pair of Doc Martens?

Had Spirit, in other words, exacted revenge?

As readers of her three bestselling books and viewers of her long-running series well know, Spirit is Caputo's self-described "gift," and her self-described direct link to the dead. Spirit is also the cash cow because without Spirit, there is no show, no books, no jewelry line, no national tour, no renown and certainly no controversy.

Fourteen seasons and nearly 10 years in, Caputo is easily Long Island's most famous television personality, and Long Island's TV ambassador to the world, albeit a complicated one. She's a natural-born performer full of charm and warmth, with an accent that could come from only one place on earth (hometown Hicksville). She's also been turned into a near-classic Kate McKinnon impression on "Saturday Night Live," and there have been many others.

Then, there's that controversy and Spirit has to shoulder some of the blame there as well. Critics have long charged mediums like Caputo with fakery — using tricks like "cold reads" (picking up obvious clues) and "hot reads" (doing research) on their subjects. In a brutal takedown of TV psychics and mediums, including Caputo, on "Last Week Tonight" in February — which was based on a Pew Research Poll that found 40 percent of Americans believe in them — host John Oliver said "at best, it’s reckless for people to take a stab at ventriloquizing the dead." He then added, "when psychic abilities are presented as authentic, it emboldens a vast underworld of unscrupulous vultures more than happy to make money."

It's easy to imagine what critics would have to say about the reading Caputo conducts with the Schillizzi family of Massapequa Park in the 14th season-opener. Their daughter, Brooke, 4, and her grandmother, Maria Karpinski, 68, died in a New Hyde Park house fire on Dec. 30. While the family is convulsed in tears, the Long Island Medium maintains her composure. All of which leads to this: Who exactly is Theresa Caputo and how could anyone possibly do this for a job? For "money" and "TV fame" seem almost too cynical under these circumstances.

Born Theresa Brigandi in Hicksville in 1967, daughter of Veronica and Nicholas Brigandi — he was elected Nassau County water commissioner in 1980 and both parents still live next door -- she suffered from anxiety as a child and young adult. For help, she sought out Pat Longo, a Long Island-based spiritual healer and family friend from Hicksville, in 2001.

Longo said in a phone interview that when Caputo first approached her, "she was afraid of everything. She couldn't drive in the backseat of a car, couldn't go into an elevator, or airplane, wouldn't eat in restaurants. Her anxiety was very strong, not my worst case, but one of my worst cases of anxiety and fear." When Caputo eventually went to one of Longo's classes, another medium told her "'this is going to happen.'"

"This" would be her professed ability to talk to the dead.

Caputo began readings at the family home when a friend suggested she meet Jonathan Partridge, a former MTV producer from Wantagh who would go on to create "Long Island Medium." Partridge recalled in a 2018 podcast that he was sceptical before meeting her, but then she "read" him — accurately — and he was sold.

Both show and host were hits on launch in 2011, with Partridge saying the "secret sauce was you laugh one minute and cry the next." Celebrities came on the show and so did family members, who are the other big part of the secret sauce. She and her husband, Larry, split in 2018, but he remains part of the new season, via cellphone.

In an email, Partridge -- who co-developed the show with Courtney Mullin -- said, "I do believe in mediums and I believe that our loved ones are still with us when they die. Sure there are a few 'bad apples' out there but Theresa has a gift and is the real deal. The validations in her readings are so specific that they must be coming from spirit and there's no way you can make this stuff up."

In the podcast he said that "one of the things that drove me nuts" was when critics said she had been prepped before readings. "There is no way I would let that happen — ever, ever ever."

As she always has, Caputo says she welcomes her many skeptics and critics, and has ready-made rebuttals, beginning with, she's "not out to convince anyone," or "Cold reading? I don't even know how that works." A lifelong Catholic who still attends Holy Family Church on Fordham Avenue in Hicksville, the church also frowns on mediums.

She laughs when asked about that: "Listen, they're taking my money every week, aren't they?"

"I'm not here to put my own personal views on this," she says. "I share my own community with Spirit and what I've learned. I am a practicing Catholic and it took a long time to incorporate my gift with my faith, but as long as we believe in something — whether someone is Jewish, Catholic, Buddhist — it doesn't matter, as long as we believe in something. What I've learned is that when someone loses someone, sometimes they lose their faith in God, or in the afterlife, and what Spirit does is to restore that faith."

WHAT'S AHEAD THIS SEASON?

The new season of "Long Island Medium" will be much like the past 13, absent her longtime foil, Larry, who now lives full time in California. "It's easy for people to assume or blame things on [the divorce] but in life this is what we do — we change, we grow and sometimes a couple grows together and sometimes separately. I'm proud of how Larry and I handled it." Victoria is getting married, so expect countless segues to wedding preparations.

Meanwhile, the vertiginous shtick of "LI Medium" — that laughter one minute, tears the next — isn't going anywhere either. "I may be playing to cliche and stereotype and so be it," says Howard Lee, TLC president who developed "Medium" for the network, "but people who are Long Islanders have a knack for being brash and honest, and that's what she is. You can't fight the words 'Long Island' in the title. That's a big part of what this is, living her life out loud."

But in the end what remains so complicated, so fraught, is the question that has dogged show and star from the beginning. Is it all just another circus act that plays to the credulity of desperate people?

During that brutal read with the Schillizzi family, Caputo begins by saying she knows nothing about them. (Lee adds that "when she goes in for readings with individuals we do not prep her, nor do the producers prep her.") Later, by phone, Caputo says "I don't know how people [overcome their grief]. They will say 'I look up to you' and I will say to them, 'You are my idol. I don't know what it feels like. I don't know how this is going to help you. I know it's not going to take away your pain [but] in some small way you'll find some peace in knowing that your child is still with you.'"

Says Longo: "She's a good person and she tries really hard to keep her integrity intact. There are always going to be naysayers, and people trying to tear you down. That's something we've both accepted."

But, Longo adds, "does she talk to the dead? She sure as hell does."

1:39
Conan O'Brien, an unlikely Theodore Roosevelt fan
1:39
Who knew? Conan O'Brien is a huge Theodore Roosevelt fan
No apology: Tavis Smiley makes comeback bid after PBS firing
Amy Schumer TV show films at Island Park restaurant
'Kevin Can [Expletive] Himself': Watchable, engaging oddball
1:22
'Kung Fu's' Eddie Liu on how he got his start
Didn’t find what you were looking for?