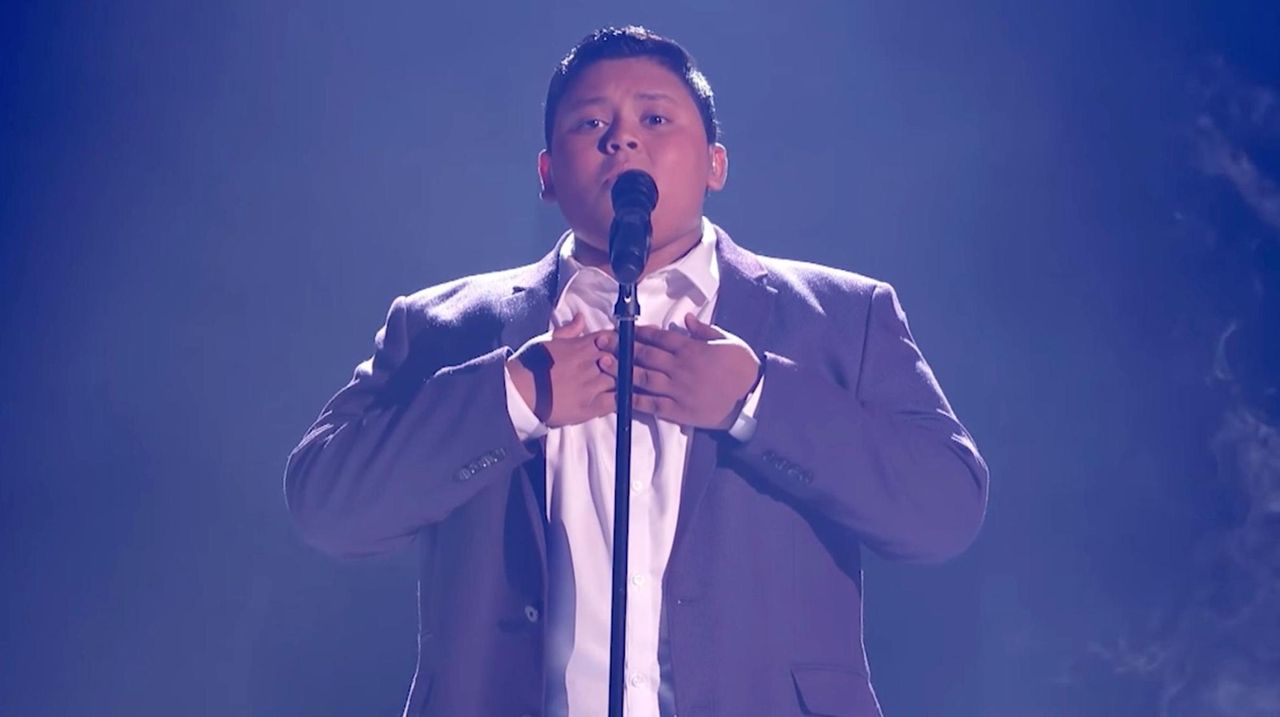 Luke Islam, a 12-year-old from Garden City South, gave a powerful performance of "You Will Be Found" from "Dear Evan Hansen" on the Aug. 13 live edition of "America's Got Talent." Credit: “America’s Got Talent”

The young musical theater aficionado received enough audience votes on the "America's Got Talent" live results show to move on to the reality competition's semifinals. Those live shows will showcase performances on Sept. 3 and 10 with result shows on Sept. 4 and 11.

The singer, who told "AGT" host Terry Crews that he felt proud to have made it to this point in the competition, learned he advanced at the same time at Canadian girls group GFORCE would be leaving the show.

Judge Julianne Hough, who awarded Islam the Golden Buzzer on a July episode, echoed the young performer's sentiment: "I think proud is the perfect word. I see a long, long career ahead of you, so keep going."

A day earlier, Islam had impressed the judges and received a standing ovation from the audience,  prompting even notoriously perfectionist judge Simon Cowell, a music producer, to compliment "that confidence and that poise and that control."

On Tuesday's live quarterfinal round at the Dolby Theatre in Hollywood, the youngster came on about 90 minutes into the show and crooned "You Will Be Found" from the Tony Award-winning Best Musical "Dear Evan Hansen."

"Luke, you did not disappoint with that Golden Buzzer, because what you just did right now just proved what an incredible voice [you have], what an incredible performer you are," Hough told him, adding, "That voice is undeniable. I am so proud that you were my Golden Buzzer." She tweeted afterward, "Still watching @TheLukeIslam SLAY this song from @DearEvanHansen. #AGT."

"I predict you're going to be on a Broadway stage [someday]. You're going to be starring," gushed judge Howie Mandel. Judge Gabrielle Union excitedly said, "You're a world-class talent, Luke, and I think the whole world just fell in love with you again and again and again," and she called his performance "truly, truly amazing."

An overwhelmed Islam told host Terry Crews, "So many new opportunities have opened to me. I am so grateful and thankful and I can't believe that I'm here right now." Islam later tweeted, "So happy right now! Feel like I'm buzzing! #GoldenBuzzer THANK YOU so much being with be me on this #AGT journey!"

In his taped introduction, shot in Times Square, Islam — the first person seen onscreen in the episode's opening montage of contestants — had explained that, "For some kids, going to Disneyland is their favorite thing, but for me it's going to a Broadway show. Walking down Broadway you see the billboards, the lights, the marquees and it’s just so magical. I was only 6 when I saw my first Broadway show. That moment changed my life forever. Seeing the actors and hearing all the music, after that I knew I wanted to be on that stage.”

On the episode recorded March 4 that aired July 9, the H. Frank Carey High School student had belted out "She Used to Be Mine" from the Tony Award-nominated Broadway musical "Waitress.” That show’s composer, Sara Bareilles, tweeted him her admiration in response.

The live results show airing Wednesday night will determine whether Islam moves on to the next round.