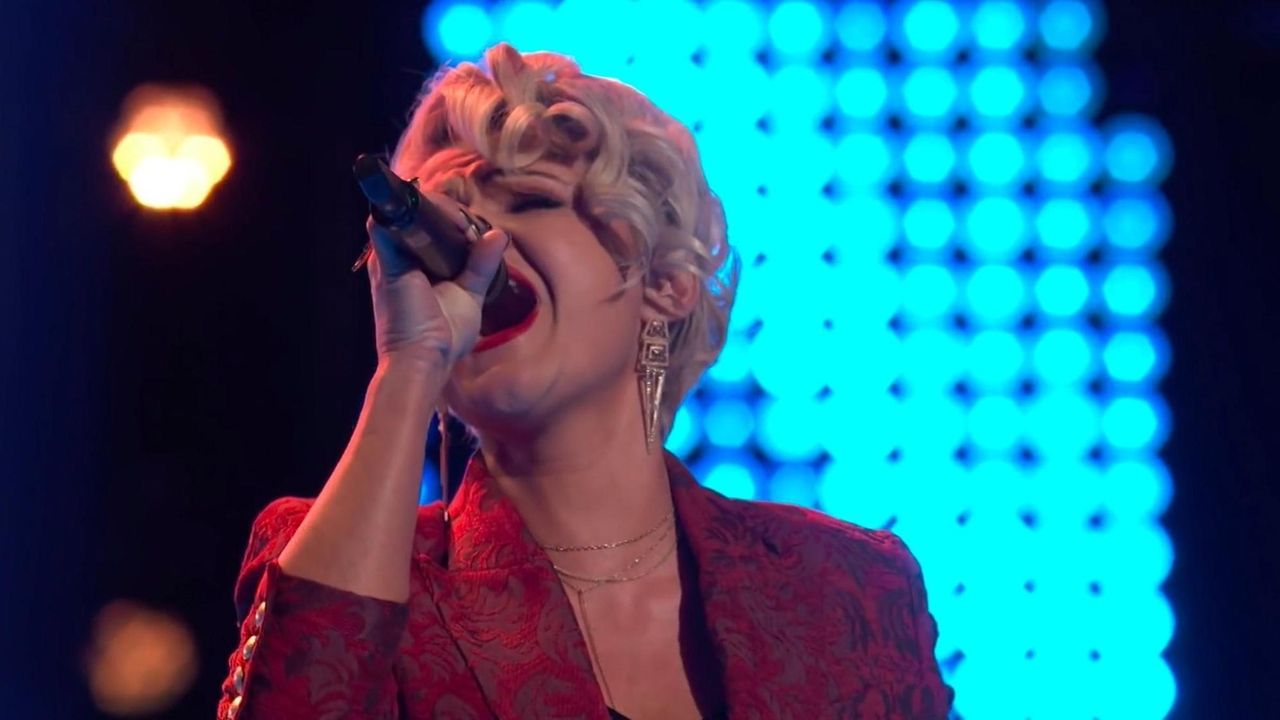 Marina Chello of Plainview performed "I (Who Have Nothing)" during the Knockout Round of the Oct. 28 edition of NBC's "The Voice." Credit: 'The Voice'

Plainview's Marina Chello delivered a knockout performance in the first Knockout Round on NBC's "The Voice" Monday night, eliciting audience cheers and a standing ovation from the judges — yet she was eliminated in what her team coach Blake Shelton called a "horrifying" decision to make.

Competing against Nashville singer-songwriter Cali Wilson, who performed Chris Isaak's "Wicked Game," the 37-year-old Chello delivered a powerful version of Tom Jones' 1970 hit "I (Who Have Nothing)." Coach Kelly Clarkson stood up and applauded mid-song, and the audience broke into cheers at multiple points when Chello hit a hard, high note, belted out an emotional passage or did a trilling vibrato.

Coach John Legend told Chello she was "fully in control, and when you hit those high notes, it was just astounding." Coach Gwen Stefani, calling both singers "stunning," said of Chello, "It was just exciting to watch this cute little doll have that much power come out." Clarkson told her, "Marina, there is such an intensity about you and a vulnerable kind of vibe … You really can't teach your gift."

Faced with the choice of eliminating one of his two team members, Shelton mused, "You know, this is what you hope for, I guess, as a coach. But when it comes down to this moment, this is horrifying, because both of you two deserve not only to be on the show but to be on the damn radio, honestly. … Marina, you have been incredible since the beginning."

Nonetheless, he said, "I think Marina did what we all knew she could do. I think Cali did what none of us thought she could do. And I had to reward her for that."

Chello, her voice breaking, told Shelton, "I am so thrilled to have had this experience. It's a huge honor. Thank you so much for everything. Thank you."

"Thank you for all the enormous amount of support I've received," Chello, wrote in a long Instagram post Tuesday morning, marveling that she had gone "further than I ever imagined" she would when auditioning. Thanking the show's musicians, production crew and judges, she said, "To get advice and be mentored by @taylorswift and @dariusrucker is a once in lifetime rewarding guidance. I got to work with @blakeshelton whom I will forever be a huge fan of, he's so humble and funny and very in touch with his artistry."

The wife, mother and catering-hall manager, who performs regularly in the area, went to say, "I got so many messages saying how Ive inspired someone to follow their dream … I'm very proud of the opportunity to tell my story … as well as showing my son to never stop going after your dreams,"

She concluded by saying of her fellow "Voice" singers, "I made friendships to last a lifetime! wish all my super talented, gifted friends a fulfilling journey and to never stop singing because every one of you are true masters of your art. Good luck guys I [heart emoji] u!!!!"