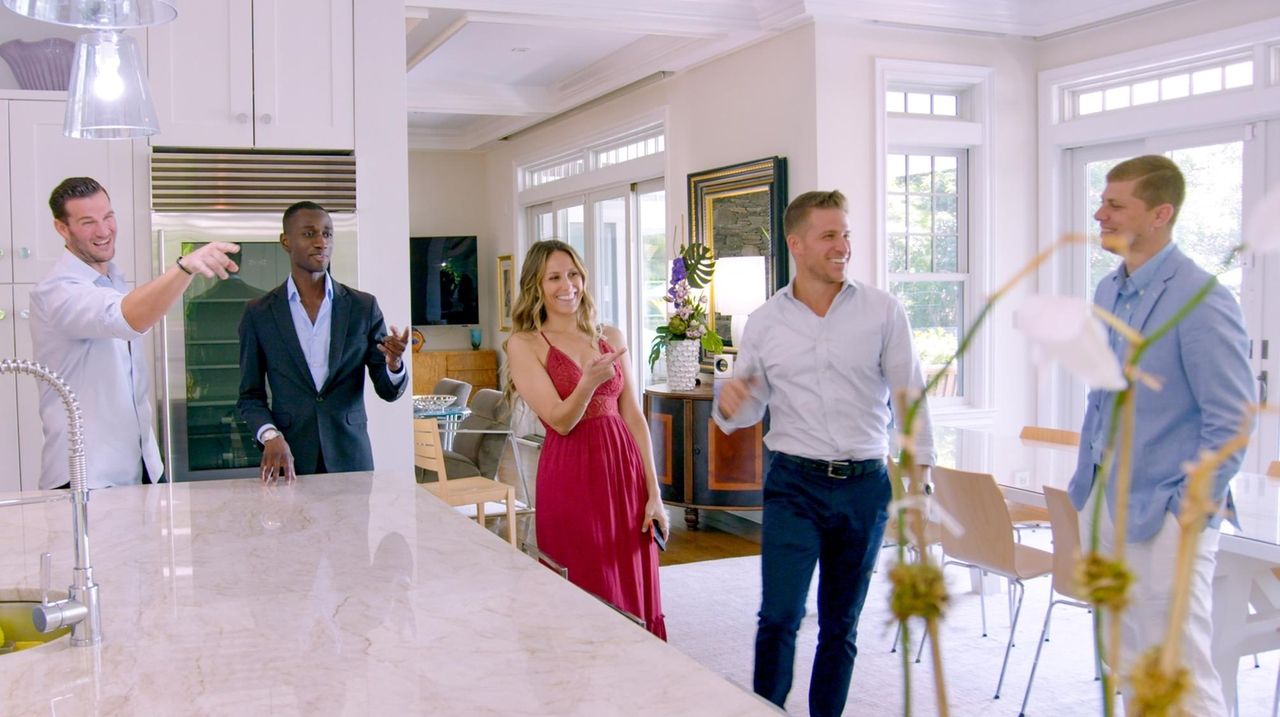 Patti's eyes narrowed to a slit as she surveyed her freshly "staged" home, with a sixsomethingmillion asking price. She looked past that artful temporary décor, past that "bonus" third story view which looked out over that bonus heated Gunite saltwater pool and Roman spa, then past that fabulous view of Sag Harbor Cove, past the sailboats and azure ocean, even past (albeit perhaps fleetingly) that potentially huge pile of money.

"I'm not digging it," says Patti — we never do learn her last name — of the staging, then further elaborates with, "Holy [expletive]. I [expletive] hate it."

Cue to broker Michael Fulfree, a Nesconset native and one of the stars of Netflix's "Million Dollar Beach House," which dropped Wednesday — and yup, the guy who did the fateful staging. Words fail him momentarily but his skin does appear to mottle ever so slightly. Michael clearly is not looking past that potentially huge pile of money.

This scene in an early episode happened last summer when "Beach House" was taped, but it may as well have happened yesterday. The Hamptons real estate market remains hot — hotter, in fact, up 27% alone this past spring in median sales prices, although the so-called "Patti Shack" can still be yours for $6 million. The world has changed over the past year — and how — but don't tell the Hamptons or "Million Dollar Beach House."

"Obviously nobody expected the world to be what it is now," says executive producer (and Manhasset native) Tony DiSanto, "but what I've found is that sometimes you're surprised about what works during a specific period of time."

And what works on TV, notably the unscripted real estate genre, which continues to boom. The third season of the Netflix hit "Selling Sunset" dropped August 7. Bravo's long-running "Million Dollar Listing" remains a subgenre unto itself but there's also "Flip or Flop" (Hulu) and "Sell This House!" (A&E) and "Love It or List It" (HGTV) and "The Vanilla Ice Project" (DIY), to name a few. Viewers want this stuff even if some can't meet their own monthly mortgage nut. Surprising, or maybe just counterintuitive?

"People are locked in their apartments and want to escape and there is escapism in this," says DiSanto. "It might be totally out of step with the world but people want to break out, if only in their minds, and that's what these kinds of shows can do."

Like "Sunset," "Beach House" is a hybrid, designed to sell as much as entertain, and what's being sold here is Southampton-based real estate giant Nest Seekers International, which recently launched its own TV program division of which this is the progeny. ("Million Dollar Listing New York's" Ryan Serhant, arguably the best-known personality in the genre, is one of Nest Seeker's 1,500 employees.)

Nevertheless, "entertain" is the tricky part, and that's where DiSanto comes in. He changed TV and the culture in the mid-aughts as MTV programming chief with shows like "The Hills," "Laguna Beach," "Run's House" and — before leaving to start his own production company, DIGA Studios — "Jersey Shore."

"I always liked to get shows that take you inside an interesting world or subculture," he says, but especially those that "were relatable and aspirational. That's what worked best with [a show like] 'Laguna Beach.' You get past the amazing setting [and] realize that everyone is going through something you, the viewer, can relate to."

Eddie Shapiro, the chief executive of Nest Seekers, said in a recent phone interview that he launched the program division because "first and foremost there's this perception that real estate agents put a sign up on your property and we find buyers, but we represent big development projects and very expensive homes [and] there's a lot more that goes into it than you would think.

"The other thing that's happened with media and TV programming in general," he adds, "is that people want to know how things are made."

What gets made in "Million Dollar Beach House" are deals, or at least the schmooze that goes into making them. Along with Fulfree — a former high school football defensive player, and model, whose wife was expecting during taping last summer — the other cast members are Commack native Peggy Zabakolas, a veteran broker who has recently joined the Hamptons office; Noel Roberts, a newbie (and the sole African American of the group) who likes to "push buttons," most notably Peggy's in the first season; Jimmy Giugliano, Nest Seeker's veteran and wise elder of the office who usually appears off-camera to explain real estate arcana or the quirks of his fellow brokers; and JB Andreassi, a Dartmouth football standout and Water Mill native who has returned home after a brokerage career in Manhattan to work with Michael, his close friend since high school (St. Anthony's of South Huntington).

"Million" follows them as they learn the ropes, or rather the properties — nice ones, like 6 Olde Towne Lane, Southampton (asking $40 million) or 21 Kellis Way, Bridgehampton ($6.99 million.) A beach-front mansion on Marine Boulevard in Amagansett plays a key role in the early episodes after Noel decides to list it at $35 million — about $10 million too much, per his arch nemesis Peggy, who bristles at his arrogance while he in turn bristles at her pushiness.

They're all impeccably dressed, telegenic and ready for their Netflix close-up, but at least in the early episodes, the camera seems to seek out Andreassi, 30, a bit more than the others.

In a telephone interview, he said Shapiro called him into an impromptu meeting at a Starbucks in early 2019, where his new boss informed him that "'I guess you heard … we're thinking about you for the show.'

Shapiro said back then "there were a number of [employees] under consideration" to join the cast "but sometimes those that you think are going to be comfortable on camera don't work out so well."

While this wasn't a problem for these core five, Andreassi admits this "is all so new to me and I went through this five-minute stretch when I had the blanket up over my head" when he watched for the first time Wednesday.

But "they did it right."

And yes, he and Shapiro are hoping for a second season and promise they have more than enough material if they get one. "Overall, wealthy people are as wealthy as they've ever been and they continue to get wealthier and wealthier," says Shapiro. "They often move and act on impulse, and if they feel it's time, and want to go after [a house] they will."

"The Hamptons [is] definitely on steroids. You couldn't ask for better times."

What happens over this first season of "Million Dollar Beach House?" Here's your handy guide:

Episode 1: The brokers — Noel, Peggy, Jimmy, JB and Michael — are introduced, and so are the office politics. There's instant friction between Noel and Peggy because she thinks he's asking way too much for a new listing (and is). Plus, he hardly knows a thing about said listing — obvious when he botches a pitch to a potential buyer.

Episode 2: Ah, we meet Patti again! (And no, we still don't know her last name.) We also meet Noel's twin brother, who arrives from their hometown in Minnesota.

Episode 3: It's getting hot, and we're not talking the Hamptons "weather" or "market." Peggy berates Noel at his own luxe birthday bash, and he berates right back. Spoiler alert: Patti is starting to like the infamous staging.

Episode 4: Now poor Michael is getting embroiled in the Peggy/Noel feud, although he plays the role of peacekeeper — if only to make certain they don't derail a lucrative hotel deal the "Nest Seekers" have been working on.

Episode 5: Peggy's landed a big new listing in Wainscott, to which Michael brings a client — just to make her feel like one of the guys. Meanwhile, JB — who's managed to stay above the fray — is getting restless. He wants his own listing, but Jimmy won't give him one.

Episode 6: Jimmy lands the biggest fish of the summer — a $40 million fish, to be exact, on Olde Towne Lane in Southampton — and nearly loses it to Peggy while juggling calls at the "viewing," or open house, party. Peggy later works some back channels to the owner. She wants that $40 million fish and no one's getting in her way.