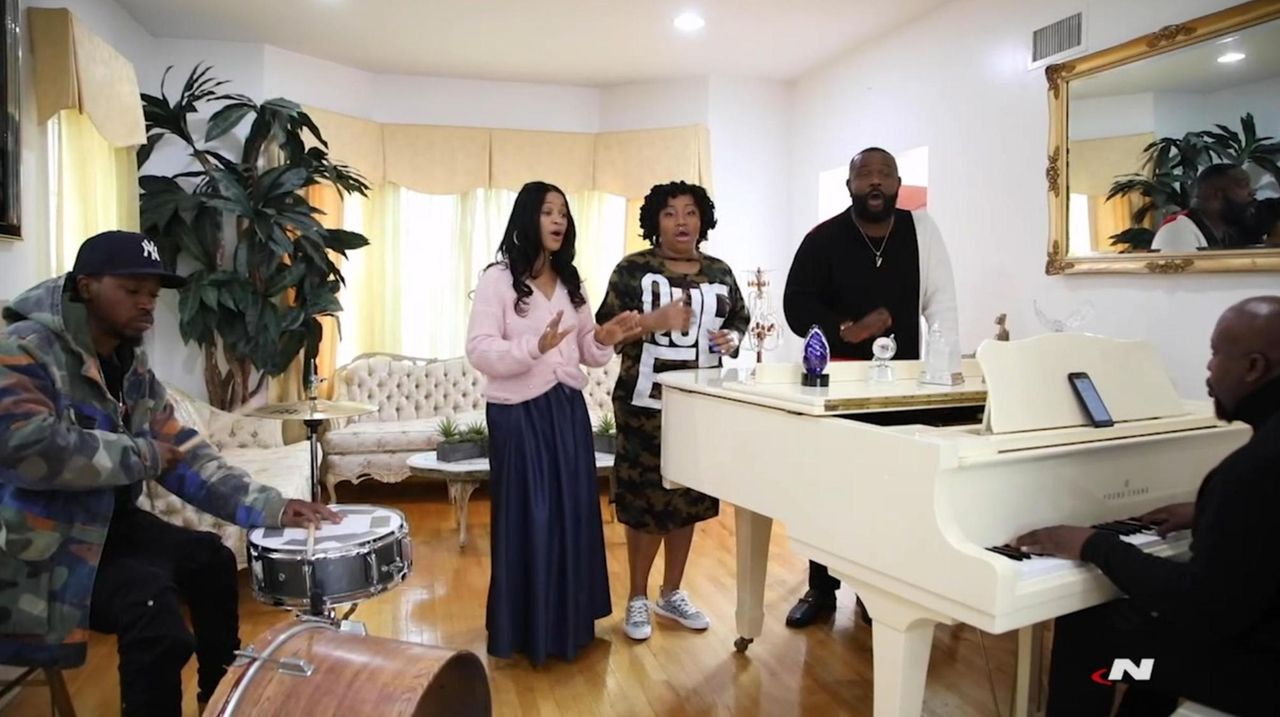 Valley Stream resident Richard Hartley, pastor of the Haven International Ministries in Far Rockaway, will be appearing with his musical family on "The Rev," a television series on the USA Network. Credit: Barry Sloan

The Rev has lived in Valley Stream the last 15-or-so years but at the moment he is in Miami, traveling, as usual. Before the pandemic, he was almost always on the road — a long, winding one, that took him to Germany, Italy, Yugoslavia, Australia, China, Turkey, Russia, Ghana, Senegal, Greece and Austria.

The list of stops, and gigs, went on and on, but all of them ended up in Japan. The Rev is big in Japan, so big that he can pack concert venues in places like Tokyo Disneyland.

Hartley, 59, is one of the world's leading gospel choir directors, but stateside, in the Age of COVID, his renown has largely been confined to just two places. At the old Classic Revival building on Beach 84th Street in Rockaway Beach, the former Temple of Israel Synagogue — now Haven Ministries — he is pastor and musical director but also singer, arranger and choir songwriter.

In a few days, this dad, pastor, husband, choirmaster and self-described chef will star in his own show. You've probably already guessed its name.

"The Rev'' (debuting Thursday, Jan. 21 at 10:30 p.m. on USA), is both familiar and unusual. It's an unscripted family comedy series except that this family is Black and nonsecular, deeply so. Hartley says that Jesus will star, too, at least in spirit, although it may be worth noting — as I did — that USA is also TV home of "Straight Up Steve Austin" and "American Ninja Warrior: Ninja vs Ninja."

No problem, says The Rev, laughing. "If Jesus was here, that's where he would go [too]."

He laughs a lot, but you also suspect he's serious about this. "Jesus would go to the street [or] where there was no representation. This is a slice-of-life show about an African-American family that's faith-based. USA hasn't had that type of representation before, so I'm really honored to be a part of it."

"The Rev'' was supposed to be a family comedy with a lot of musical elements, but COVID restrictions quickly took care of that. Filming on the first eight episodes ended almost as soon as it had begun in March (filming resumed in August). Thursday's opener has a couple of jokey scenes of The Rev trying to lead members of the Haven choir, each masked.

The results are predictable: Masks and choirs do not mix.

That's a shame because a lot of music has come out of this remarkable career. Hartley has led choirs on two Mariah Carey videos — "Anytime You Need a Friend," "Hark, the Herald Angels Sing" — and led another in the 1999 TV movie, "Double Platinum," starring Diana Ross and Brandy. He has appeared on a handful of talk shows (including "Late Night with David Letterman") and award shows (the Grammys). He's an in-demand choirmaster who has worked with half-a-dozen churches across New York City and Long Island.

But overseas is where the real action is. The gospel legend Queen Esther Marrow — who until recently lived in Amityville — once told the Washington Post that she could scarcely draw a crowd in the States, but "people in these little towns in Germany, Switzerland and France embraced us like we were rock stars." (Marrow, by the way, had once toured with Duke Ellington.) Likewise, Hartley has played hundreds of concerts overseas.

While "The Rev" may be unusual for TV in general, USA in particular, its star unquestionably is.

Born in Queens, raised in the Hammel Houses in Far Rockaway, before moving to nearby Arverne, Hartley's early family life revolved around the church, specifically the Bethlehem Church of God in Christ.

About 30 years ago, his mother, Naomi — at the time a cosmetologist — started a prayer group in their home, which eventually became Haven Ministries. The Hartleys had left Bethlehem because they had been asked to. Music was the stated reason.

At the time, Hartley and his older brother, Stuart, had been starring in the off-Broadway musical, "Mama, I Want to Sing!" The church forbade any sort of secular music performances.

"It decided we had been venturing out into what it called 'worldly situations' so we took our forty-acres-and-a-mule, so to speak, and created something that would be more inviting to anyone, hence the name 'haven,'" he says. "It's still a place where anybody can come. Race, creed, color, doesn't matter."

Leaving Bethlehem, nonetheless, was a huge blow because he had effectively begun his career there, he recalls.

When he was barely six, he had seen someone direct a choir "and I was mesmerized by that. I saw my future."

Then, one day not long after, back at choir rehearsal, a supervisor said he wanted one of the kids to direct and the 6-year-old kid with big plans raised his hand. Hartley has been conducting choirs ever since.

In fact, there was a certain cosmic significance to his appearing in "Mama, I Want to Sing!" — then playing at old Heckscher Theatre on Fifth Avenue in Harlem (now Teatro Heckscher) and which remains to this day the longest-running Black musical in Off-Broadway history. "Mama" was based on the life of R&B singer/songwriter, Doris Troy, who had also been forced out of her Pentecostal church for similar reasons. (Troy, who died in 2006, co-wrote and sang the 1963 hit "Just One Look.")

Vy Higginsen, Troy's younger sister, also creator of "Mama" which she has since turned into a worldwide franchise, said in a phone interview that the Hartley brothers' story "is the story of African American music. Most of our training came out of the church, and then the music was transferred to the outside — to Apollo, to radio. It's Aretha Franklin's story, Roberta Flack's, my sister's too. But back in the '50s and '60s, you couldn't sing secular music. It was considered the 'devil's music.'"

The Hartley brothers, who remained with the show over its entire 11-year-run at the Heckscher, "could really sing, [and] they were a good time," she recalls. But they were also different in temperament. Stuart, who worked as a phlebotomist by day (he died of kidney disease in 1992) was the serious one.

But Richard — his day job was in the New York City School system, as a guidance counselor — "was funny."

Hartley had been cast as both the Reverend and choir director in "Mama" and played both so effectively that she later got him a job as a choirmaster at her sister's church in the Bronx. Hartley continued to tour with "Mama" on overseas engagements, mostly to Japan where it had become a hit.

Higginsen says his Japanese fan base grew from there.

Hartley says "Mama" was his big break "because it's this legendary musical [but] I was also living the [story]. We packed the theater every night and all the big stars came — Diana Ross showed up, Janet Jackson, Eddie Murphy — and it was just this incredible experience in Black culture and life, and still is but made a wider cultural impact too."

Traveling the world, "the audiences that came weren't just Black but all types of people. They responded to the music, which was just riveting, but also the story."

The Rev presumes no such expectations for "The Rev" but he does see a little cosmic significance in this new TV series as well.

Production was on hiatus when George Floyd was killed in May "and I'm glad we were because we weren't in any emotional position to play funny with anything," he says. "It was rough for me because I have experienced that — that feeling of nervousness just walking around. I've raised a family, and have a mortgage but when I'm on the street, I'm just a Black man. I've been driving a Mercedes-Benz for thirty years that I paid for, but I constantly get stopped [by police who ask] 'is this your car?' I get that sort of nonsense all the time."

He says "The Rev'' is "about a father interacting with his daughter, son and wife — these stay-at-home millennials eating up all the food — but it is relatable and indirectly can show [viewers] that we are people just like everyone. Hopefully it can disarm people of their prejudices and their fear — because prejudice is rooted in fear.

"We have to learn to accept people and to embrace" — The Rev then pauses, laughs — "and to know me is to love me."

So, what then is "The Rev'' about? Obviously, The Rev, but Richard Hartley also has a family, and this show is really about the dynamics of family life in their sprawling Valley Stream home. Some of this dynamic will be familiar to viewers, some less so.

Stacey — a nurse, now first lady of the church, who runs a prayer line and has a crochet side-business — explains that her husband is "hilarious and for years, you know, I used to say to him, 'honey, you need your own show,' and his aunt used to say, 'Richard, you need your own show.' It's always this big, funny reality thing going on in our family, so when the opportunity presented itself for us to display who we are, I was surprised but not really shocked."

Taping began in January, then stopped not long after, picking up again late summer. The Rev's work as a choir director was, of course, put on hold, so that meant a greater focus on family life, especially his interactions with his adult kids, Judea, 27, and Jordan, 28.

To wit: He keeps reminding them, gently, that it's time to move out; they push back. (Moving during a pandemic isn't exactly easy for anyone, so how that will be handled in later episodes is unknown.)

Judea — a Hofstra graduate in journalism ("I want to be a storyteller") — explains the dynamic in these early episodes this way: "Daddy wants us out. That's pretty much it."

She elaborates, "Daddy wants to throw us out but mommy wouldn't mind if we stayed for the next five years. She [does] baby us."

Here's another complicating factor: Both Judea and Jordan are tightly bound to Haven Ministries in various ways, while Jordan, a musician, has played drums in the choir band since he was a child, or per Stacey, "ever since he was nine years old."

Jordan traveled the globe with dad, playing professionally, while bookings — most notably to Japan — were worked around school schedules.

Will "The Rev" get into church life? Maybe, maybe not, but it is the single most important factor in this unusual family's life. As Stacey explains, "I was embracing of [the show] because I knew this was an act of God and something that God had planned out for my husband." — VERNE GAY