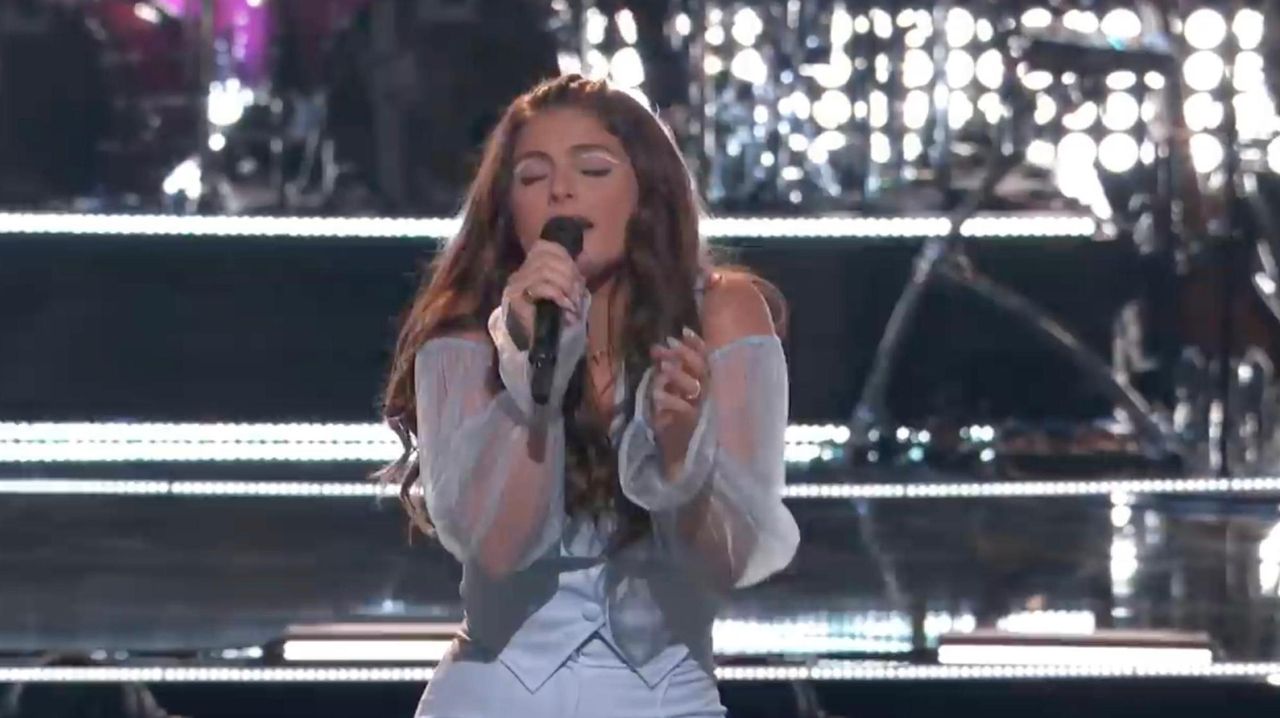 LI's Bella DeNapoli battles Katie Rae on "The Voice" in the first of this season's Battle Rounds.  Credit: The Voice

Calling her "a stunningly gifted and consistent vocalist," coach Ariana Grande on NBC’s "The Voice" Monday night saved 21-year-old Bella DeNapoli of West Islip after choosing her opponent, Katie Rae Mortimer, as winner of their Battle Round duet.

"This was a really painstaking and tough decision. I think it was just a matter of emotion," Grande said on air, after becoming tearful trying to decide between the two, who had given what fellow coach John Legend called a "powerhouse" version of the hard-driving 1979 Barbra Streisand-Donna Summer dance number "No More Tears (Enough Is Enough)."

After Grande's choice of Rocklin, California, stay-at-home mom Mortimer, DeNapoli gratefully told the pop star, "Ariana, I never in a million years would have thought that I would even be able to sing in front of you, and now you're crying over me! That's crazy!"

Then as host Carson Daly was about to usher DeNapoli off the stage, Grande hit the "save" button, keeping the Long Islander on the artist's 11-person team that eventually will be winnowed to four for the finals.

Before Grande's decision, Legend had praised DeNapoli's singing. "Bella, there was a word you said [in the song lyrics], I think it was 'my,' and the way the vibrato rang … I was, like, 'Oh, my God, you're crying!' Just the way you said the word…." Nonetheless, he said he felt Mortimer had the edge.

Coach Kelly Clarkson marveled, "Bella, you started and I was, like, 'What?!’ … You bring all these, like, piercing, kind of more pure notes happening upstairs" in high vocal registers.

"In the penthouse!" Legend quipped.

Coach Blake Shelton told DeNapoli, "When you started the song, it was almost like a scene from some old classic movie." Then after complimenting Mortimer, he said, "I'm leaning towards Bella."

On Instagram Stories, where posts cycle out after 24 hours, Grande wrote, "[C]rying. yep…….had to do it. love you @belladenapoli. you were and continue to be just so stunning."

The West Islip High School graduate is the daughter of local cover-band singer Nanci-jean DeNapoli and guitarist Tom DeNapoli, who make up the duo Fine Wine and front the six-piece Beernutz. They also own and run the large electrical contracting firm KND in Deer Park.

Another Long Island singer this season, Kaitlyn Velez, also 21, formerly of Ronkonkoma and now of Copiague, had made it onto Shelton's team. She will perform in an upcoming Battle Round show.