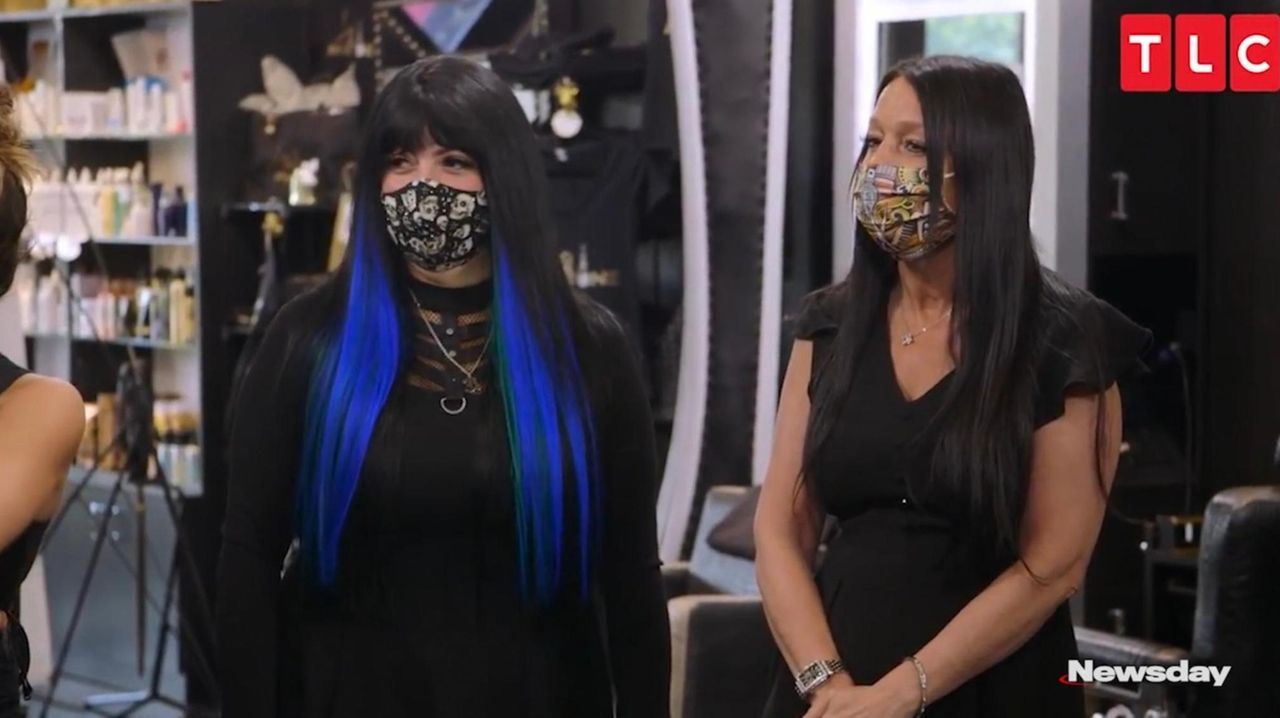 Sisters Lexi and Bria Martone, of TLC's Long Island reality-TV series "Unpolished," have the same cross-talking banter in life as they have on their show about a flamboyant Italian family in Dix Hills that runs a beauty salon in East Northport.

"Your phone is not staying up," nail artist Lexi, 28, tells hair and makeup specialist Bria, 24, as they try to prop up a cellphone for a Zoom interview taking place in a backroom of Salon Martone.

"What do you want from me?!" replies an exasperated Bria.

"You want to put a towel under it, so that way it doesn't slide!" instructs Lexi. "Why did you get that chair" on which the phone rests, she asks.

It feels like being on the show, or at least watching it.

"Clearly!" agrees Lexi. "Everybody says that we're scripted. We are not!" she says with a laugh.

"Unpolished," which airs Tuesdays and began its second season last week, follows the two sisters, their mom Jennifer Martone, 56, and their extended family, including Bria's now-husband, Matthew Mancuso. The season opener revealed that patriarch "Big Mike" Martone from season 1 had died of cancer. Bria's godfather, her maternal uncle Joe Varuzzi, walked her down the aisle for her September wedding at Huntington's Oheka Castle. For unclear reasons, TLC and the show itself give the family surname erroneously as "Varozzi." A network representative did not comment on the discrepancy.

This first year after Mike Martone's death on May 9 has marked "the first for everything, especially Christmas," without him, Bria says. "It's definitely an adjustment. But we have each other and I think that's what helps us get through it."

Mike's plumbing business, Raytone in Maspeth, Queens, has continued on with "our uncles," says Lexi. "It's kind of a big family business, so they're stepping in and taking the reins on that."

A running thread on the show is Lexi's antipathy toward her brother-in-law, who among other issues for her has gone through rehab for drug abuse. He also fathered twin sons, Ronin and Logan, with another woman during what Bria has called a two-year break.

"He was older," Bria allows. "But, yeah. We met in the gym and the rest is history."

To this day, Lexi insists she still will merely "tolerate his existence on planet Earth. … I still don't make eye contact. If he says something, I will make a comment towards the room."

"He can keep trying," says Lexi. "Whatever he wants to believe."

One hallmark of the show is the ladies' wild outfits, including mom Jennifer's cheetah-print catsuit. Do they — particularly the highly made-up, décolletage-baring Bria — feel they're perpetuating a stereotype of Long Island women?

"I don't fit any stereotypes," says Lexi, who was born in Queens and as a child moved with her parents to Long Island, where Bria was born. The family lived in East Meadow until the girls were in the sixth and third grades, respectively, then relocated to Dix Hills. "I don't beat to my own drum — I think I'm a different instrument!"

"I don't really know what this whole Long Island stereotype is," Lexi cuts in, "because I think there's plenty of different stereotypes for Long Island women. … I don't know where everybody gets this 'typical Long Island woman' stereotype… . I just know I don't fit any stereotypes. I'm just weird. And I like it."

Besides, she adds with a chuckle, "Everyone thinks we're from Jersey."