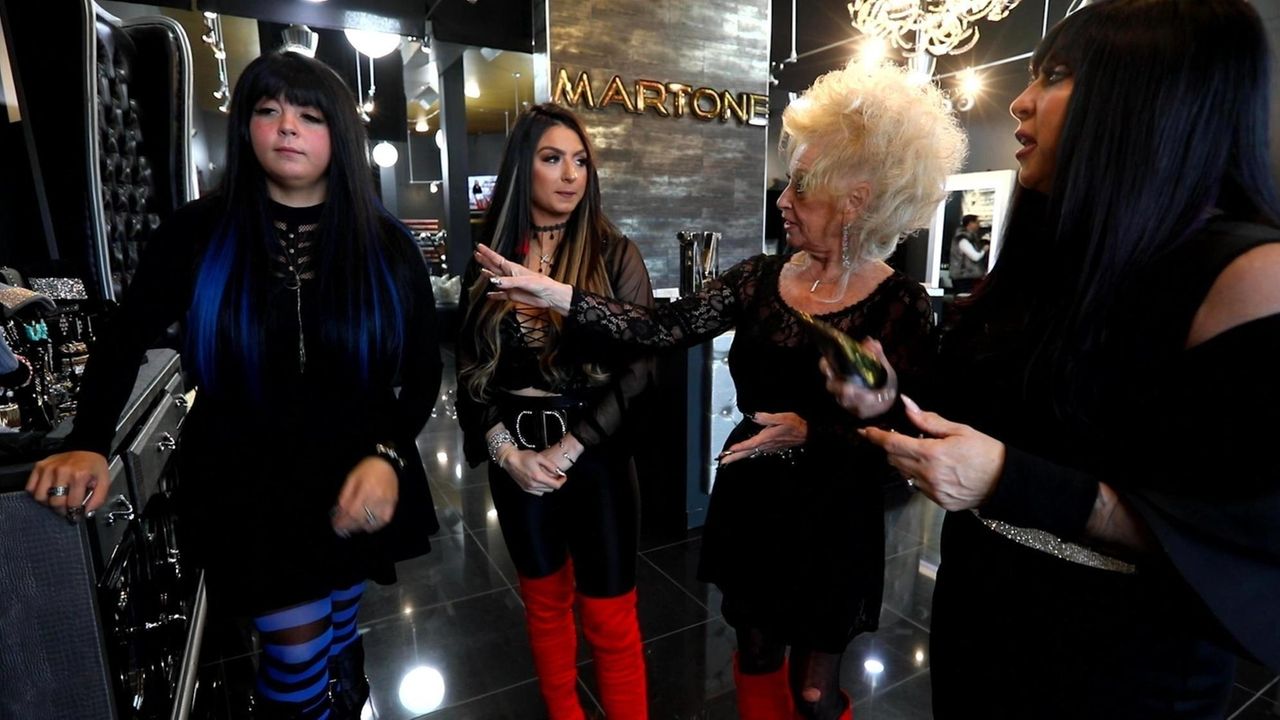 Salon Martone, a full-service salon in East Northport owned by the Martone sisters, Lexi and Bria, will be the focus of "Unpolished," a new six-part reality series on TLC, the network announced Monday. Credit: Linda Rosier

Finding a specific salon in this suburban sea is like finding Nemo. Salons are everywhere, and indistinguishable from any other boutique, deli, outlet or grocery storefront scattered along a short stretch of Jericho Turnpike in East Northport. There's Blow Me Away Blow Dry Bar and Victoria's Nails and Cozy Nails and Salon Notre.

Finally, nestled in a small plaza, adjoining a TCBY and Bagel Boss, is Salon Martone, the setting of TLC's new reality series "Unpolished." There's not much to see on the outside. Appearances are deceiving:

Once inside, you're immediately enveloped in blacks and golds — Lexi Martone later describes the ambience as "blingy-mysterious" — and then in tumult. A clamorous discussion is in progress. Foxy Martone, the family matriarch with a diminutive frame, and towering white updo, stands stoically off to the side, while her daughter, Jennifer, 55, choreographs a group portrait for a newspaper photographer. But someone's missing — that'd be her daughter, Lexi, 26 — who just then arrives, and is late because "a FedEx truck blocked the driveway." Her kid sister, Bria, 23, then joins the gathering storm. Like her grandmother Foxy, she's wearing thigh-high red boots with five-inch heels.

It's as if their new unscripted series has just begun. More likely, it has never really ended.

Launching Sunday at 10 p.m., the six-episode "Unpolished" is part of that venerable subgenre of reality TV known as the salon makeover series — think  "Boss Nails" or "L.A. Hair" — but there are key differences here besides the Long Island setting. It's quickly self-evident what those are.

"What I told the girls is that I would love for this show to be successful because of who they are," says Jennifer, who runs the front desk as well as a kids' party space that's behind the salon. "I don't want it to define them or get them a swollen head because they're on TV, but make certain they know they got this show because of the talent they have. There are perils that come with it, sure, but they're all good. They won't get a chip on their shoulders. Being a little famous is fun and we've been having some fun, but you still have to remain who you are."

"Unpolished," which shot all six episodes over the past year, will pivot between the salon and the family home in Dix Hills, where viewers will get to meet the guys, too — Lexi's boyfriend, Joe Fraumeni; her father, Mike “Big Mike” Martone; and Bria's boyfriend, Matt Mancuso — usually over the mandatory Sunday dinner. But the ladies, and in particular Lexi — who already has a national following on Instagram for her nail art — will fill the screen. They almost can't help themselves.

"Long Island is the gift that keeps on giving [and] we've been lucky in finding families like this," says Wendy Douglas, TLC's vice president of production who developed "Unpolished" and grew up in Baldwin and Freeport.

Douglas says that like TLC's "Long Island Medium," which is as much about the family as the "medium," "Unpolished" will be family-centric too, with detours into the exotic world of "balayage" (a technique to highlight hair) and "3-D nails." The Martones are "real New Yorkers and tell it like it is. They're fun, authentic, real." Douglas says that when she saw the early footage, "I fell in love with them right away."

In person, the Martones do tend to leave a singular impression. Spend any time around them and you become them: Louder, faster, brassier, nearly conversant in the world of salons, where customers bare their souls — another key element of the series — or lay out $175 for a three-hour session with Lexi. After a few hours, you're almost ready to open up your own nail salon. Hey, what's one more in this neighborhood anyway?

Large personalties each, they are clearly the show and the show is them. Lexi is the bemused observer, the self-described "voice of reason"; Bria is the high-octane stylist and Lexi's mirror opposite ("we're the same, but different"); meanwhile, Jennifer runs the store and to the extent that she can, her daughters' lives.

Then there is "Foxy Grandma." The nickname was someone's off-handed suggestion on Instagram a few years ago and it stuck. Her real name is Eleanor Varuzzi, and she grew up in Middle Village, Queens. In the '60s and '70s, she would take her two children on a bus to Brooklyn each day, going door to door where she'd do hair for $3 a customer. Styling was in the family DNA.

When the Martones moved to Dix Hills 20 years ago, Lexi started to "dabble" in art. "Fashion was not what I wanted to do," she says. "I liked to paint on small canvasses — teeny, tiny paintings — and my art teacher would say, 'you need to paint on five-foot canvasses.' I thought just because it's larger doesn't make it any better." Lexi would soon be working on the smallest canvas imaginable.

After high school and a brief stint at Fashion Institute of Technology, she discovered that nail art was more than a "thing," but a living. A good one. Bria, who had thought of becoming a dancer, instead trained as prosthetics artist then segued to hair. The sisters opened their own salon in the family home. When the business got crowded, Big Mike — who runs a plumbing business in Queens — suggested they open up their own store. Salon Martone launched four years ago.

In the interim, Lexi built that national following. Her nail designs were wild, exotic, extravagant, even animated. She could do spinning pizzas on nails, or ones with tiny volcanoes billowing smoke. Whatever a customer dreamed up — however bizarre or ornate — she would comply. Those customers, some from as far away as Texas, began lining up.

A couple of years ago on a whim, she applied to be a contestant on the Food Network competition series, "Bakers vs. Fakers." ("I was a faker," she explains.) That brought her to the attention of "Unpolished's" production company, Cakehouse.

"They said, 'you want a show?' and I said" — she pauses here for effect, to indicate that she didn't exactly give the prospect long, deep thought — "Yeah."

Lexi acknowledges the irony in her choice. "I don't watch TV at all, unless it's baseball" — she's a huge Mets fan — "or Gordon Ramsay."

So why do this? Again, she pauses, as if the question is almost too ridiculous to consider:

"Because other people watch TV."

There are risks. None of the Martones have seen a minute of footage, and they do understand that TV producers have a way of taking something — an innocent, stray comment, for example — and twisting it into something that was unintended. That's called "shaping" the series, and for outsized personalities like the Martones, that could lead to unintended and unfortunate results. (That's called "ethnic stereotyping.")

TLC's Douglas vows this won't be "Jersey Shore"-meets-"Claws." "It's a true family show with a sense of humor," she says. "It'll show the funny times and when there are hard times, where there are emotions, we'll show those too. At the end of the day, it's about a family that loves each other and that has each other's backs."

Jennifer, meanwhile, can't imagine how one little TV show could even begin to change who the Martones really are, much less want to.

"We are real," she insists, as if that fact isn't already abundantly obvious. For "Unpolished," that should be good enough.