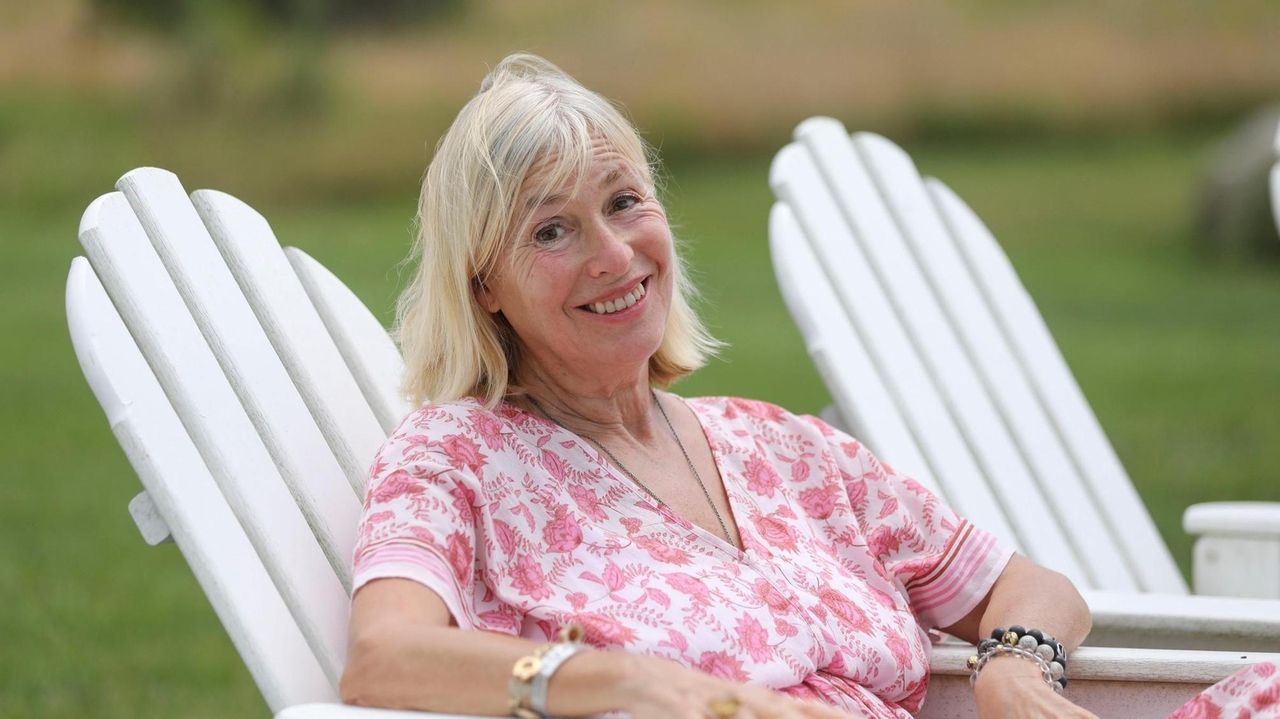 The faces in the film are old but one of them is 103-years-old.

"One hundred-and-three and a half," Stella Craig corrects.

Craig would be first to admit that she's not who she once was. That "103 and 1/2" does all the talking on that point. Nevertheless, she is writing her seventh book. She remembers lyrics from songs that were popular oh-so-long-ago and from a world far, far away.

She playfully dismisses the octogenarian Lothario with "You'll have to get in line."

Mostly, she's happy. She says she is. You believe her after a while.

Stella is the star of a film crafted in her own blithe image, or certainly in her blithe spirit — eponymous "Stella & Co.: A Romantic Musical Comedy Documentary about Aging," produced by her daughter and Sag Harbor resident, Robin Melanie Leacock, airing on WLIW/21 Wednesday, July 22, at 10 p.m. (or streamed here.) It was filmed a couple of years ago at a senior facility in Palm Beach, Florida. Other people are interviewed, also members of that demographic the culture largely dismisses as "elderly" or (worse) superannuated.

They are also happy. Like Stella, they say they are anyway. What do they know that we don't?

What do they know that we should?

That "sans" is the Shakespearean sting that endures, as if the process of aging is the brute force of demolition, whereby one is stripped, degraded, annulled, erased until nothing is left except the "foul rag and bone shop of the heart."

Yes, more poetry (Yeats). Poets, especially as they get older, tend to get fixated on this aging business.

Not one Estelle Craig. Too busy for poets and their flowery laments. Always been too busy. Born in Massachusetts, she moved to Toronto as a young adult, where she became a newspaper columnist and hosted a Toronto interview series about world-famous adventurers. She wrote books, produced plays, became president of the Toronto Women's Press Club.

She also raised three children, one of whom would memorialize her in a warm, loving portrait that's really about the true nature of happiness.

"I spent the last 17 years hanging out with my mom," said Leacock in a phone interview, "and decided quite clearly in 2000 when we lost my father [Louis David Craig, who started a pharmaceutical company in Toronto] that I wasn't going to abandon her in her older age."

Leacock, who produced another film on Stella when she turned 95, also decided to become her mom's Boswell "because she was so much fun. I was lucky enough to have a really charismatic, brilliant mother [and] I often thought that being with her was like being with an anchor in an incredibly busy sea."

An artist and veteran filmmaker, Leacock married long ago into cinematography royalty: Her husband, Robert, is an esteemed cinematographer who collaborated with Al Pacino on various documentaries. Robert Leacock is son of Richard Leacock, who died in 2011 and was one of the pioneers of the vastly influential "direct cinema"-style of documentary filmmaking (think: handheld cameras and a you-are-there perspective).

Her husband, who retired years ago, didn't work on "Stella" but it's clear that a Leacock aesthetic worked its way into this film — the camera's steady gaze at subjects who seem unaware of its presence and thus more apt to explain their inner worlds.

Their worlds appear simple enough, their secrets reduced to those basics we've all heard before but may not fully appreciate: "Don't hold a grudge." "Make the best of every day." "Don't worry about the future." "Walk a lot." "Stop. Smell the roses." "Focus on the good things, not the bad." "Tomorrow will be better."

Leacock filmed them long before a worldwide pandemic struck. Luck would also appear to be a big part of their life stories, as Leacock readily acknowledges. But years of close encounters with the elderly proved to her that happiness was disconnected from the world beyond. Happiness just was, or something untethered to the existential threats that roil our incredibly busy seas.

Social scientists have a term for this — the "paradox of aging." Laura L. Carstensen, founding director of the Stanford Center on Longevity, who has led research on this, has said in various TED talks that older people are indeed happier than the middle-aged or the young, while her research indicates that the "paradox" in part comes from something so obvious that it's reductive: The elderly accept their impending death. This acceptance frees them, or at least clears away the mental underbrush.

All gone. What's left is the present moment, the right here, the right now. In that moment remains happiness.

"It became quite clear to me," says Leacock, "that just because you've been here for a longer time on the planet doesn't mean you've lost your identity. You are still you. Obviously if you've had problems with Alzheimers or dementia, it's a completely different story, but if you've managed to live a healthy life, that life can be quite extraordinary when you are older."

And the secret to that life, whether advanced or not? Leacock says she knows — "to live it in the moment."

Not long after filming wrapped, Stella Craig died on Feb. 11, 2019, just weeks before her 104th birthday. Leacock knows that her spirit endures. Perhaps Stella also has a message for the rest of us, a resonant one, as paraphrased from her own film: "Don't worry too much. Be happy as often as possible. You'll get through this. After all, I did."