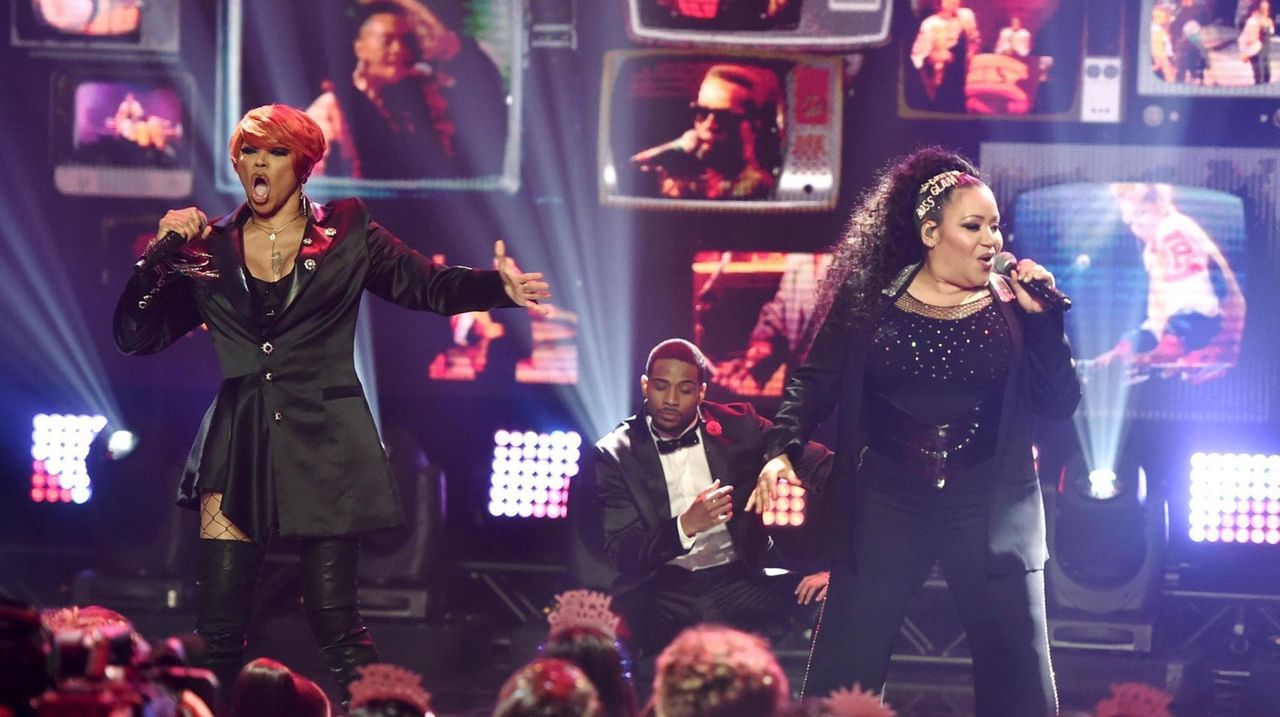 Long Islander Cheryl James, aka Salt, of hip-hop group Salt-N-Pepa, recalls some of the stories told in Lifetime’s biopic of the rappers that premieres Saturday at 8 p.m. Credit: Newsday

The life story of Long Island hip-hop pioneer Cheryl "Salt" James will be on display in "Salt-N-Pepa," a biopic about the popular musical duo that will air Saturday, Jan. 23, at 8 p.m. on basic cable's Lifetime.

"It's a story of two women in the music industry, and a male-dominated genre of music," said James, who serves as executive producer on the film with her longtime partner, Sandra "Pepa" Denton. "It's a success story and it's something I think women can really relate to."

Directed by Mario Van Peebles, "Salt-N-Pepa" features GG Townson as James and Laila Odom as Denton, New York City natives who met in Queens in 1985 and began performing under the guidance of budding producer Hurby "Love Bug" Azor (Cleveland Berto). The film traces Salt-N-Pepa’s rise from schoolyard rap battles to global arenas on the strength of such hits as "Push It," "Let’s Talk About Sex," "Whatta Man" and "Shoop." Their 1986 debut album, "Hot, Cool & Vicious," made them the first female rap act to reach gold and then platinum status; 1993’s "Very Necessary" sold over 7 million copies to become the bestselling album by a female rap act. Salt-N-Pepa were recently confirmed to receive a star on the Hollywood Walk of Fame once COVID-19 protocols allow.

"Salt-N-Pepa" reveals several little-known details about the duo, such as their tenure at a Sears call center in Queens alongside another aspiring hip-hop duo, Kid ‘n Play, and future comedian Martin Lawrence. "I didn't think he was funny," James said. "He sat in the cubicle next to me. I was like: 'He’ll never make it!' But we all had a dream, and actually one of his first shows was opening up for us at a club in Manhattan." Christopher "Play" Martin would go on to design Salt-N-Pepa’s colorful letterman jackets and stylized logo.

The movie also delves into deeper issues. Both women struggled through rocky romances: James dated Azor, her producer, for years; her marriage to Gavin Wray, with whom she had two children, ended in 2018. Denton’s marriage to Naughty by Nature rapper Treach was short-lived. Both women became mothers while still performing and recording. James also struggled with an eating disorder.

"Teenage girls usually have some sort of body issues," James said. "But then you throw that girl into being a celebrity and always taking photos and being on red carpets and the limelight and the pressure of trying to be thin … It’s very common that can turn into an eating disorder. I felt all of that pressure."

Salt-N-Pepa disbanded in 2002 — "I don’t want to be Salt anymore," James says in the film — but reunited after their appearance at VH1’s Hip-Hop Honors in 2005. (Queen Latifah, who introduced them at the event, is a producer of the film.) James, who moved to Long Island nearly 30 years ago, first to Dix Hills and then to her current home in Melville, says she’s looking to sell her home now that both her children are adults. She’d also like to begin dating again.

"I haven't had a date yet, but I'm just putting it out there," said James, 54. "People are afraid of celebrities. They’re so intimidated, we barely get approached. It's a problem."