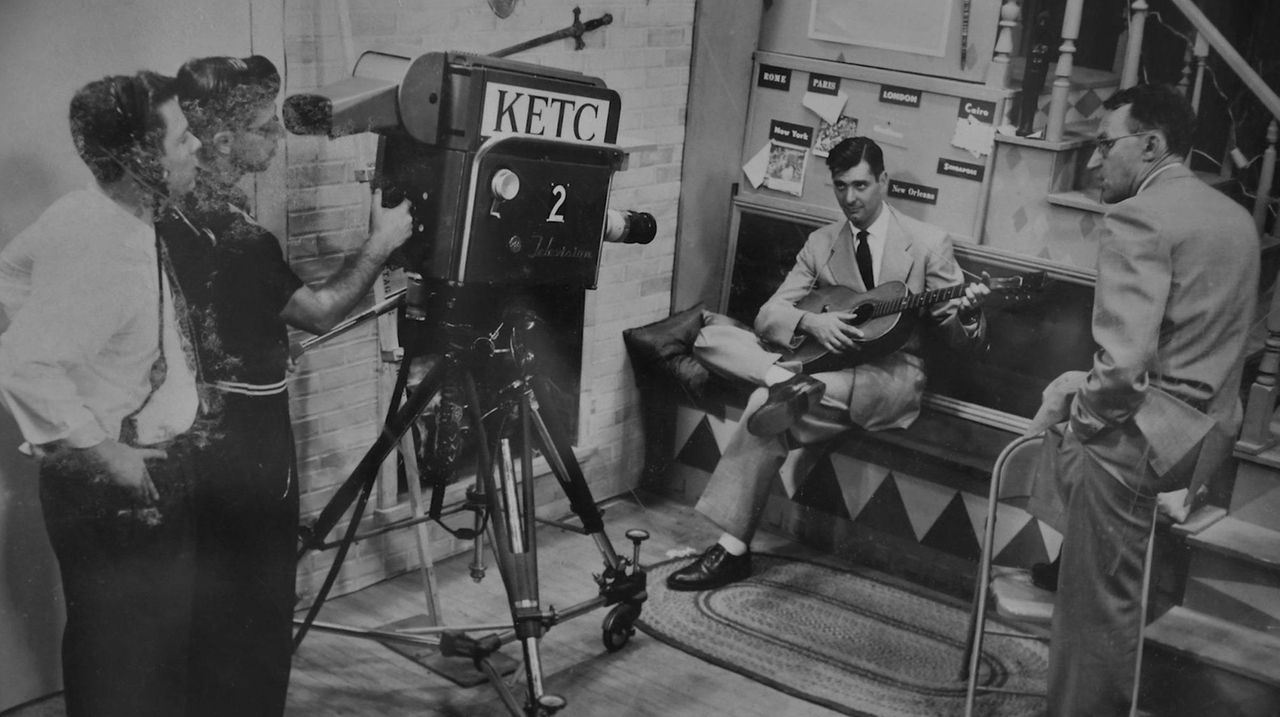 Starting in the 1950's Sonny Fox had a long and storied carrier as a broadcaster but is best known for hosting “Wonderama,” a pioneering kids' TV program, from 1959-67.  Newsday caught up with the reitred Fox in Sherman Oaks, California on February 27, 2020. Credit: John McCoy

Where to begin with Sonny Fox? As always and forever, "Wonderama," his beloved show for WABD (later, WNEW, now WNYW/5) which he hosted from 1959 to 1967. But there's so much more. In December, 1944, his unit — Company E, 110th Regiment, 28th Division — was captured by German troops during the Battle of the Bulge and he rode out the war in a prison camp. A Jewish prisoner.

He returned stateside to a whole new world, where TV was beginning and its possibilities seemed limitless. The lanky and — as that TV would soon establish — telegenic Fox hosted a weekly CBS show, "Let's Take a Trip," then the megahit game show "The $64,000 Challenge." A fortuitous gaffe ended that gig (he accidentally gave away an answer), which led to the next:

.At "Wonderama," Fox was a pioneer who spoke to children as equals. The show  was both a hit and inspiration to the rest of an industry just then awakening to the possibilities of children's TV, for both good and ill. His "Wonderama" was for the good.

He's 94 now, living in an assisted living facility in Sherman Oaks, California. An edited version of our recent interview:

My memory is porous, but the longer back I go, the better it is. What happened last night — forget about it — but the further back I go, it's remarkable how much I remember.

How long have you lived in L. A.? Does your family live out here now, too?

I moved out in 1970 because that's where the industry had moved. I had four children — one died — and two live near me.

Since you brought up deep memories, let's go down that particular lane. You grew up in Brooklyn — Flatbush — and seemed to have had a happy childhood, but I recall you once said your ambition was also to get through a day without getting beaten up.

Well, that was a little extreme, but when I was a kid — 8, 9, 10 — I was a year and a half younger than anyone else around [because he had been placed in a grade ahead] and I was cowed from time to time. I wasn't able to defend myself physically and it wasn't until I went into the army when I was with people my age — we were all 18. My mother pushed me ahead. Yeah, I was bright but she wore that like a medal on her lapel — 'look at my son!' But my sister moved ahead on her merits.

You once wrote that after you were captured, you felt a sense of dread and curiosity. Which was stronger?

I was going through the mirror to the other side, and I was curious as to what was on the other side, and thought, 'OK, this is a new thing. How does this work?' I found out soon enough not very well. But after curiosity came that will, or ability not to surrender. You might have to surrender physically, but not mentally or emotionally. That no matter what you are facing, you can say to yourself 'OK, this is something I can get through.

You came out a different person. How?

Simply that I had dealt with the situation and had — at a crucial point — taken back control of my own life. That gave me a lot of confidence. For example, when I was fired from '64,000 Challenge,' it was pretty humiliating and I spent some time in a funk, but not for long. I recovered and became what I was to become [professionally]. It was good I got fired. ['64,000'] wasn't something I wanted to do anyway.

Explain your varied and itinerant career?

Things just happened. There's nothing in my life that I set out to do. I decided to go to NYU [after the war] because it was the first university in America that had a course of radio productions, and [later met] Alan Funt [creator of 'Candid Camera'] who was also just starting out and he employed me on one of his [radio] shows. Then, I later went to St. Louis to work at a new [educational TV] station and got a show at 4 p.m. for one hour a day [with] an audience of of kids in the studio and I'd walk to them and chat with them..That gave me a whole new direction of where I could go and would go.

"$64,000 Challenge" was one of those window-closes-door-opens moments, right?

"Wonderama" had been on the air [and] it was this whole new world where [Ch. 5 owner Metromedia] told me I could operate with no limitations. The whole thing was an adventure. They wanted it to be instructive but told me 'we didn't hire you to drive people away' either. The show that had been on before had been for little kids [but] I was interested in the nine-to-twelve-year-old audience. Their minds were ready to grab the world and already had the fundamentals down.

Did you love the attention and the show?

I loved it. But the joy I had from 'Wonderama' came from chatting with the kids. I loved chatting with them, expanding their world. All of that fed into me so directly. It was a joy. It was also a living and livelihood, but I never got up in the morning and said, 'God, do I have to do that again?' I never had that feeling. Each week had a different set of kids and each week you could discover a different part of them, or give them something they hadn't seen before. It was a never-ending challenge to me.

Never any baby talk either. You always seemed to treat your young viewers as equals.

I found them fascinating and the great thing about dealing with that age group is that you had no idea where [a discussion] would go. It took its whole natural course — what is it like to be your age? What turns you on? What turns you off? What makes you giggle? Then you could take them on adventures — so the show traveled to places like Finland and Israel. I enlarged their world while selling them commercials [laughs].

Was, in fact, the show over-commercialized?

Forty commercials [per edition]. That was the limit. Thank God there was a [FCC] rule that you couldn't have more. It was obviously not my favorite part of the show.

Meanwhile, you had Sen. Robert F. Kennedy on the show as a more or less regular at Christmas?

He was wonderful. Didn't talk down to them and if you look, when we're sitting side by side, even when I was asking him a question, he wouldn't take his eyes off the kids.He was always relating.

Did you ever have children of color on the show?

No [because] they didn't think they had access to it. I remember going to Harlem once, and a kid says to me, 'what are you doing up here?' We never did outreach [because] there was a five-year delay in filling ticket back-orders. They watched the show the same as everyone else but never assumed they could be on it. Yes, I'm sad about that.

I had done 'Wonderama' for eight years, and I was open and ready for a new challenge which didn't work out wonderfully well, but it was the right thing for me to do at that time … But yes, subsequently I think I made a mistake in leaving, but you don't rue or hold regrets. That doesn't take you anywhere.

How would you do 'Wonderama' now in this age of too-much-media?

Kids are still kids and don't care what the apparatus is in their hands or in their bedrooms. They still have the same curiosity, the same disappointments, and still have to go through the same evolutions to becoming an adult. From being children to becoming young adults is still an adventure, still a trial.

And through the years, the power of "Wonderama" endures. Do you still hear from your young fans?

I've gotten such interesting letters, remembering me, what it still means to them. [I] have a website and had a hundred congratulations from people everywhere to say happy birthday this past June. It amazes me, these are people in their seventies.

After a brief stop at NBC (chief of kids' TV) you became an independent producer then head of PCI — Population Communications International — which embedded pro-social messages in soap operas.

[PCI deployed] this new powerful form of storytelling to change social attitudes [in various countries]. It was fascinating and that's what I did for the better part of 22 years — go to these countries where TV was just coming into fruition to explain how it could have a beneficial social effect.

My beloved son, Chris, died three years ago. When he was 14, his mind became unmoored and he had to be institutionalized [but in recent years] we had lunch every week, sometimes talked to each other, sometimes he sat in silence, but I never missed a week until he died.

Otherwise, I have no regrets, no sense of unfulfilled dreams. I've lived a full life and what's remarkable — well, at this age — is that my mind is still cogent. Tomorrow, I'll be jumping and leaping around.