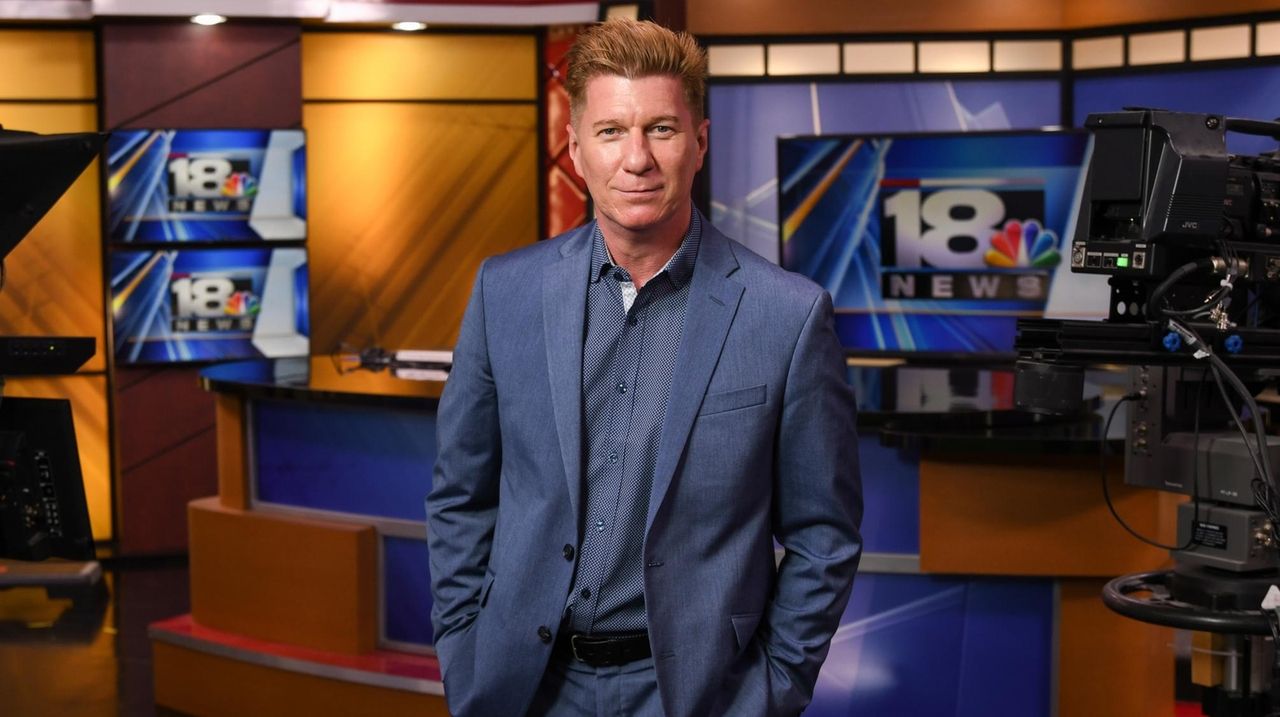 Newsday sat down with former News 12 anchor Stone Grissom to discuss life since leaving News 12 last year and his new role at a TV station in Elmira. Credit: Heather Ainsworth

Up until last August, Stone Grissom was the face of News 12 Long Island. Then, in a flash, that face was gone. The anchor who had clocked thousands of hours on the air, who had led News 12's coverage of every major news event over the prior decade, fought back tears at the end of an emotional farewell on Aug. 14, 8:37 p.m., then said goodbye.

The departure was big news in Long Island media circles in part because he never explained why he left, and because top News 12 anchors don't leave all that often. Popular ones (like Carol Silva) sometimes stay for decades. Moreover, Grissom, 46, was part of LI culture; he lived here (Oyster Bay), raised his daughter here, while his wife — Dr. Maureen Grissom — was raised in Wantagh.

Last October, Grissom joined WETM/18, the NBC affiliate in upstate Elmira, where he is news director and anchor. He now commutes from there on weekends to Houston, where his wife is clinical associate professor in the Department of Behavioral and Social Sciences at the University of Houston College of Medicine.

Grissom recently spoke to Newsday's Verne Gay about his dramatic exit, and his career.

Let's start by addressing the elephant in the room: Why did you leave?

Some of it was a long time coming and some it was simply that it was time. [But] I have nothing but great memories, great things to say about the management and the people there.

So what was the reason?

Part of it was the direction that I felt the company [was going in]. I mean, it's not a secret that Cablevision was sold to a different company [Altice] that had no connection to Long Island, and as companies do — there's nothing wrong with this — they just have a different focus and take the business in a direction that's better for them. I felt like I was losing my spot at News 12 — I wanted to be more involved …. There were some issues that I had with management and management had with me.

'Losing your spot.' What did you mean by that?

I told this story on the air my last day, but when I started [Hurricane Irene] was hitting Long Island] and it was my first day, which was supposed to be an administrative day but my boss and news director [Pat Dolan, who now owns Newsday] looked at me and said, 'you're my face of Long Island. I just hired you. You see that chair over there — take that chair.' It was a wonderful experience because it was pure journalism [then] a little while later [we] embedded ourselves with a group of Long Islanders who were part of the Occupy Wall Street movement. [Those sorts of stories] are expensive, but it's a community thing to do. I'm not saying that's gone because there are still tremendous journalists there [but] it seemed to me that focus and the emphasis changed, and that we were headed in a different direction.

Can you elaborate? It was moving away from this hyper local focus on our community and Long Island to more of a regional focus. I wanted to have more say in the content [but] we were moving away from the anchors being somewhat of the gatekeeper on those decisions. Again,not blaming anyone,no hard feelings and there wasn't some flashpoint... It was just incremental. [A spokeswoman for News 12 declined comment.]You left in the midst of an historic year. Did you feel News 12 had scaled back coverage of the pandemic?

In your farewell note, you said 'I don't know what my future holds …' At the time, was that true?

I didn't really have a sense of what I was going to do. I just had a sense that this was the right decision.

You're not originally from LI, so what is your life story?

I was born in Tennessee — Knoxville — but lived there until I was two, then moved to Albuquerque. I grew up there until the 7th grade, then my parents got divorced and my mother, who is from Mississippi, moved there. I lived there until halfway through high school then became an exchange student in Germany and finished high school there. Then, Washington State for college, graduate school in Canada and then moved to Los Angeles. Then, went to Notre Dame for law school, moved back to Washington [state], and practiced there, Missouri, Louisiana and then Connecticut.

What was graduate school? The University of Vancouver Film School So that explains the fascinating clip reel on YouTube, where we see you as a young actor in various roles …I thought I was going to be the next Brad Pitt [laughs] and obviously that didn't happen. Why not stick it out? Because that's what most people do — they suffer and finally get their role on some bad sitcom. Yes, but bad sitcoms pay well. I loved the acting part but didn't like the business side of it. Early on, I said to myself, I'm gonna end up being an 85-year-old bartender who's auditioning every once in a while for a part. Either that, or I can go live my life

I thought, you know, maybe there's something else for me to explore and try out. [And as a frequent on-air cable network commentator] it was starting to feel like I'm conveying information instead of being part of the story that's being developed. As an anchor, you have this tremendous ability to really develop your stories

Wasn't going to a small station in Elmira a big comedown after working in the largest market in the country?

It's a fair question and one I've grappled with but this was an opportunity to put my footprint on a station, and allow me to grab that inner passion that I've always had for journalism and telling stories to the community. Local news is the last bastion for real community involvement, regardless of whether you live in Elmira or you live in Massapequa or Wantagh.

I don't regret leaving [News 12] but I do miss on a daily basis not getting to tell Long Island stories [and] I do miss Long Island. About a month and a half ago, I was walking through the airport in Washington, D.C., and someone yelled out, 'Hey Stone!' and I turned and it was a Long Island couple right there, and came up to me, and it was like a family reunion. Almost like we were Long Islanders who had found each other somewhere else … It brought back those really great memories that I will always hold dear.

Before I let you go, I know you've been working on a new novel. Any LI refs in there? There are going to be some Long Island references but … I've put it on the back burner because I started writing a memoir, for lack of a better term, about stories that were inspired by what we were going through during the pandemic. I've enjoyed it and wrote it as more of an exercise for me. Writers, if they're doing it correctly, write for themselves and hopefully other people will enjoy it.

You've had a few prominent careers in your life. If you had to pick just one, what would you call yourself?

I hope I would call myself a journalist.