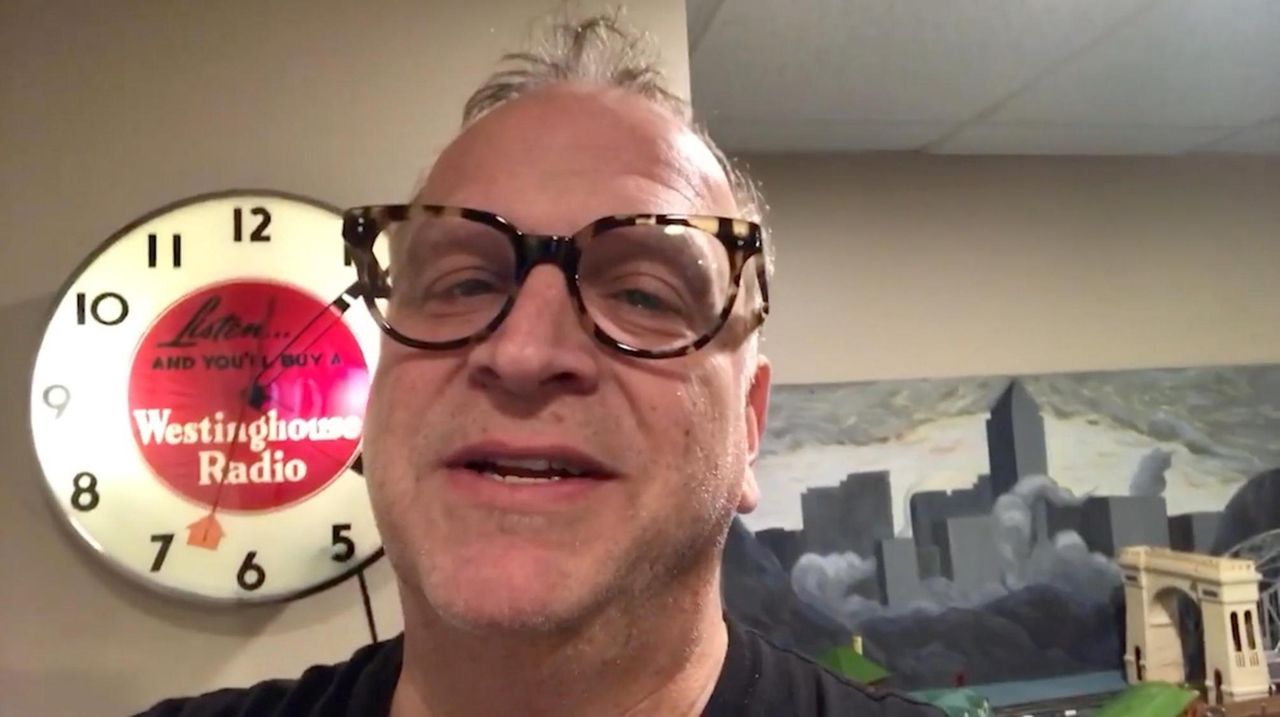 This contest entry video helped Ernie Mannix to be selected as one of Turner Classic Movies' biggest fans. He will introduce "North by Northwest" and dedicate the film to his mother on April 24. Credit: TCM

Ernie Mannix may not watch a lot of television, but he knows what he likes. “I watch the Islanders and TCM, that’s about it,” he says. Now Mannix, of East Northport, is getting to appear on one of his favorite programs — and no, he won’t be donning ice skates and shin guards.

Wednesday night, April 24, at 10:45, he’ll sit down with Turner Classic Movies host Ben Mankiewicz to introduce a screening of the 1959 Alfred Hitchcock spy thriller “North by Northwest,” starring Cary Grant. Mannix, who grew up in North Massapequa and has worked as a composer and music editor in films and television, was one of 25 people selected as TCM’s biggest fans after submitting a video entry in a contest the vintage movie channel ran last fall to help celebrate its silver anniversary this month.

In his video, Mannix spent much time talking about his mother, Joan, who died in September at 82. “She basically introduced me to classic films. She had her television glued to TCM. And she was an avid Cary Grant fan,” Mannix says.

Here’s what else he had to say about “North by Northwest” and other movies that inspired him.

What made you submit a video?

They were advertising the contest and it was right after my mom died. At first I didn’t feel like doing it. Then one day, I just hit the record button on my iPhone. I knew the parameters were to keep it at a minute and 30 seconds. I started talking about my mom and how much she loved TCM and about the film. I didn’t do any prep, and when I hit the off button it was exactly a minute and 30 seconds. And I thought, that’s weird. I didn’t edit it, I didn’t do a thing. I shipped it off to TCM and I didn’t think about it. I got the call a few weeks later.

Did they say why they chose it?

They told me that it felt heartfelt and they were moved by the dedication to my mom. It got noticed. Maybe my mom had something to do with that?

Some of “North by Northwest” was shot on Long Island. Was that also a factor in choosing it?

There were some great scenes filmed at Old Westbury Gardens and the Phipps Estate. A couple of years ago my mom and I went there. I said to her, “Here’s that shot, where Cary Grant is getting out of the limousine and is basically being forced into the house.”

Why do you think the movie still holds up 60 years later?

It’s a very modern film. As I said to Ben, Hitchcock was the master of angst. Think about “Rear Window,” where Jimmy Stewart is in a wheelchair and he can’t get out. You feel that angst. It’s the same with this picture because Cary Grant is involved in a horrible case of mistaken identity. This man is going to be killed and he’s not who anyone thinks he is, and he’s being played by both sides. Everyone is laughing at Cary Grant in the picture, even his own mother. You really feel for him.

Do you remember the first film that got you hooked on movies?

“The Wizard of Oz,” which would get shown every year when I was a kid. Also, the early Universal horror films and a show called “Creature Features.” My mom used to let me stay up late when it was on and we would watch those movies together.

Is “North by Northwest” your favorite movie or do you have another?

I probably have a Top 10 list of favorites. “North by Northwest” is definitely in that Top 10. I love “It’s a Mad, Mad, Mad, Mad World.” I love “Broadway Danny Rose” by Woody Allen. “The Man Who Came to Dinner.” You can’t have just one. You can’t eat one food for the rest of your life and you can’t watch just one film.