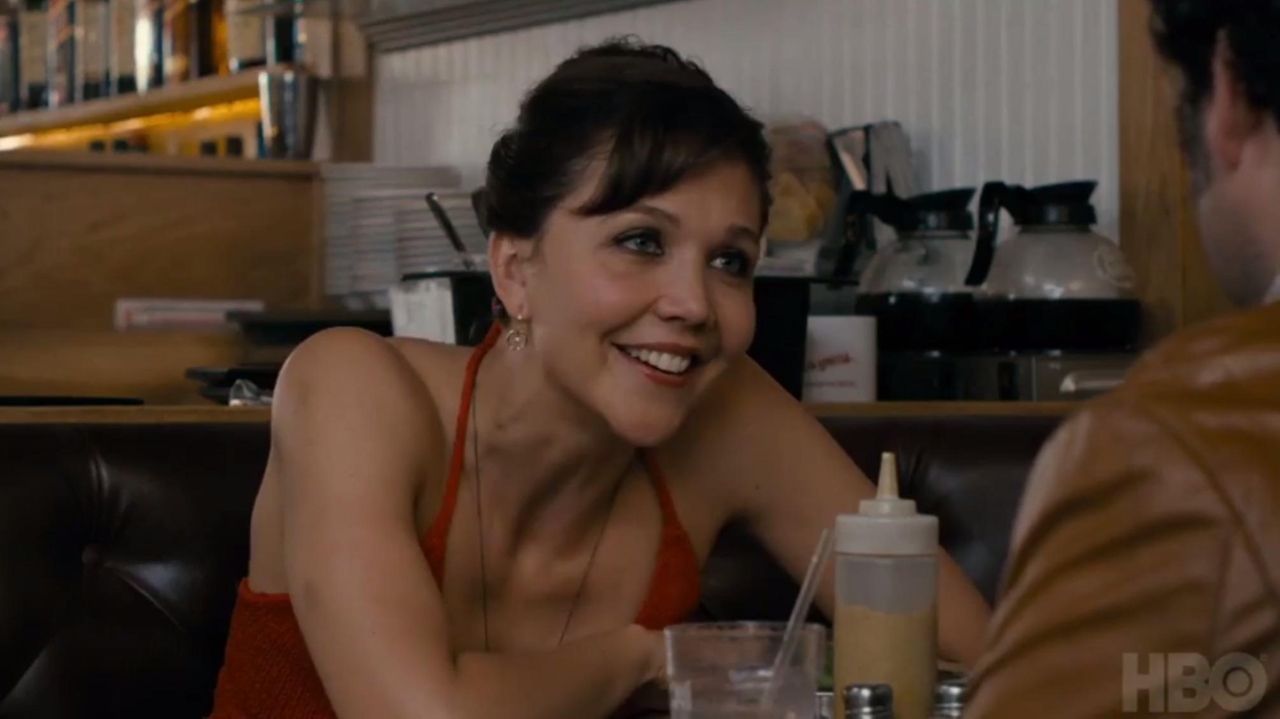 James Franco plays two roles in the new HBO series, "The Deuce," set in the Times Square of the 1970s. Credit: HBO

THE SHOW “The Deuce”

WHAT IT’S ABOUT It’s 1971 and  Vincent Martino (James Franco) is trying to run a bar, while covering his twin brother Frankie’s (also Franco) failed bets. He accepts an offer he can’t refuse from local wiseguy Rudy Pipilo (Michael Rispoli) that will eventually bring him into the tight orbit of Times Square call girls, including  Darlene (Dominique Fishback), and Lori (Emily Meade), along with their pimps C.C. (Gary Carr), Larry (Gbenga Akinnagbe) and Rodney (Method Man). One of the prostitutes, Eileen “Candy” Merrell (Maggie Gyllenhaal) has ambitions beyond the street: The big, seedy screen. Meanwhile, the cops — led by Officer Chris Alston (Lawrence Gilliard Jr.) — are watching and occasionally they even do something about the illegal “flesh” trade.  (There’s a Long Island connection here, too: Huntington native Ralph Macchio has a bit part as a cop.) This short-run series was co-created by crime novelist George Pelecanos (“The Big Blowdown”) and David Simon (“The Wire”).

MY SAY The National Center on Sexual Exploitation — a Washington-based advocacy group against pornography and other forms of sexual exploitation — last week said “The Deuce” “glorifies” and “normalizes”  prostitution and violence against women, and that HBO should shelve it.  Because these are serious charges, let’s deal with them at the outset here: Does “The Deuce” indeed “glorify and normalize” the subject matter?

Certainly to some degree “The Deuce” is exploitative because plenty of viewers will tune in just for the sex. A particularly disturbing subset of those will tune in to watch the violence against women. While  the portrayal of physical violence is fairly muted in “The Deuce,” there are other forms of violence against women, notably psychological, and these women endure lots of that.

Civilized viewers and readers can agree that violence against women should never be used as a pretext for any TV series — even though many series do precisely that. What, then, is compensatory about “The Deuce?”

First off, let's deal with the stuff everyone probably wants to know about. You know -- the sex stuff.

Also, any David Simon TV project has literary ambitions and this one is no different. Like "The Wire," it’s immersive in a Dickensian sense by dragging you into the gutter, where you can watch a cat-sized rat take in the view with you. (There is even a Dickens reference in an early hour. Hints: "Tale," "Two Cities.")  The period details are absolutely flawless, right down to the cracked, grime-stained window  of a city bus, or the marquee touting a double-feature of “Mondo Trasho” and “Trader Hornee.” You are there in Times Square circa 1971, whether you want to be there or not.

While the “deuce” of the title refers to 42nd Street, it really refers to the duality of human nature, which is a theme as old as the Bible. Dickens knew a little something about that: How people have two sides, one good, one bad, and sometimes those sides get all mixed up so you can’t tell which is which. There are physically two Vincents but also two Maggies. In fact, everyone in “The Deuce” has a psychological double whom you’ll get to meet in due time.

The huge cast is excellent. Franco will convert any doubters, or any held over from “Oz the Great and Powerful.”  Gyllenhaal will end up with an Emmy nod, too.  She’d better: She not only becomes Candy but endures what Candy must endure. Whether you like this performance or not (I did), it took guts.

In fact, the biggest problem with “Deuce” isn’t “glorification and normalization” — there is none — but story. There’s no driving narrative until at least the fifth episode. That’s an awfully long time to wait for something big to happen in an eight-episode season. At least “The Deuce” makes a case that it’s worth the wait.

BOTTOM LINE Potential viewers take warning — there are some scenes here which will offend many and shock others. But get past those (if possible), and “The Deuce” is largely excellent. The story lags, but the cast never does.