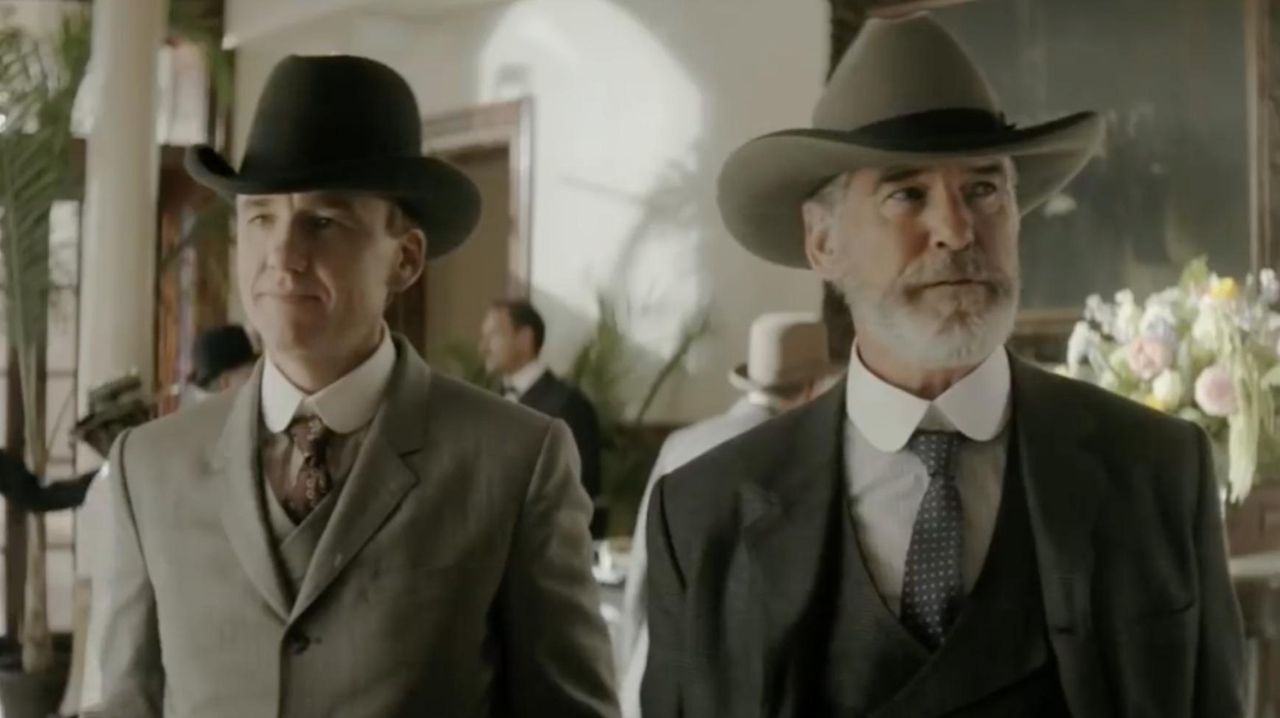 THE MINISERIES “The Son”

WHEN | WHERE Premieres Saturday at 9 p.m. on AMC

WHAT IT’S ABOUT Texas became a state on Dec. 29, 1845, and also on this day, Eli McCullough (Pierce Brosnan) was born, eventually earning him the sobriquet “First Son of Texas.” As a teen, Eli (Jacob Lofland) was kidnapped by a band of Comanches, and raised — or at least shielded — by their leader, Toshaway (Zahn McClarnon, “Fargo”). He later returns to Anglo society, where he accrues wealth, property and enemies — notably his equally wealthy Spanish neighbor, Pedro Garcia (Carlos Bardem). He also has two sons, including Pete (Henry Garrett), who’s softer than his tough old man. The story is told in present time (1915) and in flashbacks (mid-19th century, when Eli was held captive). This 10-part miniseries — I’ve seen the first two hours — is based on Philipp Meyer’s 2013 bestseller, which was also a Pulitzer finalist.

MY SAY There are a couple of reasons to get excited about “The Son.” One is on screen, one off. Starting with the “on-screen,” that should be immediately obvious. With his immaculately trimmed gray beard and dagger blue eyes, Brosnan almost instantly establishes himself as TV’s most treacherous Texan since J.R. Ewing — until he starts to speak. It’s at this point the soft lilting cadence of his native Drogheda, County Louth fights the south Texas drawl. Viewers will just have to pretend that this “First Son of Texas” emigrated from Ireland before he ran into the Comanches.

The off-screen reason is Philipp Meyer. “The Son” is the first TV series from El Jefe (The Boss), a production company he launched with a couple of other writers to give an author creative control over his or her adapted novel. That’s a radical departure in Hollywood where book authors are usually just given a pat on the head, then told to cash the check and leave the show to the professionals.

Not Meyer: He’s written almost all of this miniseries and also (according to this story by Alexandra Alter) insisted that neither his book’s details nor vision be sacrificed at the altar of ratings. For viewers, that’s auspicious because TV and film history is littered with bastardized versions of good novels (and their embittered authors). With this in mind, Saturday’s launch is promising, if not entirely conclusive.

Under those broad Texas skies where generational and cross-border squabbles simmer, “The Son” screams either lit-minded epic — or another TV adaptation of a Larry McMurtry opus, only more violent.

“The Son” does seem to be circling some big and even contemporary themes. It’s interested in the idea of nationhood, and how that shifts from generation to generation, or how the cycles of history further reorder it. Meyer was also influenced by William Faulkner, so that means “The Son” is obsessed with how the past isn’t even past, but ever-present. He was further influenced by Cormac McCarthy, and that means there will be blood (and plenty of it).

The brutality in the opener is graphic, but serves the obvious point that Manifest Destiny had brutal masters. The Comanches are neither idealized nor demonized, but actually humanized. They also speak a real Comanche dialect (Ever the stickler, Meyer insisted on it).

But “The Son” is mostly about a son with two fathers, one white, the other Comanche. He absorbs the soul, spirit and perspective of the latter. It’s a particularly interesting idea and character based on a celebrated book. Here’s hoping the miniseries lives up to the promise. Saturday’s opener suggests that it should.

BOTTOM LINE Brosnan is back on TV! Now that we’ve gotten past the most exciting part of “The Son,” the show looks good, too.

Miss Universe to air live from Florida in May
Chris Harrison wants to stay on as 'Bachelor' host
'Coming 2 America': Lazy, charmless sequel
'King of Queens' cast to reunite for virtual benefit
Three LIers team up on Food Network show
Golden Globes ratings plunge 64% to 6.9M viewers
Didn’t find what you were looking for?