THE MOVIE  "The Week Of"

WHAT IT"S ABOUT Two families, one wealthy, the other working class, come together for a wedding in the Adam Sandler comedy “The Week Of.” It’s Sandler’s fourth film for Netflix, and it boasts some major talent in co-star Chris Rock and director Robert Smigel (“Saturday Night Live”). All told, “The Week Of” holds more promise than such previous Sandler-Netflix comedies as the Western “The Ridiculous 6” and the action-comedy “The Do-Over.”

MY SAY Sandler plays Kenny Lustig, a small-time contractor whose daughter is marrying the son of Dr. Kirby Cordice (Rock), a celebrity heart surgeon. Kenny insists on paying for the wedding as a father traditionally should, even though Kirby could spend 10 times the money without batting an eye. As Kenny cuts every corner to scrape together a wedding and hide his screw-ups from Kirby, the big day begins to shape up as a certain disaster.

That’s a sturdy if none-too-original setup for a comedy, and you might think the Sandler-Rock combo would have enough natural chemistry to make it work. (Even their subpar “Grown-Ups” movies had their moments.) Instead, minimal effort seems to have gone into this project. With its slapdash script (by Sandler and Smigel) and bare-bones production, “The Week Of” feels less like a proper movie and more like an overlong, unfunny webisode.

The list of missed opportunities is long, and begins with the story. Kenny and Kirby aren’t meeting for the first time and, in fact, like each other quite a bit. Not much humor there. Kenny’s plan to gussy up a budget-travel hotel as a wedding venue holds promise, but the results are disappointing: He installs a cheap chandelier that falls. There’s an amusing moment where Kenny invites two random black people into his house, assuming they must be Kirby’s relatives, but the film largely avoids ethnic humor. That’s probably for the best — but imagine if Rock had been a co-writer! Steve Buscemi, as Kenny’s crusty cousin Charles, provides one or two chuckles. 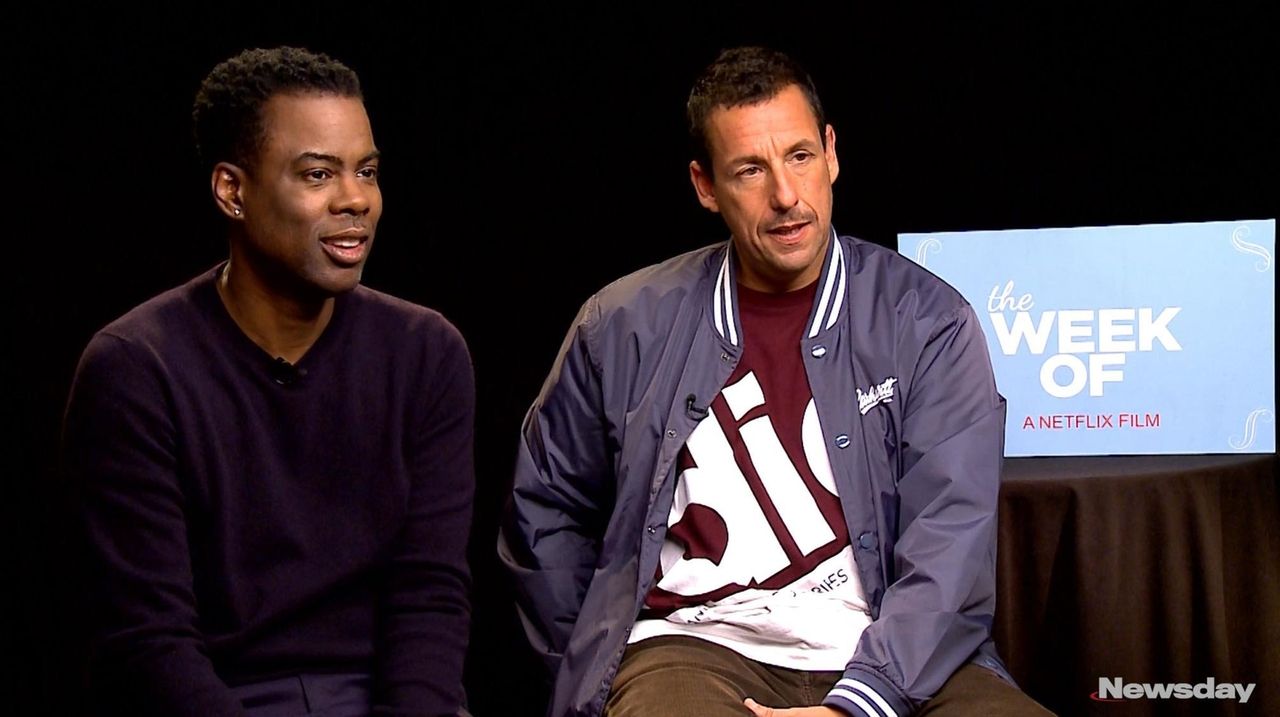 Rock, Sandler reflect on filming 'The Week Of' on LI Chris Rock and Adam Sandler, whose comedy "The Week Of" premieres Friday, April 27 on Netflix, talk about what it was like to film on Long Island last year. The movie includes scenes shot in Hicksville, Syosset and more.  Credit: News 12 Long Island

For Long Islanders, “The Week Of” will be a chance to play spot-the-backdrop (filming took place in several locales, including Glen Cove, Syosset and Hicksville), and the soundtrack features several Billy Joel tunes.

BOTTOM LINE There’s no way audiences would pay to see “The Week Of” at a theater. Even streaming it might feel like a rip-off.

Our film critic's zero-star and half-star reviewsWhat's the worst movie you've seen recently? Here's a look at the worst of the worst, per our critic. Rock, Sandler reflect on filming 'The Week Of' on LI

Chris Rock and Adam Sandler, whose comedy "The Week Of" premieres Friday, April 27 on Netflix, talk about what it was like to film on Long Island last year. The movie includes scenes shot in Hicksville, Syosset and more.