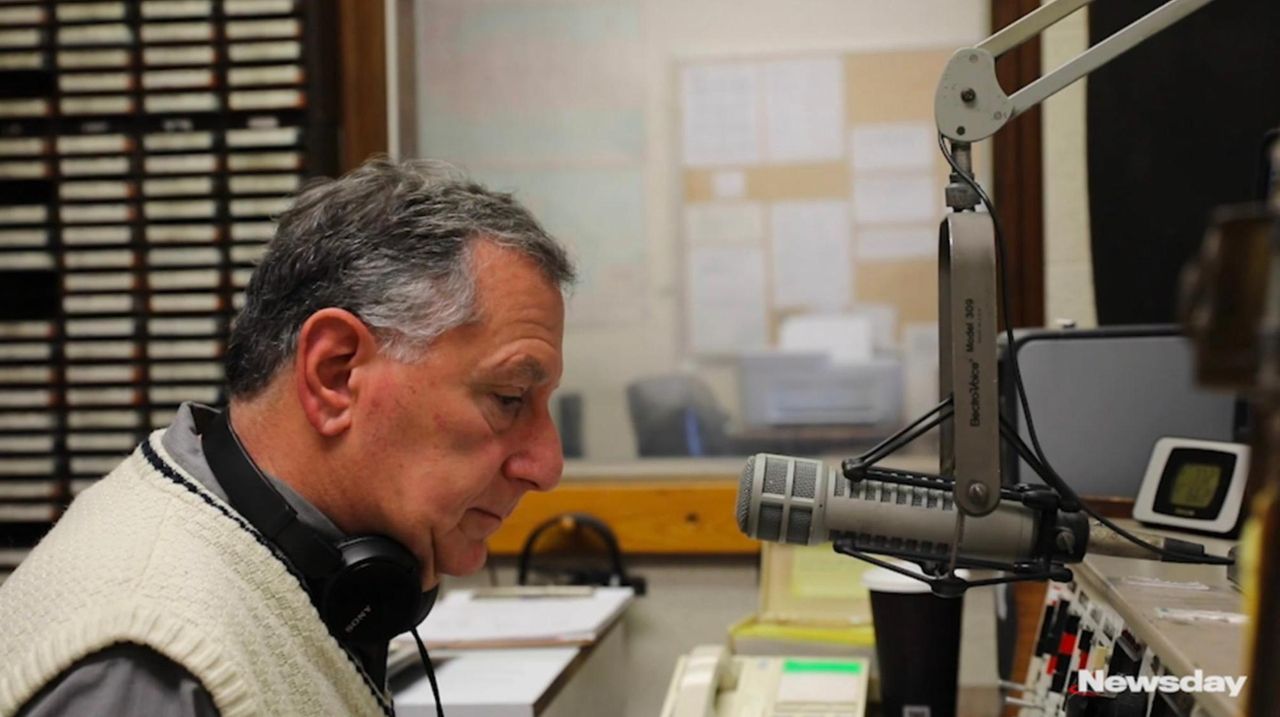 Although the medium of radio has changed over the years, Bruce Tria, general manager of WRIV-AM,  spoke to Newsday about why there will always be a need for local radio.  Credit: Morgan Campbell

Riverhead's hometown radio station, WRIV/1390 AM, is easy enough to find, a little less easy to get to. Its studio is on the third floor of West Main Street's 1899 Bank Building, and once inside the wheezy, creaking Beaux Arts mastodon, visitors must ascend three steep flights to the top floor. Instead of a receptionist, they're greeted by huge wall posters of Frank Sinatra and Humphrey Bogart and Dooley Wilson at the piano.

The Chairman of the Board and "Casablanca" — frozen in time, pretty much like WRIV, as a matter of fact.

The station turns 66 next week (June 20) and other than ownership and location, not much has changed around here. Remembrances of things past abound — thousands of old LPs, vintage radio equipment — and of a few things present too. The ceiling has water marks, for example, from a wet spring. Otherwise, the place is a time capsule, or as manager and morning host, Bruce Tria, explains, "this station is what it is since 1955."

What WRIV mostly is, however, is its longtime host. If small, independent radio stations — like houses or dogs — reflect the soul of their owners, then WRIV and Tria, 65, must be true soul mates. He has operated it since 1987 when his father, Vincent, an East Northport builder, bought it "mostly for something to do," he says. Instead, it was the son who found his life's calling.

In person, Tria is outgoing — if not quite unassuming. He's got a stocky build, once black-now-graying hair, an aquiline nose and penetrating, sharp eyes. They match, no doubt, his elbows. Warm and friendly in person, a somewhat different Tria emerges on the air. For the past 34 years, he has hosted "Dawn Patrol," weekdays from 6 to 10. It's a goulash of lost pet alerts, bulletins from the local constabulary (the Suffolk County Sheriff's office is just down the street) and news about local events, along with the occasional song — the "best music ever made," says the host, or at least "best" since from around 1950 to the mid-'70s.

There's lots of homespun humor in that goulash too. For the weather, Tria throws to "Vladimir" who is actually the host himself affecting a thick Russian accent similar to Mickey Rourke's menacing Ivan Vanko from "Iron Man." Tria's alter-ego even has a complicated back story and unusual food cravings (Mallomars, for some reason.)

"Strange as it sounds," says Tria, "some listeners have actually asked for a shoutout from Vladimir. It's the magic of radio."

Mostly "Dawn Patrol '' is a bullhorn — the host's (who else?), which he uses to prod and push the Republican-controlled town council over everything, although Tria's own pet obsession has long been downtown revitalization. (His father, who died four years ago, was a Democrat, while Tria is a Republican, although he insists such prods or pushes are not politically motivated.)

"There's world-class potential on that street, which sends me over the edge," he says. "We shouldn't have a single empty storefront on Main Street. Go to Patchogue! There's not an empty one there. We can't figure out what we want our Main Street to be and therefore it is nothing."

Asked about the local gadfly, Riverhead Councilwoman and frequent guest Catherine Kent laughs, then says, "I'm not sure he's that, but I've never had to hang up on him or been upset with the conversation in any way. I'm always comfortable expressing my point of view, and maybe sometimes feel that I've convinced him of that point of view too."

She adds, "the one thing Bruce and I always agree on is that we both love Riverhead."

Just under 20% of the nation's 11,000 FM and AM radio stations are owned by five major conglomerates. They've turned many of their stations into interchangeable commodities that sound the same and are the same. The thousands of other mom-and-pops out there — WRIV as the perfect example — are anything but.

Nevertheless, says Rob Frankel, a veteran radio producer (and Levittown native), "you'll see a big drop off in their numbers'" post-pandemic because "the [advertising] money just isn't there. Radio is no longer a profitable business, at least for now."

What will be lost, he says, are thousands of local gadflies with their own obsessions and eccentricities. Their own Trias too.

What then of WRIV or the handful of other distinct — and idiosyncratic — stations scattered across the East End, just now emerging from the pandemic? Frankel and others say they just might have luck and the loyalty of the affluent East End on their side. Even with the pandemic, Tria says WRIV makes enough money to cover operations and then some. He's got a staff on salary too, including 10 a.m. host Tony DeMauro — a former network TV executive, now retired and indulging his passion for radio — and Gabrielle McGough, the afternoon host. (Another station veteran, Jeff Fisher, hosts the Saturday "Dawn Patrol.")

Beyond talk — Tria's mostly — the station fills its air with lots of music (the vast playlist is comprised of about 2,000 songs) — and abundant hyperlocal color. Riverhead High's Blue Wave football and basketball games are broadcast, for example. So is a regular polka series, "Sunday Polka Time." Many of the loyal average-age 65-and-older listeners are descendants of Riverhead's large Polish immigrant population that arrived around the turn of the last century.

John Caracciolo, chief of JVC Broadcasting,which runs a string of Long Island and Florida stations, says WRIV weathered the pandemic by getting "down and dirty. Bruce is always looking for worms under rocks, constantly looking for sources of advertising income. He's a good local broadcaster and that's what's winning right now."

Born and raised in East Northport, Tria grew up listening to the legendary WNEW-AM host William B. Williams. Babylon-born Williams celebrated Sinatra — dubbing him "Chairman of the Board '' — and mastered a type of AM talk that made listeners feel like they were "hanging out with the stars," according to Tria. "He just brought you into the world and made you part of it." That's what Tria decided he was going to do too.

After college (Suffolk Community) he bounced around to a couple of other East End stations, including Sag Harbor's WLNG, at the time run by another local radio legend, Paul Sidney, who "fired me because I was a pain in the [butt]."

After his father bought the little station in Riverhead once owned by NBC News' Chet Huntley, he left his son to run its day-to-day affairs while he went off to remodel another legendary Riverhead venue, the Vail-Leavitt Music Hall on Peconic Avenue.

From that, a vision of a brighter future emerged — or at least one that has been Tria's obsession ever since. That desolate Main Street.

Yes, business during the pandemic was brutal, but he stood by his advertisers and many of them stood by him he says. In any event, WRIV has seen worse. The original studio across the street burned to the ground back in the '50s and another studio was also damaged by fire.

And yes, yes, (yes), of course the signal could be better, but listeners can still pick it up loud and clear as far west as Wading River, and as far east as Laurel. Oddly enough, WRIV gets better reception across the sound in Connecticut, from Bridgeport all the way to the Rhode Island border. "AM radio depends on ground conductivity and Long Island is a sandbar," Tria says. "AM signals do not do well here. Who knew!" (For those out of range, though, the station streams at www.1390wriv.com.)

Tria says he has no real idea how many people actually listen, but anecdotally "we found that after the lockdown happened, we shot up with listenership. The reason is, we've been here since 1955 and haven't changed all that much. We're like old reliable."

Ah, but what of the future? None of his adult children (he has three) want to take over the station when he retires although he wants to stick around to finally witness the rebirth of his beloved Main Street.

That may be a while yet. "It'll be the epitaph on my grave," Tria said on a recent "Dawn Patrol." "He waited to see downtown Riverhead revitalized.''

Here are some of the other East End radio stations to check out:

WLNG/92.1, Sag Harbor: Launched in 1963, Sag Harbor's hometown station — which once had a particularly famous penchant for jingles — was perhaps best known for its (jingles-obsessed) DJ/president/GM Paul Sidney who spent 45 years there and bound LNG tightly to community with an obsessive attention to live remotes from around town and a fixation on local news. (He died in 2009.) "It's what's between the music," he'd say — and what was between the music was Sag Harbor itself. There have been lots of other legendary DJs here, while the best known of them, Gary Sapiane, has been at LNG since 1970. The East End powerhouse was bought by former WABC/7 weather forecaster Bill Evans, and his wife Sandra Foschi — owner of a physical therapy practice — in 2018.

WLIR/107.1, Hampton Bays: Not to be confused with the old groundbreaking WLIR of Garden City, this station was in fact founded in 1980 (and later owned by Paul Simon and his brother, Eddie) as WWHB, and sold to Red Apple Media — which is owned by grocery store magnate

John Catsimatidis — last October. Catsimatidis now uses it to retransmit WABC's signal (conservative talk is the format, for the most part, with some music mixed in). . There is, however, some original content while it's now the home of Cousin Brucie.

WEHM/96.9, Water Mill: Lauren Stone is majority owner of this progressive rocker and also host of its midday show. WEHN is not a solo station, but is allied with a pair of important East End sister stations as well — both just down the hall, so to speak: WBAZ/102.5 (adult contemporary) and WBEA/101.7 (top 40) — best known as The Beach. Both also originate from the same studio building on Montauk Highway in Water Mill.

WJJF/94.9, Montauk. Since 2012, Montauk has had its own news/talk station, although WJJF is most closely associated with Fox News (Sean Hannity's show airs here.).

WELJ/104.7, Montauk: This adult contemporary station out of Montauk has a particularly unusual back story: It was bought in 2016 by a pair of college students, Matthew Glaser and Andrew Adams. Both friends from high school (Smithtown), Adams was a senior at SUNY Plattsburgh and Glaser at Stony Brook University when they scratched together the financing to purchase this.

WLIW/88.3, Southampton: WNET purchased this station last year — yes, the same station started out of dorm room at (the now-defunct) Southampton College in 1978 — and now calls itself Long Island's Only Public Radio Station. It's located at 51 Hill Street, next to Southampton's movie theater, where passersby can watch the proceedings. — VERNE GAY