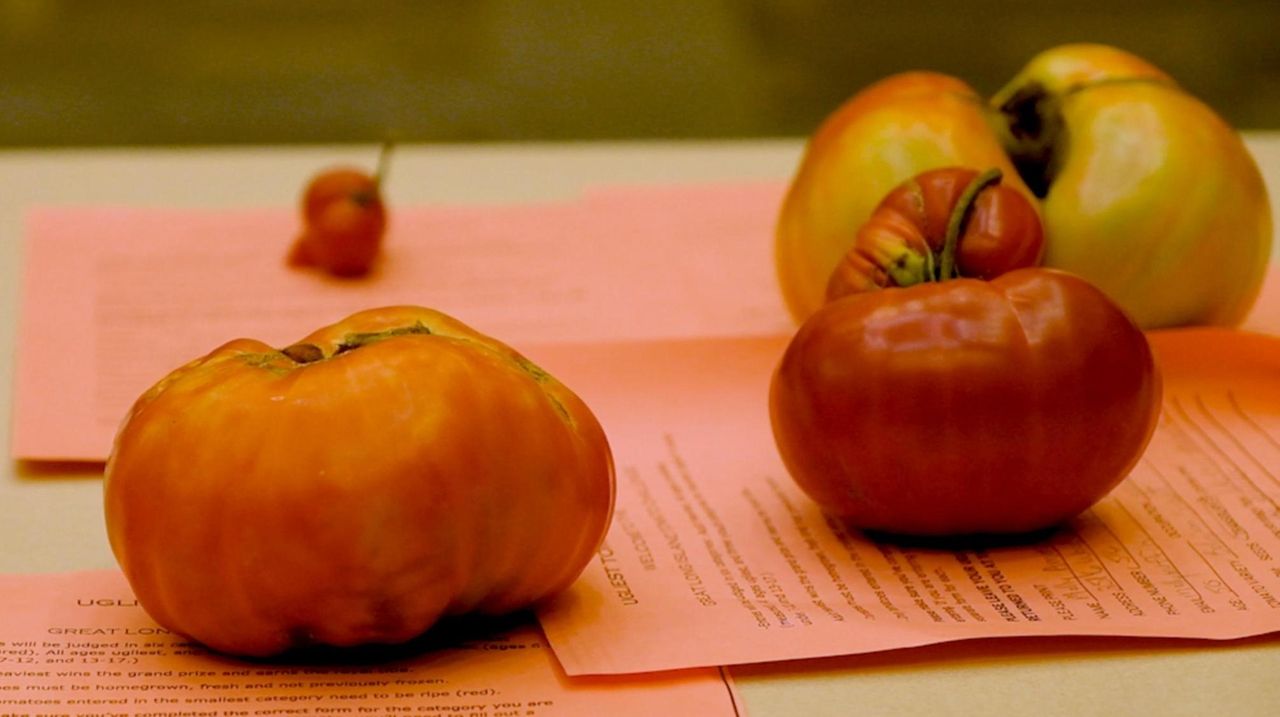 On a frigid day in February, William Bouziotis sowed hundreds of seeds indoors and embarked on a complicated enterprise that involved growing and splicing two types of tomato seedlings together to create a perfect specimen. If you think this sounds like the undertaking of a scientist, you’re right.

Bouziotis, 70, of Northport, is a dentist. Perhaps it’s his medical training that sent him on a quest to improve upon nature. Or maybe he just really likes eating and sharing tomatoes.

On the evening of Aug. 23, on the campus of Farmingdale State College, Bouziotis, who won the Great Long Island Tomato Challenge in 2013, returned to join 75 other avid tomato growers from around the Island for an evening of competition and camaraderie at the 13th annual event.

James Dunn of Northport, Bouziotis’ grandson, was among them. The rising kindergartner has been a lifelong apprentice of his “Pappou,” and it shows. Dunn, just 5½, grew one of Bouziotis’ Big Zarro tomatoes, mainly, he said, because he enjoys eating them in Greek salad. His tomato weighed in at a whopping 2 pounds, 10.5 ounces, earning him first place among children in the kids 6-and-under category.

Bouziotis beamed at his grandson’s victory, of course, but his own tomato was even bigger, weighing in at 3 pounds, 11.5 ounces, and earning Bouziotis first place and the title of Tomato King of 2019.

How did the two-time winner do it? After starting Domingo Beefsteak tomatoes and Estamino rootstock tomatoes from seeds, he cut the main stems of each at a 45-degree angle and joined them, using clips to secure them. Next, he placed them in a dark, humid healing chamber he built from plywood.

“After seven days, I brought them into the light, gradually over two or three days, and then transplanted them into a larger container,” he explained. “Then when it was warm outside, I hardened them off by placing them outside for 15 minutes one day, an hour the next and two to three hours the third day. I filled a wheelbarrow with a mix of one-third each sand, peat moss and composted manure, plus 2 cups of fertilizer and 1 cup of lime. Then I mixed it with a hoe,” he said, and used the mixture to fill 50-gallon buckets, where he planted his seedlings.

How many plants does he grow, exactly? “Since this is a hobby,” Bouziotis explained, “I always graft more than I need. I end up spending about $3,000 a year, and give away about 300 to 350 plants to my friends and patients.”

Evan Gottesman, 14, who’s been attending the challenge for at least six years, took home his first prize when his 1-pound, 6-ounce Big Zac was named top tomato in the kids 13-17 category. The Farmingville teen started his seeds in February and moved his plants outdoors at the end of May, planting them in a homemade soil mix made up of one-third each peat moss, vermiculite and organic potting mix. His grandparents Sal and Jeri Ferrante, of West Islip, who’ve been bringing Gottesman to the challenge for years, praised him for having “persistence that paid off.”

Vincenzo Abbatiello, 8, started his tomatoes from seeds and “put chicken poop in the soil because we have chickens and rabbits,” he divulged. That’s apparently an excellent strategy because his 3-pound, 1-ounce whopper not only earned a rousing round of applause — it earned the Greenlawn third-grader first place in the kids 7-12 category.

Nobody was more surprised at their crop this year than Sandralee Capitain of North Babylon. The “70-something” retiree thought she planted Belgian Giants this year, only to realize her seeds were “mislabeled.” Turning lemons into lemonade, Capitain not only entered her tomato in the Smallest category — but she won! Her morsel of a 'mato measured a mere 14 points on the pica scale, which is used by printers to measure text type, with six picas equal to about an inch.

And Jack Cortelyou’s tomato of unknown variety won notoriety as the ugliest tomato of the evening. The Smithtown resident purchased six starter plants last spring and planted them in 20-gallon tubs buried in the ground. He fertilized and watered regularly, but was disappointed when all the tomatoes “had spines on them.”

He shouldn’t have been so quick to judge, though, because he soon learned beauty is in the eye of the beholder: One of those grotesquely misshapen tomatoes earned him first place in the Ugliest Tomato category.

There’s no final word on which was the tastiest, however, as sampling wasn't part of the evening’s festivities. But Bouziotis already knows what will become of his champion. “I’m going to use it for seed for next year’s tomatoes,” he said. But before doing that, he’s going to “cut some of it into wedges, pour over some olive oil, chopped fresh basil and as much salt as you can tolerate because it takes a lot of salt to bring out the flavor,” he said.

And it takes a lot of tomato growers to keep a community together for 13 years.

Jessica Damiano is a master gardener, gardening coach, author and lecturer who pens Newsday’s weekly Garden Detective column. She spends her free time weeding and struggling to save her lawn from her two dogs.

Scoop: June opening planned for LI's 7th Dairy Queen
Popular breakfast spot to close in Rockville Centre
What to do at the Port Jefferson Ice Festival this weekend
New Tex-Mex spot opens in Wantagh
Didn’t find what you were looking for?