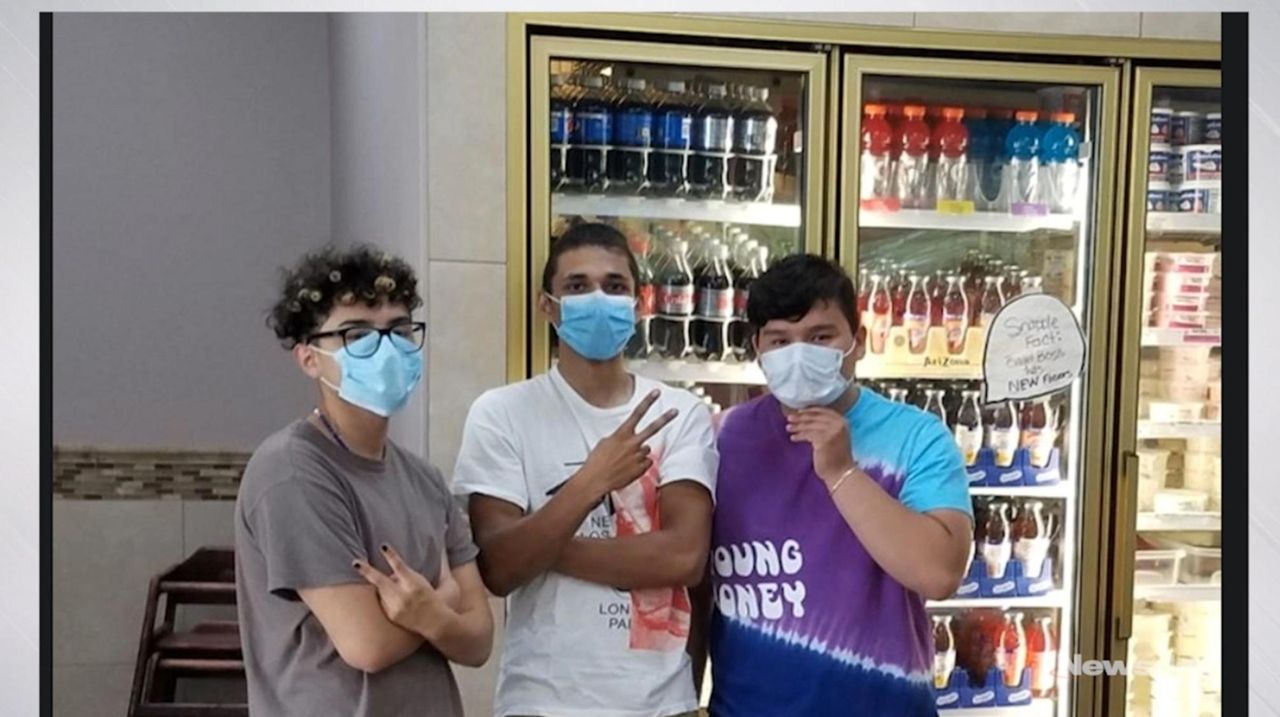 Bagels, coffee and a side of generosity.

That’s what some customers at Bagel Boss in Bay Shore recently received after a teenager began paying for their orders. Celia Vollmer was at the shop two weeks ago, standing in line behind an elderly woman, when confusion took over the store.

The woman was about to hand her credit card over to the cashier to pay for her bagel and coffee when suddenly a teenager pressed forward and presented his credit card.

“I got this,” Diego Agreda said, according to Vollmer, 57. Confusion washed over the woman’s face.

“Why are you doing this?” the woman repeatedly asked as Agreda, 18, continued to push his card toward the cashier.

“It’s just to make your day a little bit better,” Agreda responded, according to Vollmer. “Just pay it forward.”

The woman was in tears, Vollmer said, and began explaining how she is on a limited income. Later the woman told Agreda and his two Brentwood High School classmates at the store, Ashton Ali, 17, and Kevin Vasquez, 19, that her husband was in the hospital and the free meal made her day.

Agreda proceeded to pay for several more orders, Vollmer said, and customers and workers in the store cheered. When she heard the teens were from Brentwood, she approached them. Vollmer is a Brentwood High School graduate who works for the Brentwood library and also does volunteer work with Brentwood youth.

“It just warmed my heart,” Vollmer said, adding that there is a negative perception of Brentwood despite its many success stories. “Here are kids from my community just being so generous with total strangers."

Vollmer took a photo of the teens and posted the story on her Facebook page. The post went viral and has been shared more than 4,700 times.

Buying people food, Agreda said matter of factly, “is what I do.” He said he’s been doing it since he started working at age 14. “Any income that I’ve got, I’ll help people.”

Whether at Taco Bell, McDonald's or even at the grocery store, Agreda said he just wants to offer some assistance.

“You don’t know who’s struggling out there,” he said. “And especially with this pandemic, I’m helping more now.”

Agreda’s classmates said they, too, offer to pay for people’s food.

“Anywhere I go I’ll be a nice civilian and do the good thing and pay for their meal,” Ali said.

Agreda, who is working two jobs currently but has worked as many as four jobs at a time, said “things were not easy” financially at home when he was younger. His parents, he said, taught him the value of giving back.

Agreda’s mother, Giannina, 46, a nurse at Good Samaritan Hospital Medical Center in West Islip, said it’s a lesson she instilled in both word and action, as whenever the family visited her native Ecuador, she would pay for someone’s meal.

“I always told him, you have to treat people the same way you want to be treated,” Giannina Agreda said. Now, she said, “he just does it from his heart.”

Her son, who graduated from high school this week and hopes to join the Air Force later this year, said he has no plans to stop.

“I’m thankful that I’m able to pay for people’s food, I’m able to help others,” Diego Agreda said. “I’m going to keep doing this till God takes me away.”

LI drive-in, outdoor movie and concert schedule for summer
The dish you need at your next summer party
10 events, things to do this weekend on Long Island
Gilchrist's comeback arrives at Tokyo Olympics
New seafood eatery opens with plans to open offshore fish farm
New farmers market opens in Glen Cove
Didn’t find what you were looking for?