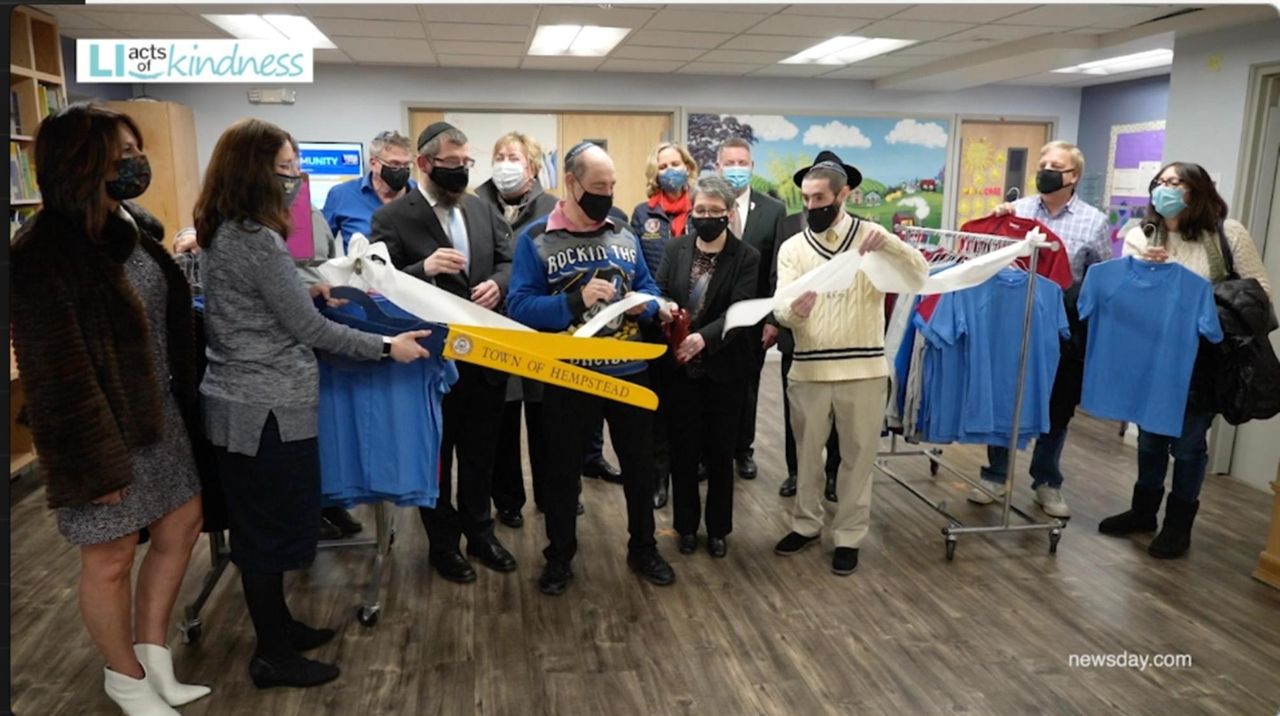 After having a hard time finding specialized clothing during her cancer treatment, Loraine Alderman, along with her husband, Bill Alderman, had the idea to start a clothing bank for breast cancer patients. Credit: Corey Sipkin

Her life changed in a heartbeat.

First, during a weeklong span in May 2019 when Loraine Alderman went from being a woman concerned about possibly having cancer to being a full-fledged cancer patient. Then, within weeks of diagnosis, becoming a breast cancer survivor forced to deal with the host of post-surgical issues that come with having had a double mastectomy.

The chemotherapy? She had known she would face that. And her hair falling out and the need to find a wig? Traumatic, but also a side-effect she had considered.

But the need for a shirt to easily accommodate her post-surgical body? She hadn't thought of that.

Finding those clothes was far from easy. So Merrick residents Loraine, now 59, and husband Bill Alderman, both took action.

The result is "Dress for Recovery," a clothing bank that officially opened Tuesday in connection with the "Circle of Hope" wig bank at the Chabad Center for Jewish Life on Hewlett Avenue in Merrick. There those in recovery can borrow clean, well-cared-for donated outfits, then return them to the center to be cleaned and worn by the next patient.

It is a service available to all, regardless of race, creed, ethnicity, religion.

"Thank you so much for being the light in the darkness," Nassau County Executive Laura Curran said to Loraine Alderman during the opening ceremony Tuesday, adding: "Your story is incredibly inspiring. That you took something that is incredibly difficult and challenging, taking something that is beyond imagining, really, then turning it into something that is a source of hope for other people? Your seeing a need and your filling the need … I'm truly grateful for you being that light."

Alderman said that in preparation for surgery, which took place July 3, 2019, at St. Francis Hospital in Flower Hill, her doctor assigned her a "surgery buddy" — a survivor who'd already gone through the process and understood the pitfalls.

Alderman went from a sonogram on May 20, to biopsies on May 24, results on May 28, the July 3 surgeries and then post-surgical complications, including the need for five blood transfusions, before her release on July 8 — her birthday. What followed were the mental stresses: knowing that if she hadn't had the mastectomies her cancer would've likely progressed to Stage 4 within a year; and knowing there's a small chance that her cancer might still come back.

Then there were the other hurdles.

Losing her hair and having to go to the wig bank? "It's very emotional," she said. Though, she found that volunteers at the Chabad Center, headed by Rabbi Shimon Kramer and his wife, Chana Kramer, the Rebbetzin who also serves as program director, made it as simple as possible. But the clothes? Alderman found there was nowhere, except online, to get specialized clothes.

Although there are dozens of wig banks, shirts that have special frontal openings with inner pocket linings are available only online — and can cost $45 or more each.

"There's no stores in New York that sell them," Alderman said. "You have to go online. They're expensive. There's no way to try them on, determine your size, see how they fit. … There were no clothes banks."

Seeing that the Chabad Center, a nonprofit 501 (c)(3) project of Maimonides Educational Center, had its established wig bank, Alderman and her husband approached them about a clothing bank and Dress for Recovery was added.

"Being diagnosed with a major illness, cancer, is devastating to begin with," Bill Alderman said. "Along the way you have major stress, major angst … Then, they tell you have to get this special clothing because you need snaps or buttons that are easy to open, because you have drains that need to be emptied, that you have to wear, that sometimes they leak a little … My wife is a really smart person and she put 2 and 3 together and came up with 5. She saw this was the missing piece of the puzzle."

The Aldermans acquired the initial clothing donation with the help of friends who had a manufacturer in Thailand. Another friend donated more than $2,000 to help fund the purchase of additional clothes and such items as padded seat belt protectors and heart-shaped pillows that can be used to store ice packs needed to reduce post-surgical swelling.

They also reached an agreement with a dry cleaner, which offered to professionally clean all the lent clothing at no charge — so it can be restocked for loan to the next patient.

"My dream for the future is there will be no more cancer of any kind," Loraine Alderman said at the opening ceremony. "Until that time, I hope that clothing banks become as available as wig banks are for people needing wigs. … The first of these banks had to start somewhere. This is the start of clothing banks."

For information on how to schedule a clothing appointment, or about the Circle of Hope, Dress for Recovery and the Chabad Center, email CircleOfHope@ChabadJewishLife.org or call 516-833-3057.