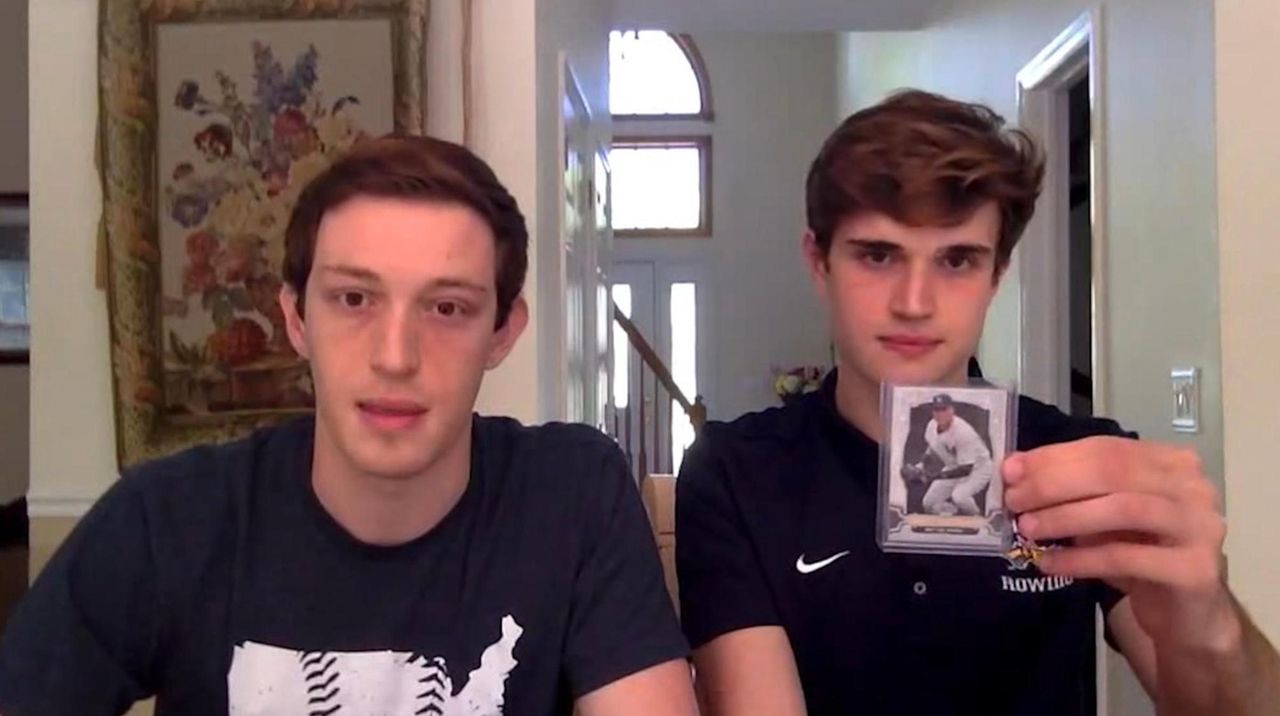 When William Manolarakis was 12, he came across a Hideki Matsui baseball card — and it was a game changer.

“I remember thinking that it was the coolest thing in the world,” he said, “that he was on the screen and he was right there in my hands.”

His younger brother, Alexander Manolarakis, soon followed suit, and the boys started collecting any baseball cards they could get their hands on. They estimate that the collection in their Fort Salonga home totals roughly 10,000 cards. It “stretches across all of Major League Baseball” in terms of teams and players of past and present, William said.

Now, the brothers are auctioning them off for a good cause.

William and Alexander Manolarakis, 22 and 19 respectively, were inspired by the charity work of Boston Red Sox beat reporter Chris Cotillo. On Twitter, he raised more than $57,000 by auctioning off his baseball cards and autographs, benefiting more than 35 charities, including The Greater Boston Food Bank.

William said he got in touch with Cotillo and asked how he did it.

“We modeled our efforts based upon his practices,” William said. “And we wanted to bring it to New York to support local organizations, as well.”

Like Cotillo, the brothers run their efforts solely through Twitter. With their account @CardsforCOVID, they tweet a photo of the baseball card with a description, note the closing time of the auction, name their starting bid and which charity the proceeds will benefit.

Anyone can reply to the tweet with their bid, and when the auction closes, the brothers message the winner directly. William said the buyer must donate to the listed charity and send the brothers their donation receipt before they mail them the baseball card.

As of Thursday, the brothers had raised more than $3,600 — in 15 days. The money has supported the Long Island Cares and Island Harvest food banks and Little Shelter Animal Rescue and Adoption Center in Huntington, along with New York-Presbyterian Hospital COVID-19 Relief Fund, William said.

They've have also taken their efforts outside of New York.

William added that they have an extensive spreadsheet to keep track of all of the auctions, bidders and where the money was donated. The planning alone took “weeks” in April, and the brothers launched the initiative in May.

"The whole process has made us feel better during this whole pandemic," said Alexander, "by being able to give to others and donate."

At some point, the brothers will have to halt their efforts to return to school. William is in his third year at the University of Pennsylvania School of Dental Medicine, and Alexander is in his first year at Drexel University as a pre-dental biology major. William said COVID-19 relief is especially important to them as health care workers in training.

Until they return to their studies, they plan to keep the auctions going.

“It’s been breathtaking to see how people have been coming together from across the country to support something like this,” William said. “We had low expectations and didn’t have a clue that this would grow into such an exciting and truly supportive initiative.”

The brothers are making a dent in their vast collection — so far, they’ve mailed out about 100 cards. Of course, there’s sentimental value attached, so some of them have been tough to part with.

For example, one of Alexander's first jersey cards was that of David Ortiz, who played primarily for the Boston Red Sox. Under normal circumstances, the card would go for anywhere between $5 and $10 at auction, according to Brian Drucker, owner of Cow Over The Moon Toys and Sports Memorabilia in Huntington.

The brothers sold it for $150 to benefit Brigham and Women's Hospital in Boston.

“It was one of my favorites," Alexander said. "But the man on the receiving end said it was for his daughter’s birthday and she’s a big Red Sox fan. So I’m sure she was happy to receive that.”

William pointed out that he and his brother are, in fact, New York Yankees fans.

“We’re bridging two very distinct groups: Yankees and Red Sox fans,” he said. “Especially through these efforts, I feel like if we can come together during this time, anyone can.”

1:03
A cherry blossom festival blooms in Greenport
1:03
Cherry Blossom Festival opens in Greenport
Mother's Day celebrations on LI, more things to do this weekend
The boozy ice pops you need to try this summer
6:10
An accident almost derailed her baking career. Now her cake shop is a runaway success
LI drive-in movie, concert schedule for the spring and summer
Didn’t find what you were looking for?