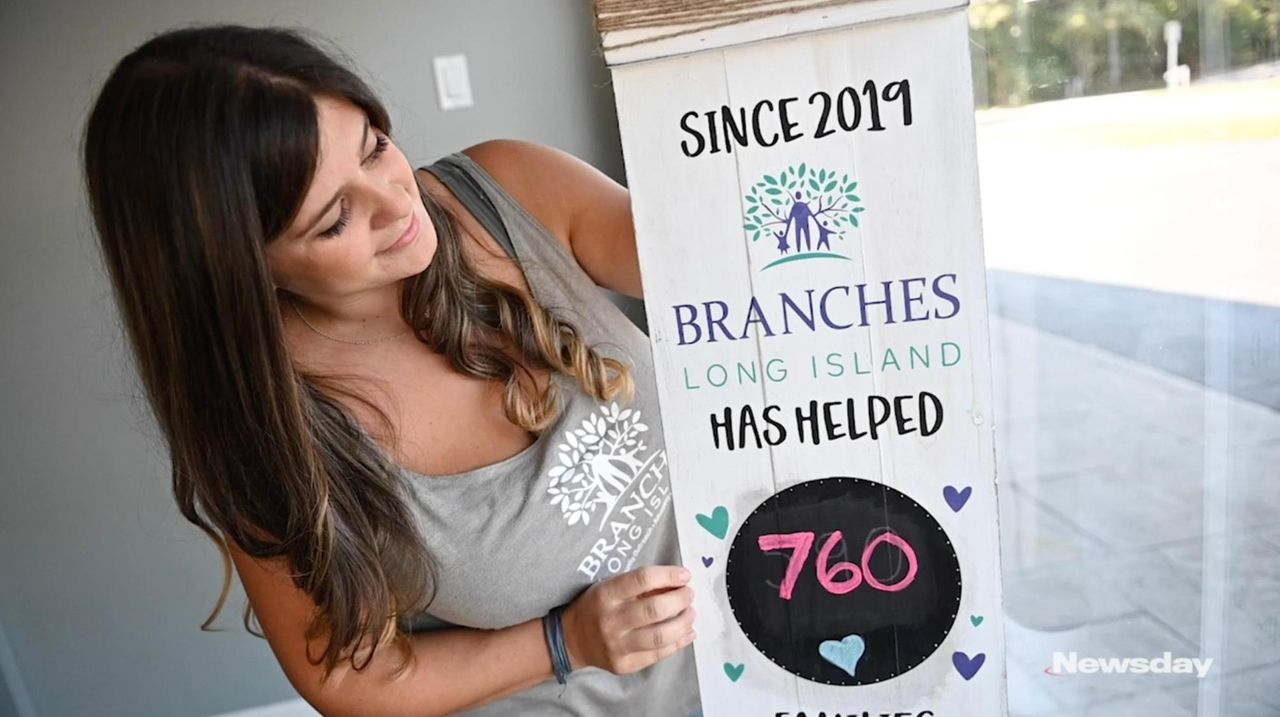 Samantha Morales of Coram started her nonprofit Branches Long Island in October 2019. She went from filling her hallways and children's bedrooms with donations to obtaining her own office space in Middle Island in May, amid the coronavirus pandemic. Credit: Newsday / Steve Pfost

When Samantha Morales started her nonprofit organization, her Coram home became headquarters. The hallways and her children’s bedrooms were often filled with food and supply donations.

Nearly a year later, Morales’ organization is now run out of an office in Middle Island, and she’s helping more Long Islanders than ever before. "It’s everything I ever dreamed it would be," she said.

Branches Long Island is a 501c3 nonprofit organization, run by Morales and an executive board of seven women. With donations (and their own purchases), the volunteers provide food, toiletries, pet food and baby supplies to families that reach out for help, Morales said.

They call these bundles of essential items "blessing boxes." Anyone in need can fill out a form on the organization’s website, and then either pick it up at the Middle Island headquarters or have it delivered by a volunteer. The volunteers have also offered assistance in domestic violence and homeless shelters, Morales said, adding, "There really is no end to what we do."

Morales was a veterinary technician before pivoting to her nonprofit efforts and a side crafting business full time. She’s always been passionate about helping others, and was an active member of several community Facebook groups before wanting to start her own.

But she felt strongly about gauging the interest of her network first, many of whom are involved in animal rescue.

"I posted something on Facebook and got an amazing response," Morales said. "I had people vote on a name and we picked a logo together."

Branches Long Island was founded in October 2019. "We started pre-pandemic," said Morales. "We used to function out of my shed in the backyard, and the girls and I were out in the driveway packing food boxes."

The members of the executive board live all over Long Island — they only came together because of Morales’ Facebook post. Now, the Branches Long Island community Facebook group has more than 5,600 members, and they expanded into their Middle Island space in May.

Jennifer Aviles, the organization's vice president, remembers seeing the post and immediately wanting to work with Morales. "We just mesh; it’s crazy how well we work together," she said.

Aviles, who was born in Colombia and lives in Brentwood, is bilingual. She provides services for Long Islanders in need in Spanish, and translated the "blessing box" request form for their website.

"We’re able to help pretty much any family," she said. "We never really turn anybody down."

Executive board member Stephanie Gennett, of Farmingville, helps with community outreach by sending out fliers to supermarkets and banks all over Long Island. She also volunteers at the center weekly.

"At the beginning of COVID, a lot of senior citizens were coming in whose food stamps or Social Security couldn't make it to the end of month," Gennett said. "They would walk in looking for help and it was sad because of all the price gouging going on; they couldn't find certain things like toilet paper."

Morales said the pandemic threw their efforts into "overdrive." And now they’re facing another busy time of year: the holiday season. Branches Long Island is collecting donations for its Thanksgiving drive. The goal is to provide a turkey to each family that reaches out for the drive, Aviles said. Morales said that so far, the group is gathering Thanksgiving items for more than 200 families.

Pretty soon, the volunteers will be heading into their "Christmas push," assisting families in need with gift donations and essentials. Morales said that during the pandemic, she was able to "establish roots" on Long Island.

"People drive by and they know us," she said. "Although we get a lot of support, we also get a lot of requests for help." Morales added that anyone can reach out anytime, even anonymously.

Having a space for Branches Long Island has brought the volunteers even closer to the people they help — not just physically.

"I try to make my center very homelike and easygoing," she said. "You walk in and we’re your friends, your family. I wouldn't want anyone to feel embarrassed asking for this help."

30+ festivals and carnivals happening on LI this fall
Halloween dinner made easy: Spaghetti with 'eyeballs'
Halal chain opens second LI location, in Commack
Have eyeballs and bones in your dinner at this Halloween pop-up
LI drive-in, outdoor movie and concert schedule for fall
5:11
15 Halloween events, things to do this weekend on Long Island
Didn’t find what you were looking for?