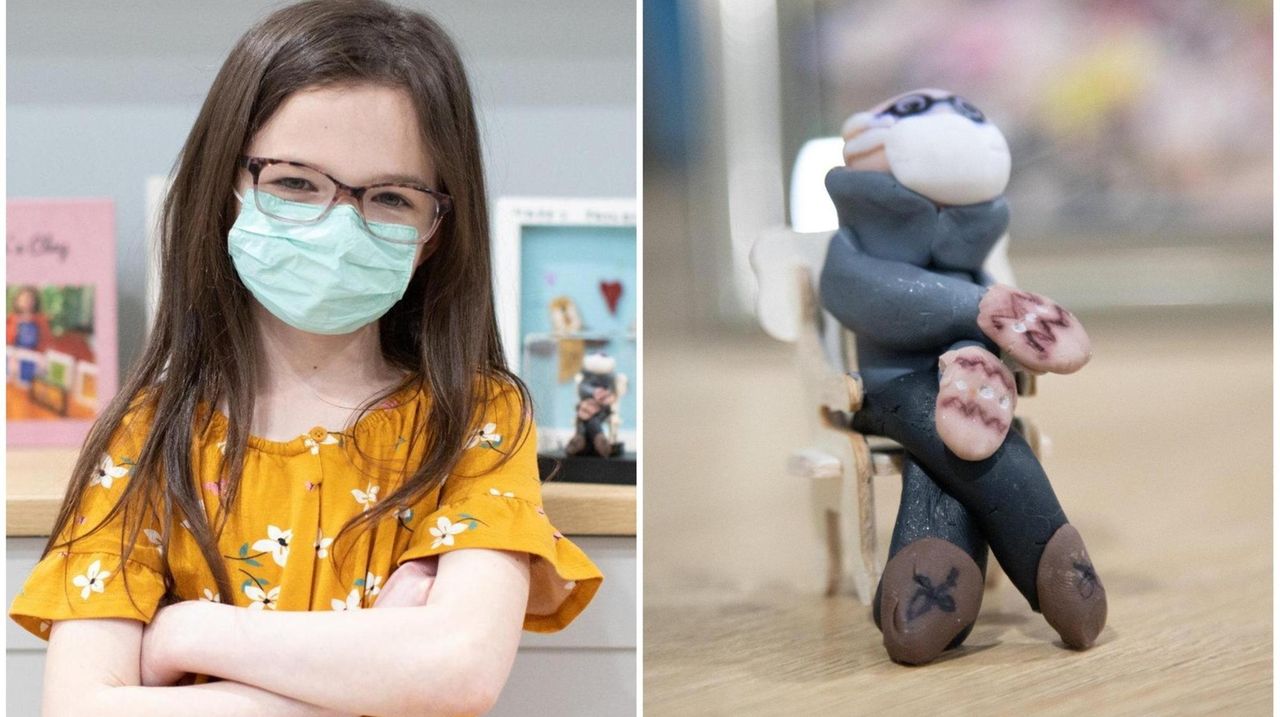 Nine-year-old Julianna Tand raised $3,005 for the Ronald McDonald House when she raffled off a clay replica that she made of the Bernie Sanders inauguration meme. Credit: Kendall Rodriguez

A wedding more than 40 years ago led to a 6-year-old granddaughter’s handmade present, which sparked a business and gave rise to a clay figure of Vermont Sen. Bernie Sanders in his mittens, which ended up raising more than $3,000 for the Ronald McDonald House on Long Island.

The chain of events took off after Julianna Tand, now 9, of Merrick, made her maternal grandparents a set of clay figures in a shadow box for their 40th wedding anniversary in October 2018. She dressed her grandparents in a wedding gown and tuxedo, working from a photograph of their wedding day, but added members of the current extended family as well, including her mother, father, and twin brother Brandon.

Julianna’s mother, Jennifer Tand, 37, an elementary school teacher, thought it was so cute that she posted it on her Facebook page. "People started saying, ‘Can you make this for my family?’ I said ‘Sure’ and I kept doing it," Julianna says.

She charged $8 per figure in a sculpture, making them from Sculpey Oven-Bake Clay in her basement craft room. The first year she raised $200, according to her mother, and used the money to buy toys for Christmas to donate to charity. In 2019, she raised $500, and in 2020, $700, using that money to buy holiday gifts for the Ronald McDonald House in New Hyde Park, Jennifer says, where she and her daughter had volunteered to bake for the families that stay there while their children are being treated at Cohen Children’s Medical Center.

And then came Bernie Sanders.

After the inauguration of President Joseph R. Biden in January, Julianna says she noticed that the photo of Sanders sitting in his mittens went viral, and so she made a miniature clay figure of him for herself. She showed him to her mother. "I said, ‘You could sell him,’" Jennifer says. "She said, ‘I’m never going to sell him. He’s just a cute little man.'"

But a few days later, the third-grader told her mother that she’d had a change of heart. "I think it would be better to raise money with him than to keep him," she says she told her mother.

"I decided I wanted to do a raffle because I would get to raise more money that way," Julianna says. So the Tands turned to Facebook again to run a 10-day raffle of the 2 ¼-inch figure with chances costing $20 each. The chances she sold plus donations people made to up her earnings has totaled more than $3,000.

ONE OF A KIND

"She’s taken us all by surprise in such an awesome way," says Matthew Campo, CEO of Ronald McDonald Charities — New York Metro. "I’m always amazed at the power of kids." Campo is planning to meet with Julianna as she presents her donation, which Campo says will be used to provide dinner meals for families staying at the house so they don’t have to worry about food after long days at the hospital. During the pandemic, volunteer groups that would typically provide the dinners can’t cook at the house, so that’s been an area of need, he says.

Julianna’s grandmother, Debbie Viola, 62, a decorative painter from Massapequa Park, says she is proud that her granddaughter’s gift to her and her husband, Joe, 64, who is retired, set in motion the fundraising success. Julianna had originally hoped to earn $500 with her raffle. "I don’t even know if she realizes how much $3,000 is," Viola says.

Michelle McKenna, 59, of Long Beach, a teacher who works with Julianna’s mother, was the winner of the figurine. It’s not that she is a big Bernie Sanders fan, she says, she just wanted to support Julianna’s endeavors, so she bought several chances. "This little girl is thinking of others at such a young age," she says.

McKenna plans to keep Sanders in a plastic case, holding the sculpture for Julianna to take back when she grows up. She had Julianna sign and date the back of the figure. "When she’s famous, she can have it and put it in a museum," McKenna says.

Now Julianna has hopes of raffling off different clay figures every month to raise more money. She’s working on figures of health care workers in masks for the next one.

Will she be making another Bernie?

"No," Julianna says. "Because he was just special."