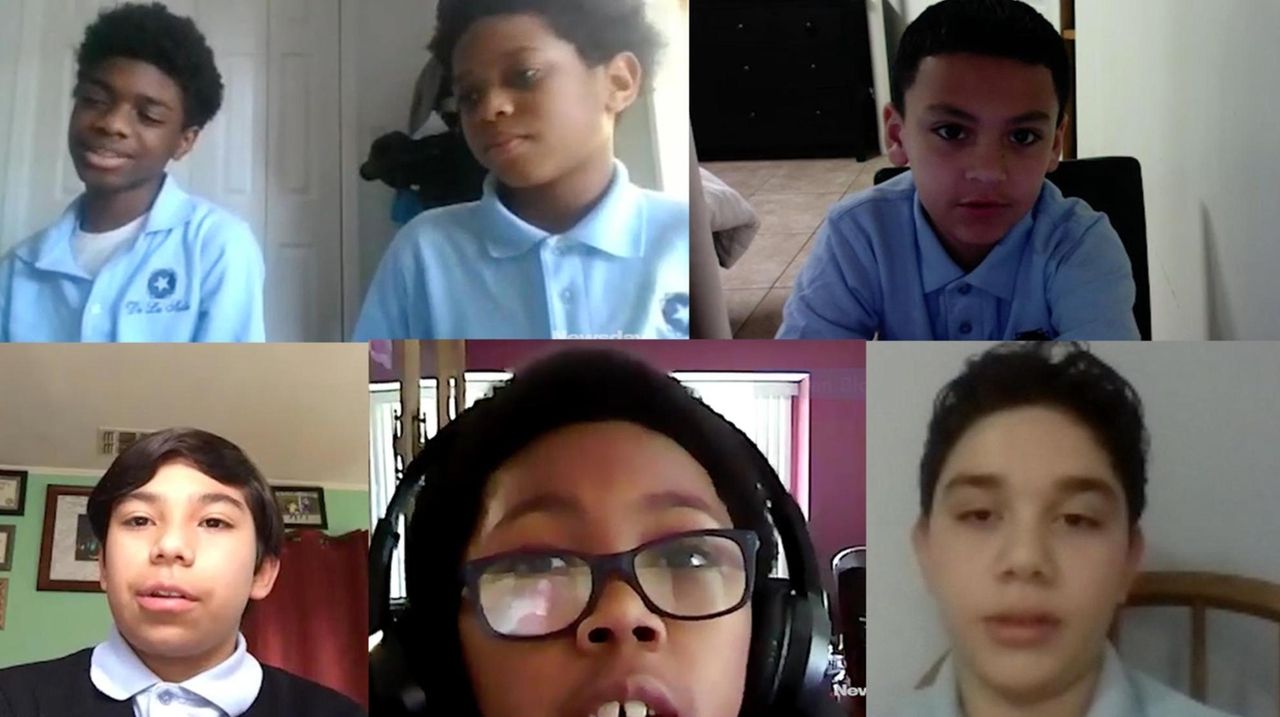 Students of The De La Salle School in Freeport describe the letters they've been writing to COVID-19 patients at Mount Sinai South Nassau hospital in Oceanside.

When fifth-grader Quran Blount isn’t attending his virtual classes or doing homework, “I just ride my bike and I play outside with my friends, but we play games that don't require too much touching, like passing the football,” he said.

The severity of the coronavirus outbreak and the need to social distance isn’t lost on Quran or his fellow classmates. He and many other students of The De La Salle School in Freeport have been writing letters and sending them to Mount Sinai South Nassau hospital in Oceanside.

The De La Salle School is a Catholic middle school, serving boys in grades 5 through 8 who may come from economically disadvantaged circumstances. Principal Jeanmarie Becker said her students have been sending letters to the hospital for four weeks now, with 64 letters written so far.

Many students wrote letters to patients battling COVID-19, but some also wanted to acknowledge the front-line heroes.

“They wrote many letters to nurses as well, the health care professionals in the hospital, so I think they were trying to reach as many people to give them support and to let them know they were thinking of them and to make them smile on a day maybe that they weren't smiling,” Becker said.

Julian Ramirez, who is in fifth grade, says he hopes the letters also encourage hospital patients. "We can help them and they can be inspired to fight their sickness and the virus," he said.

Seventh-grader Anthony Ulloa said he knew there were many Hispanic patients in the hospital whose families couldn’t visit them, so he decided to write his letter in Spanish. Becker provided an English translation for the hospital, as well. Anthony said he wanted “to show there is somebody thinking of them.”

His letter starts with: “Dear Patient, I know that in these difficult times we are going through, we sometimes believe that there is no good thing in this world. Today I am writing to you that in this difficult time, there are good things in the world.”

Brothers Noah and Nasir Wilkerson, who are in fifth and seventh grade, respectively, wrote their letters together at home.

“I just really wanted people to feel better and to know that they’re not alone in the hospital and we’re right there next to them, even though we’re not there in person,” Noah said.

Nasir added, “I wrote [about] how when they get out of the hospital, they’ll have family and friends waiting for them and how they have to keep fighting their battle so they can be happy when they recover.”

Noah really wasn’t expecting the virus to spread this much. “I want things to just go back to normal because it’s not really how I imagined,” he said.

Several students said they’ve been praying for the victims of COVID-19, and hope there is a vaccine around the corner. Eighth-grader Jeffrey Lemus wrote in his letter: “I pray that doctors and scientists can find a cure.”

In the meantime, Jeffrey said, families should still support each other from a distance and not hesitate to reach out to each other for help.

“We can start doing virtual chats with family members and stay in contact with family so you can both comfort each other if one of you is feeling scared or anxious,” he said.

Becker said her students will continue writing letters for the hospital, which are being printed out and given to patients and posted on bulletin boards for hospital staff.

There’s another way to help this cause besides sending well-wishes, Anthony said.

“I can help my community by staying home because I don’t want the virus to spread,” he said. “We’re all heroes by just staying home.”

Try something new: Recent LI restaurant openings
LI drive-in movie, concert schedule for the spring and summer
Where to watch sailing races, regattas on LI
Why Sayville may be LI's next 'it' restaurant destination
0:57
Chef at Organic Corner in Massapequa talks vegan eats
3:17
6 tips for shopping restaurant supply stores
Didn’t find what you were looking for?