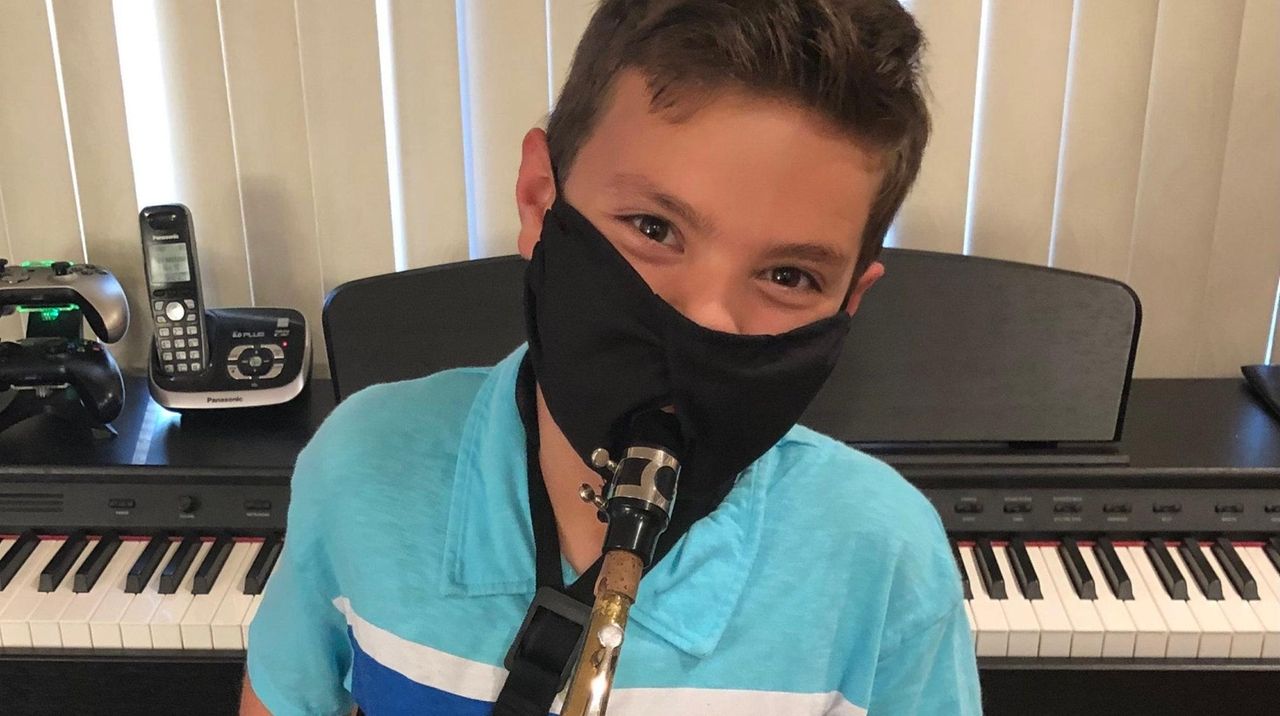 Debbie Parker, of Coram, has made 200 masks specifically for performers. There are three types: masks for singers, flute players and woodwind and brass players. Credit: Newsday / Steve Pfost

Debbie Parker knows that a pandemic shouldn’t stop performers from getting on stage, even from behind masks.

The Coram resident wanted to find a way for musicians to sing and play their instruments as safely as possible, without having to remove their masks during the pandemic, or try to sing with a mask against their faces for long periods.

Her children graduated from the Middle Country Central School District, and she wanted to help out as students started heading back to school.

So, Parker started making what she calls "melodie masks." They’re designed with singers in mind — there’s plastic built into two layers of cotton fabric, so the mask arches out and away from the mouth and wraps around the jaw.

"I’ve always advocated for music and the arts in this district for years," Parker said. "This was my way of saying we can still have music and have it be a little bit safer."

Parker said the masks aren’t just for singers — they can also benefit teachers, who are on their feet and speaking to students for hours a day. The masks also have adjustable ear loops and bendable nose ridges.

"When you inhale, you don’t feel like you’re sucking in your mask," Parker said. "It conforms below the chin, so when they’re singing, the mask goes below their jaw."

Parker made these masks using a pattern she found online, but said it took about three trial runs to figure out the design and materials she liked best. She joined a Facebook group called Masks for Performers, where thousands of people across the country share design tips and post whenever they’re in need of masks.

Because of the group, so far Parker said she’s sold masks to musicians in New Jersey, Minnesota, Connecticut and Buffalo.

It wasn’t long before Parker, who is friends with some music teachers, was asked about masks for instrumentalists.

"Some parents were saying their kids lift up their masks to play every day," she said.

So Parker took to another Facebook community she’s an avid member of: the Middle Country Moms Group. Alicia DeRosalia, of Selden, had posted in the group to inquire about a mask for her son, Justin, 12, who plays alto saxophone.

Parker and DeRosalia connected, and Parker invited them to her home so Justin could be the "guinea pig" for a new mask pattern she was working on, DeRosalia said.

With the help of the Masks for Performers group, Parker made a mask with two overlapping pieces of fabric on it, so a musician can fit the mouthpiece of their instrument inside without removing the mask. Parker said the mask works for woodwind and brass instruments.

She’s also since created her own pattern for flute players, with an extra layer of fabric that the musician can fit the flute through to play.

DeRosalia said her son "just goes with the flow" when it comes to the new mask-wearing and social distancing guidelines in school. "It works really well," she said of the mask. "He’s able to play with it on."

Justin loves music — he’s been playing saxophone about three years, and has been selected for the SCMEA All-County Festival three times. He’s also a member of jazz band and takes piano lessons outside of school.

But with cancellations of concerts and the last SCMEA festival, DeRosalia said it’s been a disheartening time for performers.

"It’s been kind of disappointing during this time because Justin does love music so much," DeRosalia said. "It’s been disappointing he hasn't been able to do more with it."

So if wearing a mask is what it takes to play, DeRosalia said her son is fine with it.

Parker said she’s made about 200 masks so far. And she plans to keep going, as long as the music keeps playing.