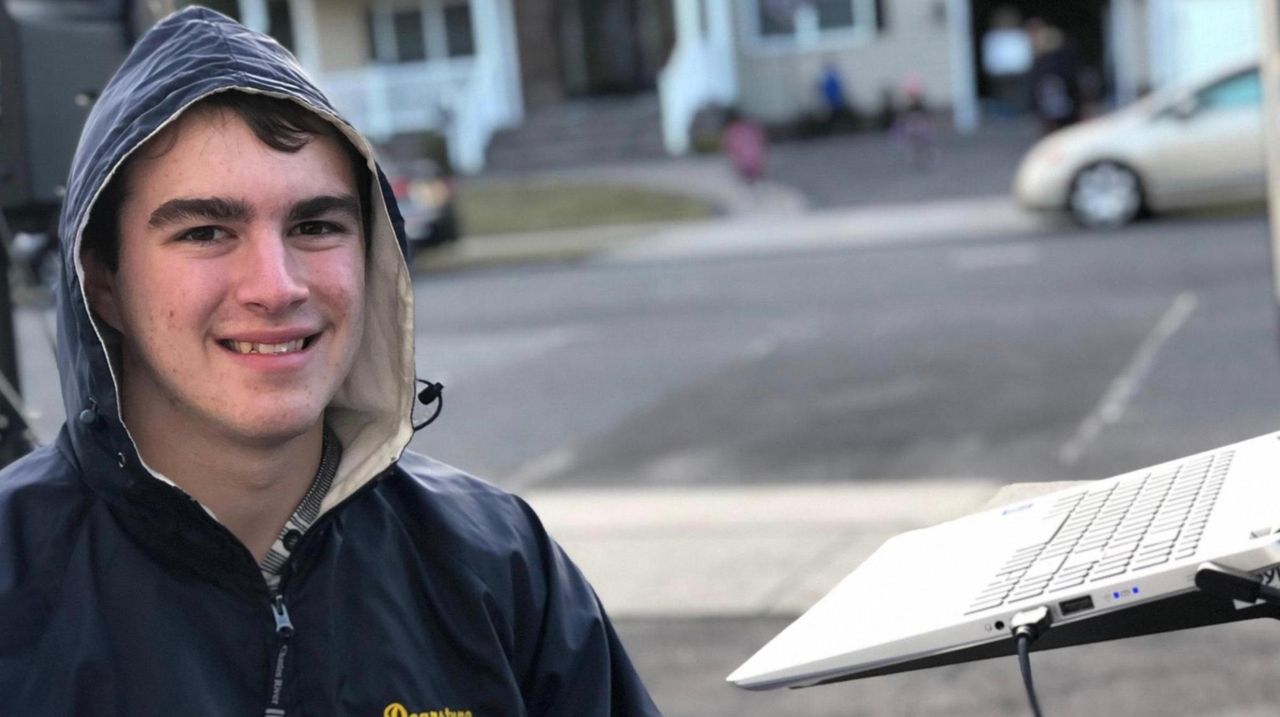 Harrison is on the autism spectrum. Every Friday evening, he hosts DJ sets from his driveway for an hour and a half, creating playlists of his favorite songs and also taking requests from neighbors. Credit: Newsday staff: Photo credit: Martina Dearstyne

Martina Dearstyne says her son, Harrison, uses music as a way to connect with people.

He’s great at it, too — “He’s a bit of a savant,” said Dearstyne, of Massapequa Park. “He’s got perfect pitch. He touched all the keys on a piano at 8 years old without saying a word, and started playing parts of classical music he heard growing up.”

Now 19, Harrison has found his musical niche. Last year, his parents enrolled him in DJ classes at Caffeine Academy, a music school in West Babylon. He learned skills including mixing, looping and live performance using a turntable. Since then he’s performed DJ sets at local events and parties, free of charge.

“He surprisingly picked it up very quickly,” his mother said.

Harrison is on the autism spectrum. His mother says although he doesn’t talk very much, he’s found a way to bring his neighbors together at a social distance. Every Friday evening, Harrison hosts DJ sets from his driveway for an hour and a half. He creates playlists of his own favorite songs and also takes requests.

Dearstyne checked with her neighbors first, and said they were excited for Harrison’s first performance.

She calls it a “block party setting, adapted for this time.”

For his DJ sets, Harrison uses a laptop, a turntable and speakers. He plays upbeat tunes including “Shake It Off” by Taylor Swift and “Cha Cha Slide” by DJ Casper. He noted that his favorite song at the moment is “Circles” by Post Malone.

Dearstyne said there are a lot of children who live on their block, and they “really seem to like” the weekly shows. And Harrison does, too.

“He loves to see people smile,” she said. “We’re just thrilled it has given him a purpose and a way to make others happy. It’s also giving him some normalcy.”

Harrison is still in high school, and for now he’s completing his schoolwork online as well as taking virtual yoga, music and art classes. His mother says he looks forward to the DJ sets — they always put him in a good mood, especially when his neighbors applaud and thank him at the end.

“When he does this, my husband and I are just beaming because this is something he can do for others,” Dearstyne said. “I’m very proud of him.”

Harrison added, "I like DJing because it makes people happy."

Ruth's Chris Steak House to open two locations on LI
New food market promotes East End bounty, interest in local food
How to make classic French onion soup
Kickstart the holidays with these events happening on LI
10 events, things to do this weekend on Long Island
LI restaurants open for Christmas, Christmas Eve
Didn’t find what you were looking for?