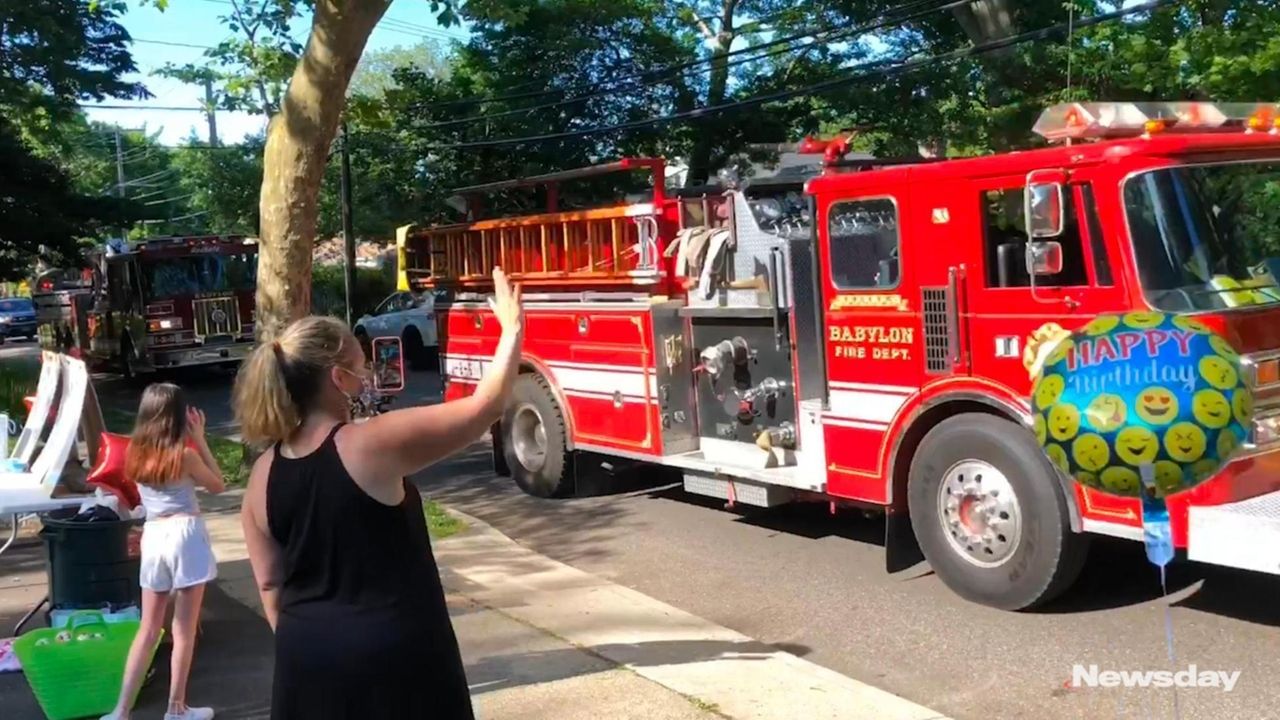 Kate Garvey, 12, of Babylon, asked for food donations to help others for her birthday. Along with her twin siblings Sam and Eloise, 10, they have collected 8,000 pounds of donated food from their driveway. Credit: Newsday / Keldy Ortiz

For her 12th birthday, a Babylon Village girl didn’t celebrate with a cake, but instead received canned beans, pasta, cereal and other food items to donate to others during the coronavirus pandemic.

Kate Garvey said she and her 10-year-old twin siblings, Sam and Eloise sat around the dinner table in mid-March thinking of ways to help. Together they came up with the idea of setting up a food donation dropoff outside their home on Little East Neck Road South.

Since March 27 the Garvey siblings’ home has become the place to drop off food donations. As of Friday they had collected 8,000 pounds of donated food.

“Some people would come multiple times a week,” said Kate, who finished the sixth grade at West Babylon Junior High School. “We want people to feed themselves and their families.”

On Friday, Kate got a birthday parade. Friends, teachers and even strangers stopped by in cars and fire trucks, wished her happy birthday and dropped off food, all while maintaining social distance. She got the idea from her twin siblings, who had a family friend set up a car parade for them to celebrate on May 5, Giving Tuesday, because they were not able to celebrate their March 15 birthday since the pandemic was ramping up.

“We try to encourage people and help by giving food,” said Sam, who along with his sister Eloise completed the fourth grade at John F. Kennedy Elementary School in West Babylon.

Three times a week, the Garvey siblings with their parents would drop off items at the food pantries at St. Joseph’s Roman Catholic Church and First Presbyterian Church, which are both in Babylon. There, the amount of food donated would get weighed.

By early April, the siblings received 2,000 pounds of food, said their mother Bethney Ruggiero, 50, who has kept tabs on a spreadsheet. On May 5, they accumulated 2,000 pounds.

Ruggiero said they got the word out to others through social media to donate, but it helps they live on a busy road.

“Even when we don’t have our sign out, people would leave food on our doorstep,” said Ruggeiro, who owns an event production company in Manhattan called Strategic Event Design. “So many people have been inspired and it’s great to see.”

Pattie Zullo, 56, of Ronkonkoma, said she has known the Garvey siblings since they were infants. The work they’ve done is no surprise to her.

“They’re very selfless kids,” she said. “This is very unsettling times, but these donations help people.”

“There’s proud moments as a parent ... There’s nothing like this,” said Garvey, a school counselor in the Westhampton Beach School District. “It’s community bonding. A guy who was making a pizza delivery stopped by and gave us his tip money.”

The Garvey siblings said they plan to continue donating.