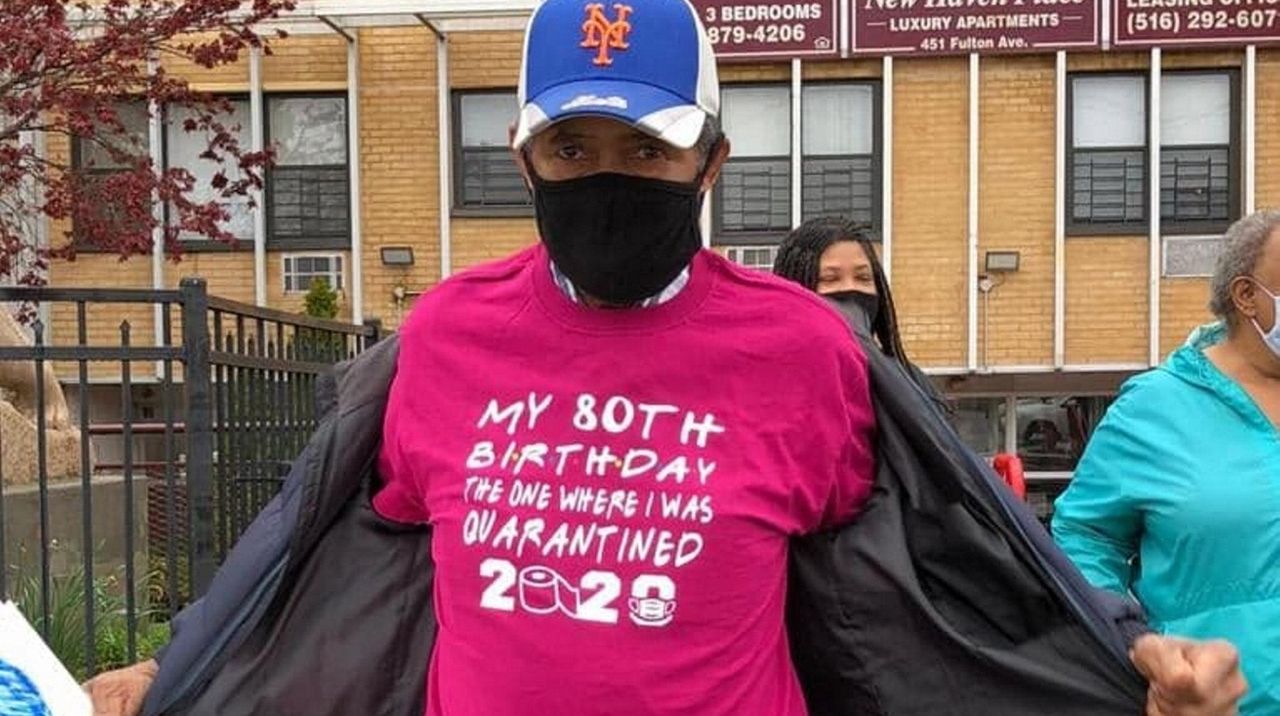 Elbert Wilder, who has worked at the Friedberg Jewish Community Center in Lynrbook for more than 40 years, was honored with a birthday parade on May 1, as 75 cars of colleagues and friends showed up, along with eight fire engines, for his 80th birthday. Credit: Allison Fixler

Elbert Wilder, 80, is a custodian at the Friedberg Jewish Community Center school in Lynbrook, but he does much more than cleaning and maintenance.

Colleagues say Wilder walks staff members to and from their cars in the parking lot every day. He always offers to carry anything particularly heavy, and will approach you if he sees you trying to do it yourself. And he bonds with all of the children in the nursery school, listening patiently with a smile whenever they run up to him in the hallway to tell long-winded stories about their day.

Wilder has been doing all of this and more at the Friedberg JCC, and previously Temple Am Echad in Lynbrook, for more than 40 years.

Karin Ponsiek, assistant to the director of the Friedberg JCC, has been working with Wilder for 28 of those years. Every year on May 1, the staff gets together to throw him a birthday celebration.

But this year was a big one — Wilder’s 80th birthday.

“We always had a cake and lit candles for him, and everyone sang to him,” Ponsiek said. “We’ve continued that tradition all these years, and before the pandemic, we had already been making plans for how we could make his birthday special for him.”

Ponsiek and Allison Fixler, the Friedberg JCC director, still wanted to go all-out to show their appreciation for Wilder and celebrate at a safe distance. They organized a birthday parade outside his Hempstead home, including 75 cars of friends and colleagues and eight fire engines. The staff managed to keep it a secret.

When the big day came, Wilder’s daughter, Crystal, helped set the scene for the surprise.

Wilder said, “My daughter went downstairs and she came back upstairs with a T-shirt, and she told me to put it on and come downstairs.”

When Wilder went downstairs, he couldn’t believe his eyes. The street was filled with beeping cars and familiar, friendly faces of Friedberg JCC teachers, temple members and their children.

“You could see the happiness radiating from him behind his mask,” Ponsiek said.

One by one, cars pulled up and colleagues wished Wilder a happy birthday. They handed him balloons, handmade signs and a cake.

Wilder’s partner, Gail Fleming, said it was hard keeping the celebration a secret, but the payoff was worth it.

“He was just so surprised and elated,” Fleming said. “He didn’t think he was going to have anything special for his birthday, so he was really appreciative that they thought about him like that.”

With most of the Friedberg JCC school staff working from home and conducting virtual lessons, Ponsiek said the drive-by celebration doubled as a reunion.

“Along with making Elbert happy, it gave everybody a sense of purpose at this point in time, and it was good to check in and make sure everyone else was well, too,” she said.

Wilder has cherished his time with his colleagues over the past 40 years. To him, it’s more than work: “Everybody gets along like family.”

And he’s been keeping in touch with that family since the pandemic began. Ponsiek said he calls current and former employees every day to check in. He always has the latest information on their well-being and whereabouts.

“I told him he should write a newspaper to keep us all abreast,” Ponsiek said with a laugh.

Wilder said what he misses most about his job is seeing the kids. The nursery school serves children from 6 weeks to 5 years old. But until he can get back to work, he has memories that will last him a lifetime.

“It was a birthday I’ll never forget,” Wilder said.

6:10
An accident almost derailed her baking career. Now her cake shop is a runaway success
LI drive-in movie, concert schedule for the spring and summer
Mother's Day celebrations on LI, more things to do this weekend
Where to get great gelato on LI
Hidden LI farm supplies farmers markets all year-round
2:18
Cuomo lifting capacity restrictions May 19
Didn’t find what you were looking for?