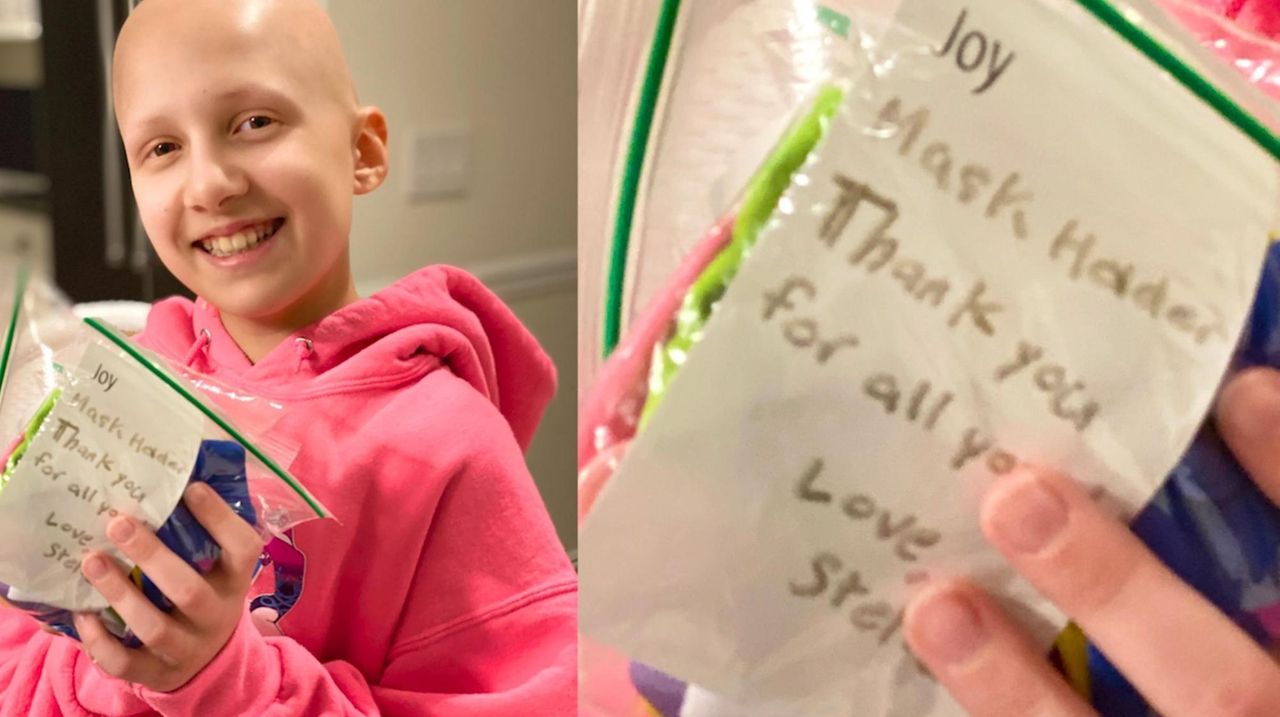 Stella DiPasquale, 11, has been making headbands for those on the front lines of the COVID-19 battle. She had heard that doctors and nurses who wear masks for 12 hours a day can get sore behind their ears and the headbands are meant to alleviate that pain. Credit: Newsday staff; Photo Credit: Joy Jaworski

Debby Sala Cosgrave has been going to Rite Aid, Stop & Shop and “from Target to Target" with a goal: to find headbands for her daughter and other doctors and nurses across Long Island.

Sala Cosgrave’s daughter, Dale Cosgrave, 23, is a nurse in the pediatric oncology department at Stony Brook University Hospital. She works 12-hour shifts, which usually end around 7 a.m. Dale then returns to their Brightwaters home and heads upstairs to get some sleep.

Sala Cosgrave has been finding little ways to help her daughter since the pandemic began — she sprays down her sneakers with Lysol and used to wash her scrubs (before it became required for doctors and nurses to leave their gear at the hospital for it to be cleaned by staff, she says.)

During those long shifts at the hospital, Dale, like doctors and nurses across the country, wears a mask the whole time. Recently, she told her mother that sometimes she develops pain from this, because the elastic from the mask is looped around her ears for long periods.

So Sala Cosgrave found another way she could help her daughter: she started buying headbands and sewing buttons on either side, so Dale could wrap the mask around the buttons instead of her ears.

“I saw it on the internet,” Sala Cosgrave said. “I said, ‘Why don’t I make some for the girls you work with?’ I’ve made hundreds of them since then.”

Sala Cosgrave always looks for Scünci brand headbands, and on either side she sews round buttons, three-quarters of an inch or bigger, so the elastic can loop around them and keep the mask attached. It takes her 10 minutes to sew one headband, and she completes about 50 headbands a day.

So far, Sala Cosgrave says she’s donated 150 headbands to Stony Brook, another 150 to Southside Hospital in Bay Shore, 75 to Good Samaritan Hospital in West Islip and 50 to Huntington Hospital.

Sala Cosgrave was recently laid off from her job with a moving company in Farmingdale. "This kept me busy for a couple of weeks," she said. But supplies are becoming harder to find because “a lot of people are doing them."

Luckily, she's gotten some help from her mother, JoAnn Sala, who is 80. “She had a bunch of buttons,” Sala Cosgrave said with a laugh.

This cause is important to Sala Cosgrave, not just because her daughter is battling COVID-19 on the front line. Sala Cosgrave is a breast cancer survivor — this August will mark her fifth year in remission.  She said she’d like to reach out to Memorial Sloan Kettering Cancer Center in Commack to see if they need help, because that’s where her chemotherapy and radiation treatments took place.

“The only good part about this is the human connection everybody feels with perfect strangers,” Sala Cosgrave said. “The love and compassion between everyone; that’s the beautiful thing.”

Across the Island in Glen Head, an 11-year-old has also been making headbands for this cause. Stella DiPasquale has sewn 60 headbands so far for doctors and nurses at North Shore University Hospital in Manhasset and Glen Cove Hospital, along with some nursing homes in Glen Cove. She just learned to sew a few weeks ago.

Stella’s mother, Joy Jaworski, is in a community Facebook group and keeps track of doctors or nurses looking for headbands. She messages them asking for their addresses and drops off a bunch that they can bring to work with them.

They order the headbands and buttons online, and once they arrive, Stella gets to work.

“When we get a delivery she likes to get them all done,” Jaworski said. “So we just got a delivery of 40 and I expect we’ll be delivering [to doctors and nurses] by the end of the week.”

Stella has alopecia areata, an autoimmune skin disease that causes hair loss. She was diagnosed two years ago. Her message to the doctors and nurses that have helped her, now in the midst of a pandemic: “Thank you for all that [you’re] doing.”

When Stella isn’t sewing headbands or doing homework (she goes to The Green Vale School in Old Brookville, now holding all their classes online) she loves to dance. Her daily ballet classes have also gone virtual. Last year, she played Marie in Fadeyev Ballet’s production of “The Nutcracker” in Greenvale.

“It was really fun to have that experience,” Stella said.

“A lot of work?” Jaworski asked her daughter.