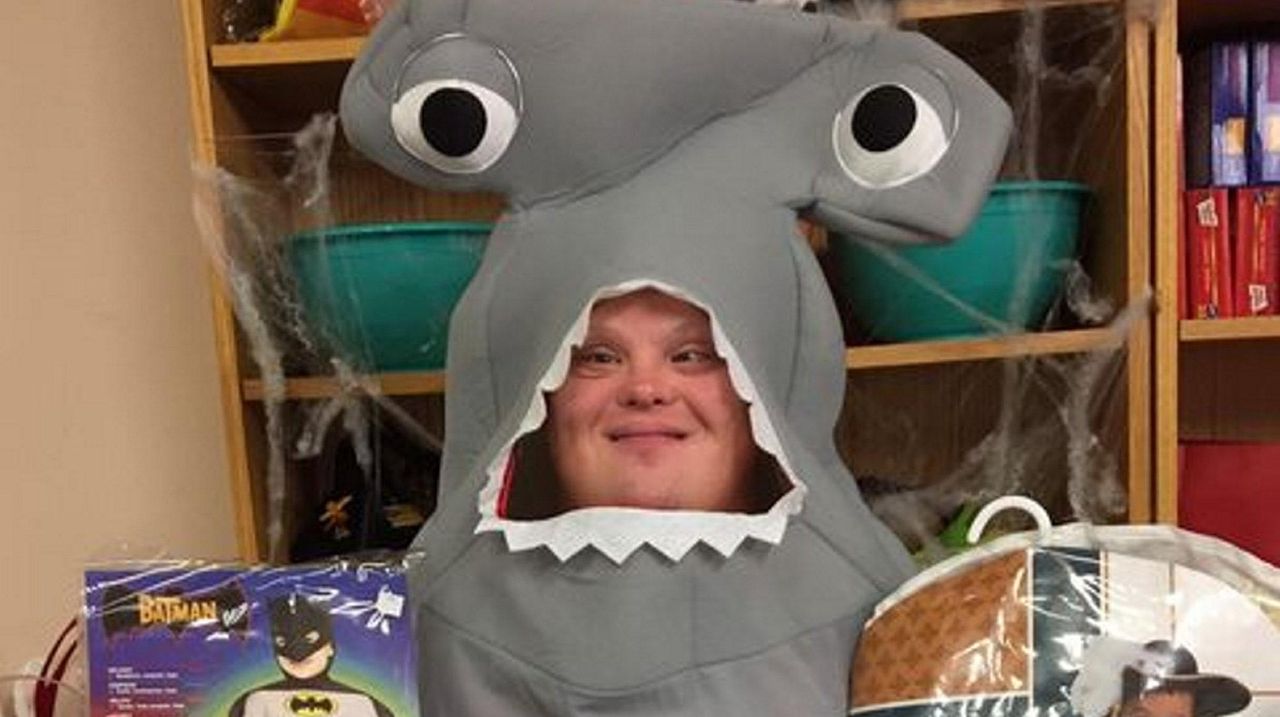 Keith Caputo founded the nonprofit Helping Makes U Happy in 2015 with his mother, Cassy Caputo. The organization fundraises and collects donations of school supplies, food and more, year-round. They recently held a Halloween costume drive in Center Moriches, and still have about 150 costumes left for Long Islanders in need. Credit: Newsday staff; Photo credit: Cassy Caputo

"How does it make your heart feel when you help people?" Cassy Caputo asked her son, Keith Caputo.

As a founder of a nonprofit organization called Helping Makes U Happy, it’s safe to say Keith feels these emotions often.

The mother and son created the organization in 2015. Year-round, they mobilize volunteers across Long Island — from 5-year-olds to retirees, Cassy said — to fundraise for scholarships and collect donations of food, clothing, school supplies and more.

Keith, 39, has become a strong presence in the community, especially since the organization moved into an office space in Center Moriches. Everywhere he goes, he promotes Helping Makes U Happy — once he even handed out brochures on a cruise he and Cassy took from Florida, which led to fellow vacationers getting in touch and donating afterward. "It was supposed to be a non-working vacation," Cassy said with a laugh.

"--because they know he’s the real deal," Cassy continued. "He doesn’t have an ulterior motive; he just really wants to help people."

When the coronavirus pandemic began, the team had to put their efforts on hold. Keith, who has Down syndrome, has a compromised immune system, and Cassy knew they had to be careful. They stayed home for a few months, and then resumed operations in smaller group settings.

"We had so many people who must have felt the same as us: let’s get out there and do something to help people," she said. "A lot of the things we do are designed to not only help others but to make the helpers feel good; to make the community feel good."

The group of volunteers tie-dyed and donated hundreds of masks, and took 250 of them to a local hardware store for the employees to give to their customers, Cassy said.

More recently, Helping Makes U Happy held its annual Halloween costume drive. Instead of hosting it in the group's office as usual, they gave away costumes outside the Center Moriches Fire Department. They collected 200 costumes, donated by community members, to give away this year. Cassy said that number is usually a lot higher, citing the pandemic. But families still came out to drop off costumes and show their support.

"It’s always such a fun thing," she said. "The costumes are beautiful and the kids love coming to look at them."

Diana Pomponio, of Shirley, first met Cassy and Keith through their Halloween drive two years ago, and stopped by this year to catch up with them and donate.

But when her 2-year-old daughter, Rosalie Podejko, spotted a Nemo costume, all bets were off.

"She grabbed that because right now she’s on a Nemo kick, and I was like, ‘Oh no, we have to put it back,’" Pomponio said. "I had already gotten her a costume, but she wouldn’t let it go and [Cassy] said, ‘No it’s fine, take it.’ "

Pomponio said this is just the kind of people the Caputos are. She said Cassy has expanded her network so much that people in the community go to her for help for all kinds of reasons.

"What they’re doing, there should be more of that going around," she said. "More volunteering; more caring in the world we’re living in today. We really need that more than ever."

Cassy said due to the weather on the day of the Halloween costume drive and the change of location, they still have about 150 costumes left to give away. She said anyone can call the Helping Makes U Happy office and make an appointment to pick one up.

Now, Cassy and Keith are putting together 250 "comfort cases" for the Suffolk County Child Protective Services bureau. These are new backpacks they buy and fill with toiletries, blankets, toys, journals and pens. Then, Helping Makes U Happy will collect shoes, coats, hats and other winter outwear to donate to homeless shelters.

Keith said the organization often has multiple projects going on at once, plus they’ll help those in need who reach out to them.

"Sometimes a friend will refer a friend that feels embarrassed to ask for help, but nobody should feel embarrassed, right?" Cassy said.

2:21
A festival takes over Greenport: Here's what's up on LI this weekend
Fire pits, pizza gardens and more: The ultimate guide to fall dining on LI
6 reasons to escape to Fire Island this fall
2:21
10 events, things to do this weekend on Long Island
What to eat (or not) at LI's first Top Golf
Fall fairs and festivals to keep on your radar
Didn’t find what you were looking for?