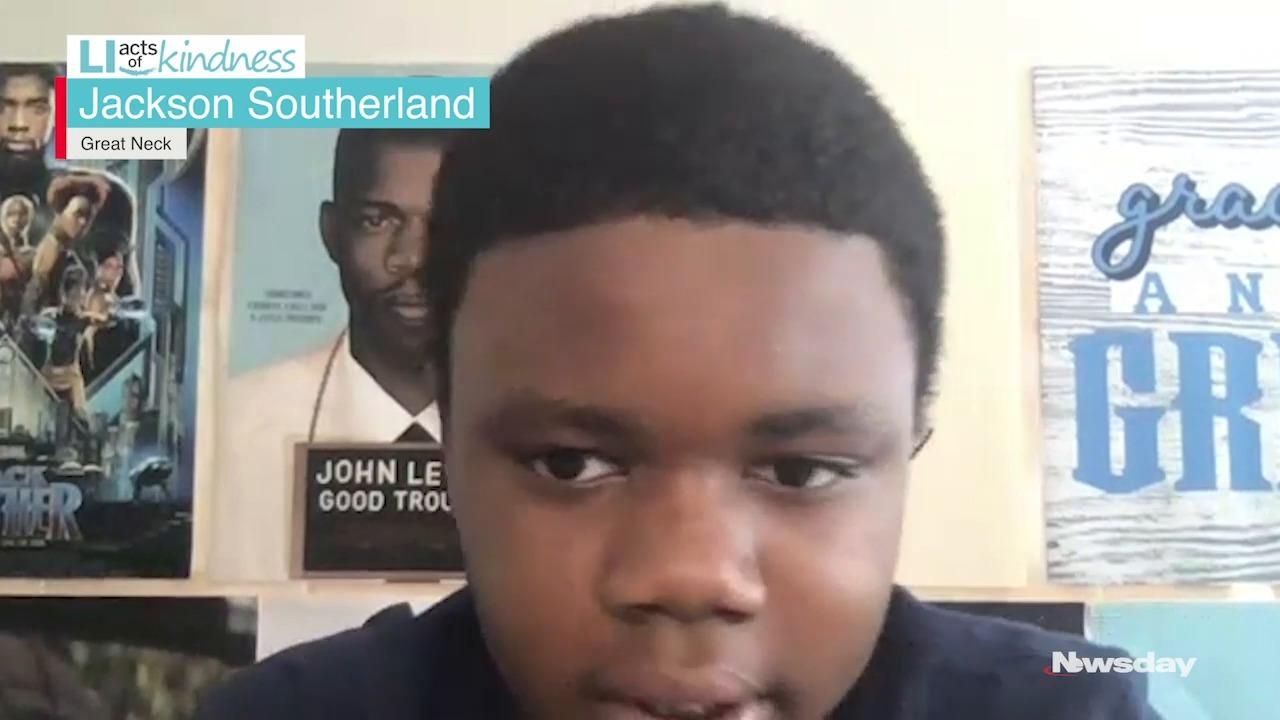 Jackson Southerland, 13, who says he's been finding ways to help the homeless population for years, recently collected 500 pairs of socks to donate to the Long Island Coalition for the Homeless. The organization will give him their Unsung Hero Award this fall. Credit: Newsday staff; Photo credit: Lissa Southerland

Lissa Southerland said that since her son, Jackson, was 5 years old, he’s wanted to help the homeless population. When the Great Neck family took trips into Manhattan, Jackson Southerland would insist on stopping whenever they passed a homeless person.

"He would be like, ‘Mom, give them some money, please,’ " Lissa Southerland said. "The passion for this population has innately been in him."

Jackson Southerland is 13 now, and has found hands-on ways to give back. In November, he will become the youngest-ever recipient of the Unsung Hero Award, presented by the Long Island Coalition for the Homeless.

Around Christmastime last year, Southerland and his mother did some research on what the homeless population needs most.

"Socks are one of the biggest things that most homeless people don’t have," he said.

Lissa Southerland said that her son, who attends Richard S. Sherman Great Neck North Middle School, first proposed a sock drive to his student government association as a school event. He later expanded it into the Great Neck community.

"I had families dropping socks off at our house," his mother said.

Jackson Southerland ended up reaching his goal of collecting 500 pairs of socks. He donated them to the Long Island Coalition for the Homeless. The organization coordinates with local governments and agencies to develop housing for Long Island’s homeless population.

Executive director Greta Guarton was impressed by Southerland’s thoughtfulness with these particular donations, noting that socks are one of the most commonly requested items by people living in shelters.

"It’s one of those things people don’t tend to donate," she said. "And they wear out, and you need to wear them every single day."

Last year, Southerland also rounded up donations from his personal collection for The Street Store, a free pop-up clothing shop for the homeless in Brooklyn. He donated 15 pairs of basketball sneakers that he’d outgrown — Southerland plays for the Riverside Hawks basketball team in Manhattan.

"They were good shoes, in good condition," the teen said. "So I just wanted to give them out to someone else."

Southerland has spoken about these efforts at conferences and school events on Long Island. "It’s important to me because I want to be a role model to people that look up to me, and I know giving back to homeless people is a good thing to do. I know I could be in their position any day."

For these reasons and more, Southerland was named this year’s Unsung Hero by the Coalition. In the organization’s 11 years of giving this award, Guarton noted that the teen is the youngest recipient by about a decade.

"It’s absolutely wonderful that there is someone at such a young age already thinking about this," she said.

Guarton added that it’s especially remarkable, considering that Southerland may seldom come across homelessness where he lives.

"Great Neck is not one of those areas where you encounter very many homeless people," she said. "So for homelessness to be something he has an awareness of and he considers that there are people who are suffering … It really speaks to what a wonderful and special young man he is."

Jackson Southerland will receive his award at a virtual ceremony in November. After that, he’ll be organizing another Christmas sock drive in his community, with a goal in mind.

"I hope to triple the amount of socks," he said.

This recipe for black bean soup is ready in a hurry
10 events, things to do this weekend on Long Island
5 things you need to know about Winter Restaurant Week
Over-the-top tasting menus gain popularity on LI
These tropical restaurants will help fight the winter blues
Long Island restaurants offering a true taste of Japan
Didn’t find what you were looking for?