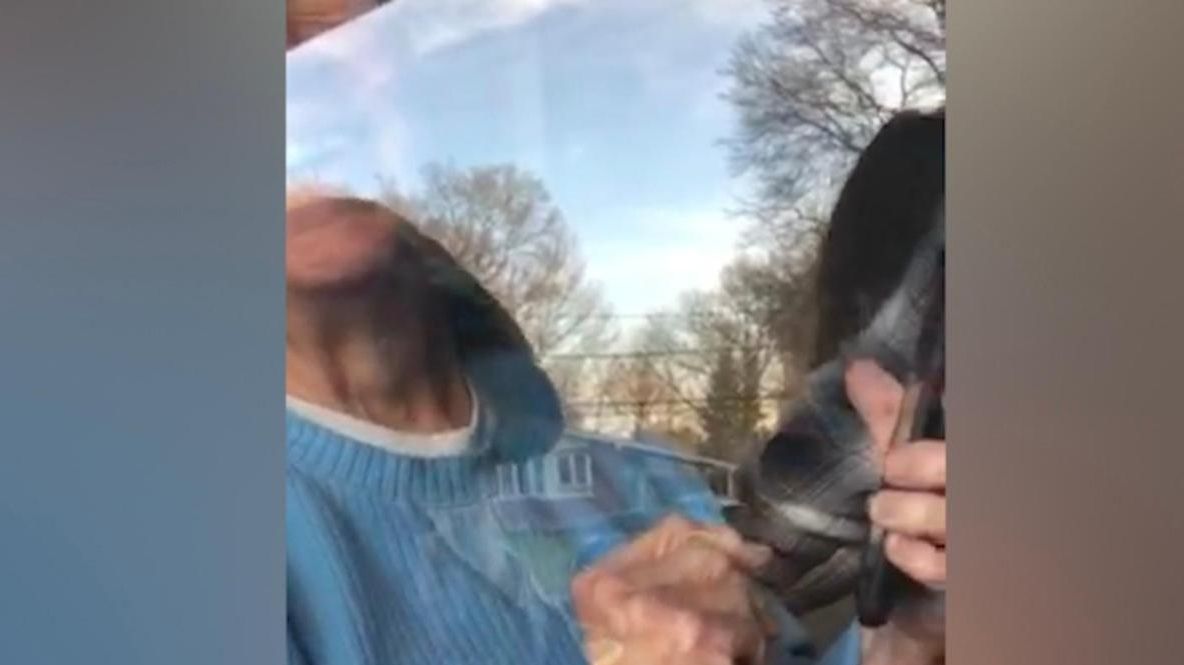 Patricia Horne, 81, is now using her granddaughter's iPhone so she may stay in touch with her 17 grandchildren. Credit: Jennifer Rahner

Anna Rahner said the decision to give her iPhone to her grandparents two weeks ago was a no-brainer.

“They needed a phone more than I did,” said the 14-year-old.

Donald and Patricia Horne, of West Islip, have 17 grandchildren and three great-grandchildren. The family lives all over the world — one of their grandchildren lives in Japan.

Anna, who lives in Islip, feels it’s more important now than ever before for her grandparents to keep in touch with family. That’s why she gave up her phone and taught her grandmother to use FaceTime.

“Even just them getting them onto the phone itself, that was just funny,” Anna said. “They're not really used to it, so just touching home screen, they would hold it for too long. But she’s gotten used to it.”

Jennifer Rahner, Anna’s mother, enjoyed watching her parents learn to use new technology. Rahner said that at first her mother would accidentally activate Siri every time she touched the home button, and would call her using FaceTime her with only half of her face showing on screen.

“We were teasing that she’ll probably have her own TikTok account by the time this is all done with,” Rahner said.

Anna added that she hadn’t told all of her friends that she no longer had a phone. So a couple weeks back when they called Anna on FaceTime and grandmother picked up, “they were kind of all shocked,” she said with a laugh.

“I’m usually a very busy person,” said Anna, who plays softball, volleyball and basketball at Islip High School. “The only time I really spend on my phone is when I’m in the car, going place to place. I contact my friends on there, but now they contact my mom.”

Rahner said when all of this is over, Anna can get her phone back from her grandparents, but for now her daughter doesn’t seem to mind the adjustment. Anna has been painting a lot in her free time, and she and her mother are planning to revamp her bedroom.

“It was very selfless of her,” Rahner said. “I’m very proud of her.”

In Setauket, one family’s dynamic has been ever-changing since self-isolation began. Olga Syritsyna is a neurology attending physician at Stony Brook University Hospital, and a mother of three. Right now she is working remotely and splits her time between her office and her home. All day, she answers calls from patients and assists them via telemedicine software.

Syritsyna’s husband, who teaches at Stony Brook University, is also working from home. They would prefer their children stay with them instead of going to daycare, and their 12-year-old daughter, Sophia, has risen to the occasion. Sophia helps take care of her 3-year-old brother, Paul, and 1-year-old sister, Marina, for two or three hours a day, Syritsyna says.

“It’s very nice of her,” Syritsyna said. “They’ve bonded with her very much.”

Sophia invented a game to play with her brother she calls “Animal ABC,” where she helps Paul learn the alphabet using plastic animal toys.

“I find him an animal that starts with that letter and it teaches him how to spell the animal’s name,” Sophia said.

Syritsyna said Sophia also feeds them and helps put the youngest, Marina, down for naps.

“And I just make sure that they don't injure themselves,” Sophia added.

Syritsyna said there’s a possibility neurologists in her department may be deployed to medical services soon to begin working with patients diagnosed with COVID-19, but nothing has been confirmed yet. In the meantime, she’s proud of the way her oldest daughter has stepped up.