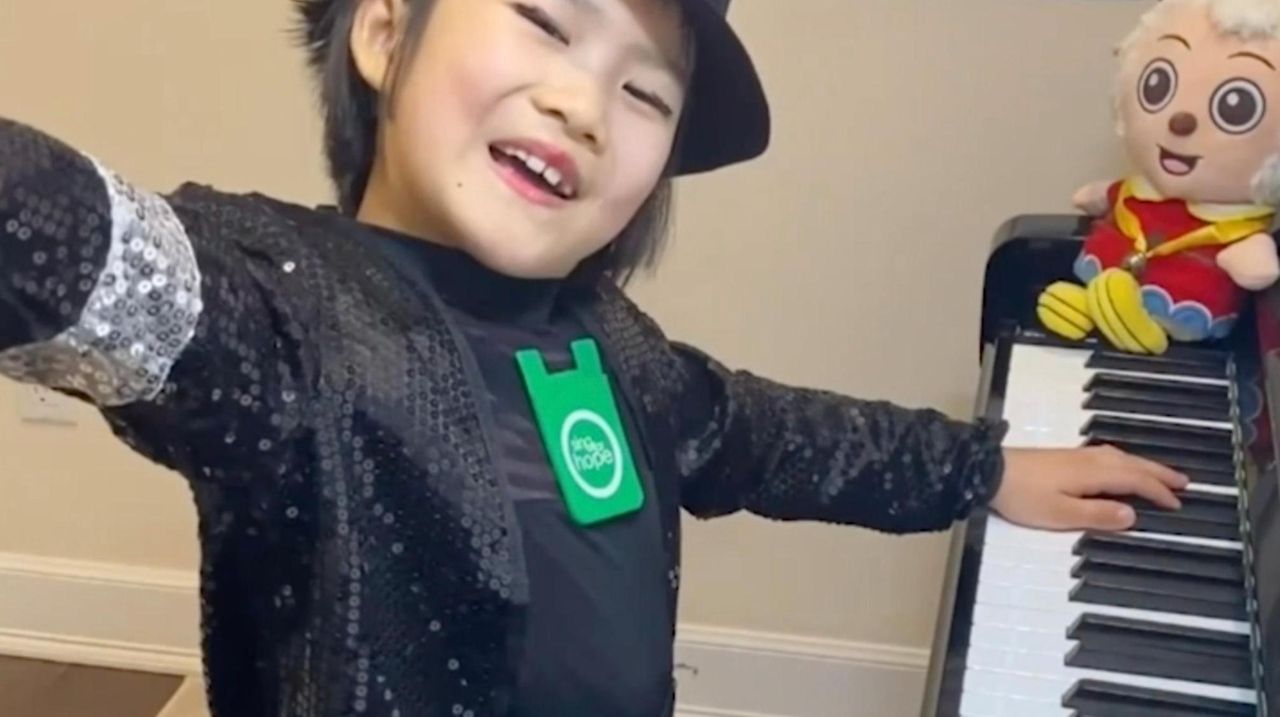 Xiaoyan Liu has played piano at Carnegie Hall and on “America’s Got Talent.” She’s won competitions, with two international first-place titles under her belt. Her repertoire is stacked with compositions by Bach and Beethoven and tunes made famous by Michael Jackson and Walt Disney.

Liu’s mother, Xinxin Li, said her daughter is “always the shortest one” on these big, grand stages.

Why? Because she’s 7 years old.

Xiaoyan Liu, also known by her stage name LeLe, has been playing piano since age 3. Last year, she placed first in both the Crescendo International Music Competition and the American Protégé International Piano and Strings Competition.

Even though she’s seen the lights of Carnegie and Steinway Hall, Liu said her favorite stage is the Great Neck Social Center, where she’s performed for senior citizens since she was 5.

When the pandemic began, Liu wanted to continue helping people through her music. She and her mother have made videos of herself playing piano in their Great Neck home for the nonprofit Sing for Hope.

The Manhattan-based organization was founded by Camille Zamora and Monica Yunus, who met as opera students at The Juilliard School. That’s where they were during the 9/11 terrorist attacks. The school shares a block with a firehouse that lost 13 first responders that day, Zamora said.

“As music students, we were left wondering what to do,” she said. “There is a place for the arts in times of crisis.”

It was then that Zamora and Yunus decided to start singing in hospitals, schools and of course, that firehouse nearby. They founded Sing for Hope in 2006 with the same mission in mind: to uplift people in need with live musical performances.

In the age of COVID-19, these performances have gone virtual. Sing for Hope collaborates with artists from Broadway and beyond, and then the organization provides videos to their health care partners.

“Donations allow us to pay the artists and bring hope through the arts to front-line health care workers, hospital patients and isolated seniors and veterans,” said Zamora.

Liu has filmed five videos for Sing for Hope, which will soon be posted on their social media pages and shared with folks in need of a little music. In the videos, she’s played Michael Jackson songs (her favorite is “Smooth Criminal”), “I See The Light” from the Disney film “Tangled,” and “A Whole New World” from “Aladdin.”

"She's been really notable in how much of a vision she has as such a young person," Zamora said. "She has an initiative to make a better world through the arts."

When she plays piano, Liu’s little hands move quickly across the keys as she bobs to the beat, with a grin from ear-to-ear. Sometimes she likes to sing along, too.

“Sing for Hope allows her to not only play piano; she just wants to spread love to people,” her mother said.

In her free time at home, Liu practices two hours a day. Otherwise, she can be found playing with her Goldendoodle or drawing. She’s excited for front-line workers and COVID-19 patients to see her videos.

“I really want the health care heroes to see it, so they can get stronger and they will fight the coronavirus together with me,” she said.

“When people clap their hands and stand up for her, she feels excited,” Xinxin said. “She loves that kind of feeling. So she’ll continue to play piano maybe her whole life, I think.”

Liu said, “My stage name is LeLe because I always smile on stage.”

5:11
Halloween events, things to do this weekend on Long Island
Retired friends open coffee and pastry shop in Amityville
Pumpkin-shaped bagels and more fun fall treats to try
LI drive-in, outdoor movie and concert schedule for fall
Festivals and carnivals happening on LI this fall
Halloween dinner made easy: Spaghetti with 'eyeballs'
Didn’t find what you were looking for?