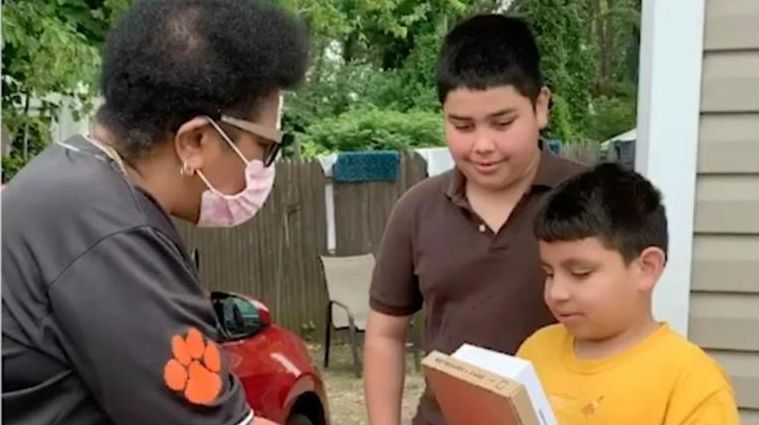 Back in 2006, Dafny Irizarry started knocking on doors. She said she wanted to talk to her community about how to address education disparities that bilingual students face on Long Island.

“I was told that bilingual students are not receiving equal services when it came to educational opportunities, and that troubled me tremendously,” said Irizarry, whose background in education and advocacy propelled her forward.

“One of the doors I knocked on suggested that one of the ways to voice these needs and advocate for this population is to form an organization of people that understands the needs of Latino students.”

Now, 14 years later, Irizarry is knocking on doors again — this time, as the founder and president of the Long Island Latino Teachers Association. And she’s not showing up empty-handed. Irizarry’s organization has donated more than 60 tablets and laptops to local students in need, to help them in the age of distance learning.

Irizarry said children in low-resource communities can experience a “digital gap” in their learning. It exists all the time, she said, and has become magnified during the pandemic. Students need devices like laptops to complete assignments and communicate with teachers and classmates.

“Many times they have expressed how difficult it is to complete work from a phone,” Irizarry said. “Some children have to borrow their parents’ phones, and also have to share it with their siblings.”

She and her organization, which is also known as LILTA, began reaching out to Long Island school districts to identify the needs.

“We realized Brentwood and Central Islip did not have any computers to give to students,” Irizarry said.

So, LILTA got to work. First, it partnered with UnitedHealthcare and gave 20 computers to students in Central Islip and Brentwood, with a focus on “English language learners,” Irizarry said. Next, it teamed up with the Labor Council for Latin American Advancement to provide 20 Google Chromebooks to children in Central Islip.

Irizarry said people have been “very generous” in helping LILTA with this effort.

“We’ve been partnering with different organizations and asking for donations,” Irizarry said. “We get access from teachers in those districts, call the parents to arrange the delivery, and bring the device to the students.”

For its third round of deliveries, LILTA teamed up with the Long Island Black Educators Association, or LIBEA. President Brandy Scott said her organization, founded 20 years ago, has a similar mission to LILTA's.

When the pandemic began, Scott reached out to her executive board to start figuring out ways they could help. The educators in her organization faced varying challenges.

Irizarry reached out to Scott to tell her about LILTA’s donation efforts so far, and Scott was excited to get involved. “If we combine our forces and our resources, we can help more children,” Scott said.

Together, the organizations delivered 20 tablets to families in Central Islip. Irizarry said they focused on special-education students. She added that the responses have been emotional from parents and children alike.

“In my opinion, it is their right to have a tool to continue their education,” Irizarry said. “Having a tablet or a Chromebook can be life-changing.”

Scott added that the deliveries have resulted in lots of “jumping up and down, screeching and crying."

“They didn’t expect to receive anything,” she said.

“These are gifts from us directly to these students,” Scott said. “They can hold onto it; it’s theirs to keep and they can use it through the rest of their career.”

In addition, the organizations are accepting donations of old devices that can be refurbished for students.

During the pandemic, LILTA members have volunteered with Island Harvest on their food distribution services, worked as helpers at the Wyandanch COVID-19 testing site and created a resource guide for educators and parents on distance learning, Irizarry said.

Before the pandemic, LIBEA members had been planning to present to Long Island school boards on how to improve diversity in staff in their districts. They’ve also been reminding communities to fill out the U.S. census and hope to impact the Central Islip area with those efforts, in particular.

Both organization leaders said they will continue to help educators and students in need, through the pandemic and beyond. But Irizarry just hopes that everyone can get back into their classrooms soon.

“Nothing replaces the students’ experience of being in school with their teachers and their friends in that nurturing environment,” she said.