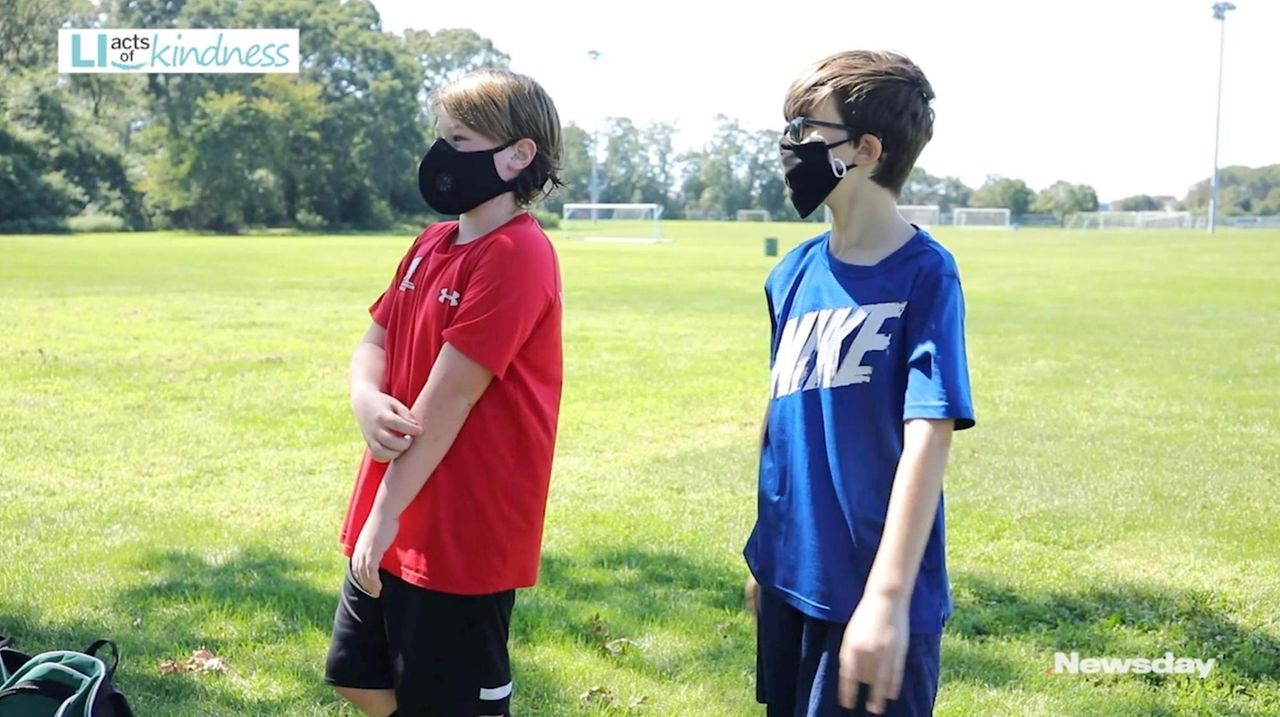 Sean Camberdella is an 11-year-old Lindenhurst boy with a love of soccer. But because Sean has Hemophilia B, he wasn't cleared to play organized sports until 2019. During the pandemic, Sean couldn't be around large groups of people. But his coach came up for a way for Sean to keep playing. Credit: Morgan Campbell

It was a soccer game that 11-year-old Sean Camberdella will never forget: His team, the Lindenhurst Revolution, against the Eclipse, an opposing team in the Lindenhurst Soccer League.

It was last spring — Sean’s third game ever. He joined the league a little late, but thankfully his coach gave him the #3 jersey and the chance to be part of a team for the first time.

During the game, Sean rushed down the field with the ball, making his way toward the opposing team’s goalpost. He propelled the ball forward. Sean's adrenaline was pumping, but he wasn’t nervous. He said it felt cool.

Then, Sean scored. He was instantly met by a massive celebration. They ended up winning the game.

"I felt so happy after it," Sean said. "It was really cool. We all hugged after, and they were all screaming my name and saying, ‘Let's go!’"

Sean, who has Hemophilia B, a bleeding disorder, was only able to play for a season and a half before the COVID-19 shutdown. But thanks to a pair of volunteer coaches and their son, Sean has been able to resume practicing the sport he said he's loved ''since [he] was born.''

The road to becoming a soccer team member was a long one for Sean. He grew up playing soccer in his Lindenhurst backyard with his mother, Bernadette Camberdella, and wanted to play every day, Sean said. But he was unable to join a team until last year.

Sean began treatment for his condition and taking medication at age 3, his mother said.

"He would be doing a normal activity and would burst a capillary," Camberdella said. "He’d get compartmental bleeds in his legs and arms just from horsing around as a little kid."

But Sean’s love of the game couldn’t be suppressed.

"He asked me every day of his life when he could play soccer; when he could be part of that," Camberdella said. But "to never be able to play in a game and have camaraderie with teammates was a great emotional loss for him."

After years of various treatments, she asked Sean's hematologist about her son playing on a team. The doctor said as long as they were careful, within a specific window between treatments, they could give it a try.

Then came the challenge of getting Sean onto a team midway through the season. Camberdella contacted Lindenhurst’s soccer club president, and then got in touch with George and Stacey Hayduscko. The husband and wife both coach youth teams in the league, and Camberdella said they welcomed her son with open arms, promptly providing him with his own jersey and backpack.

"The pride this kid has seeing his last name on the shirt with the number, those little things made such a big impact on him," Camberdella said. "They didn’t have to do that, and they did."

Within a week, Sean was on the field, Stacey Hayduscko said. Camberdella gets emotional remembering Sean’s second game, where he made an assist that led to a goal. After the game, she remembers him excitedly saying, "Mom, that’s my first assist I ever had in my life!"

Sean's joy was cut short when the pandemic hit.

After practices resumed with smaller groups of players and COVID-19 safety precautions, Stacey Hayduscko reached out to Camberdella, who said she was unsure if she was ready for Sean to return to practice in a group setting. He’ll also be opting for remote learning for school this fall.

But the Haydusckos came up with an idea that would get Sean back on the field. George told Stacey that he was thinking about taking their son, Erik, to a park on weekends, to get some more practice time in. Erik is on the team, too.

"He said, ‘Let’s see if Sean wants to play with him,’" Stacey Hayduscko said. "This way, he has somebody else to play with."

So wearing masks and keeping social distance in mind, Sean gets to play soccer every Sunday with his coach and a friend.

"We were very impressed with Sean," Hayduscko said. "When you have someone that excited, it makes it so much easier. He always showed up and tried really hard, which was great for someone who has no experience besides playing with his mom."

Hayduscko is hoping for a fun and safe soccer season. But no matter what happens, there will always be a place for Sean to play.

For Camberdella, the kindness of the Haydusckos has been a game-changer.

"To me, I think it’s an amazing, selfless act," she said. "These parents don’t have these things to think about for their own child. They don't have to consider Sean, but they have from the very beginning."