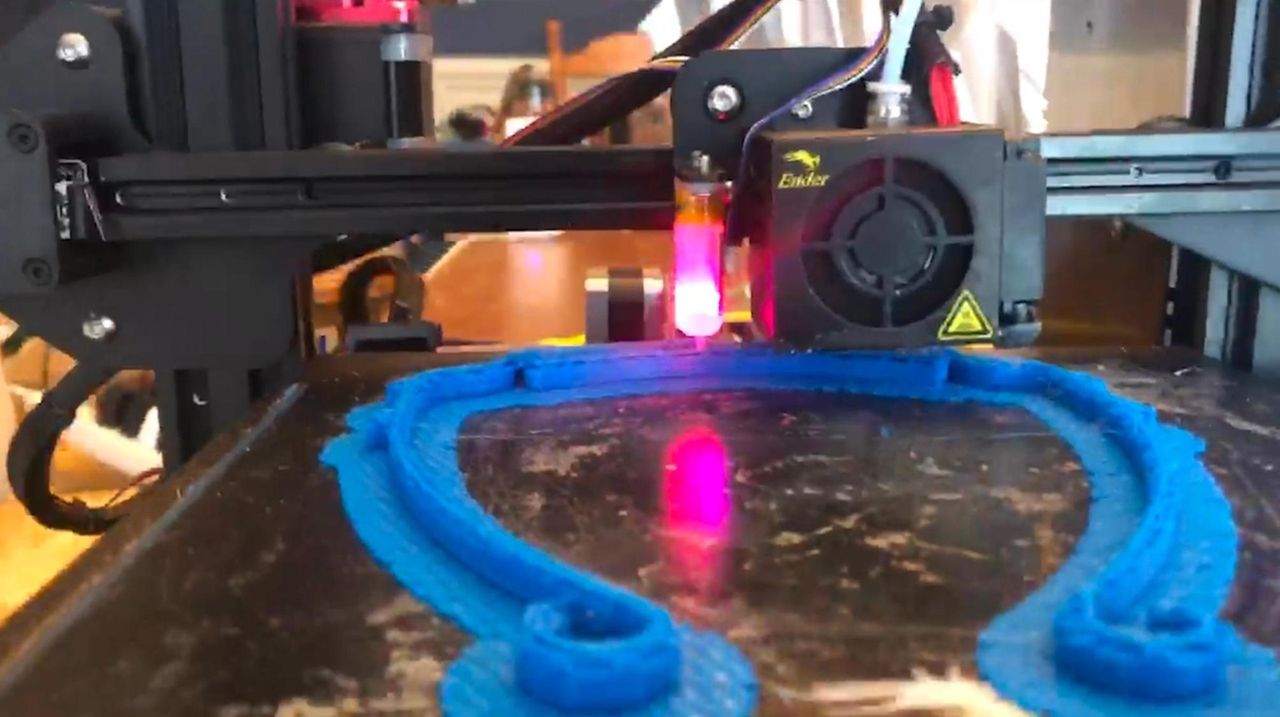 Ethan Silverstein, a 10th-grader at Syosset High School and a member of the school's robotics team, demonstrates how he's been making face shields with a 3D printer for those in need. Credit: Ethan Silverstein

A band of dedicated quilters. A longtime textile designer. A teen robotics whiz.

These Long Islanders are turning their careers and hobbies into ways to help fulfill one goal: to create face masks and shields that protect the most vulnerable, such as hospital employees and the elderly, from coronavirus. The barriers are meant to be worn over surgical masks, as an added layer of safety.

The organizations North Fork Quilters and Long Island Quilts for Kids are among several quilting groups that have become full-time mask-makers during the pandemic. Karen Nicholson is president of the Eastern Long Island Quilters Guild, a large network of crafters and quilt-makers making masks from Garden City to the North Fork, she said.

Members of the guild have mobilized within their communities to contribute masks throughout their areas. North Fork Quilters is a branch within the guild, and so far they’ve provided masks for Peconic Landing (a retirement community in Greenport), Peconic Bay Medical Center in Riverhead and Stony Brook Eastern Long Island Hospital.

“I’ve lost track but with the guild, we’ve probably made well over 2,000 and donated to different areas,” Nicholson said.

Nicholson, of Cutchogue, made her first quilt when she was 16.  She’s found a sense of community with her fellow quilters, who’ve made quilts for chemotherapy patients and children’s hospitals.

The masks are made with a piece of cotton and a piece of flannel sewn together, then something to secure the mask around the head — elastic, strips cut out of T-shirts, hair ties or other stretchable fabric.

“We’re not medical professionals but we will help where we can, and that’s what our guild is all about,” Nicholson said.

North Fork Quilters donates masks either through nonprofits, such as Kait’s Angels, which makes the deliveries, or finds people in need through their own network, such as family members of quilters who are health care workers.

“A lot of nurses are using our masks when they leave facilities. We understand it’s not guaranteed to protect against the virus, but it’s preventing other germs being spread,” Nicholson said.

Long Island Quilts for Kids has also been hard at work — the volunteers have donated 8,000 kits to make masks and delivered 6,132 completed masks to health care workers around Long Island, according to Carrie Davis, the chapter president.

Mary Ellen Orchard, of Wantagh, collects donations of handmade masks at Eisenhower Park in Westbury twice a week, and also makes her own. “I already had all the fabric,” she said, “because I’m a quilter.”

Through several Long Island quilting Facebook groups, Orchard spread the word about her mission far and wide. With the help of volunteers, Orchard said she has donated just over 5,000 masks as of Monday to NYU Winthrop Hospital in Mineola, Nassau University Medical Center in East Meadow and St. Francis Hospital in Roslyn and other hospitals. Orchard also sent a special 95-mask shipment for the aging nuns of The Sisters of St. Dominic in Amityville.

“I almost cried because they were so desperate,” she said.

Like Nicholson, Orchard also sews together flannel and cotton — 6- by-9-inch pieces, with a one-eighth inch of elastic. They agree that elastic is becoming hard to find due to this Islandwide mission, but Orchard tries to provide some to volunteers when she can find it.

“Everybody can do something,” Orchard said. “If you can’t sew, cut. If you can’t cut, look for elastic.”

Cynthia Julia Lagudi, of Oceanside, worked as a textile designer for 12 years before the pandemic. She had taken a break after having children and focused on her company, Cupcake Provocateur, but decided to get back into her trade earlier this year. In fact, she had just placed an order of fabrics and trims right before the need for masks arose.

Julia Lagudi wasn’t expecting to use her craft for this cause, but, “I thought it was the perfect opportunity to give back in some small way," she said. “It was a no-brainer."

And Ethan Silverstein, a 10th-grader at Syosset High School, is using his 3D printer to create face shields for frontline workers. He had been saving up for “a couple years” for the printer, which at first he was using for a class. Silverstein didn’t think he’d be home from school for more than a few weeks, but when he realized the severity of the situation, he got to work.

“After I did some research online, I found some models and some ways to do it, and I was able to start printing,” said Silverstein, 15.

Silverstein creates face shields, 285 so far, by cutting plastic into rounded square shapes and using the 3D printer to make the headband to attach on top of it. The way the printer works: “It’s similar to a traditional printer, but instead of ink, it’s plastic,” he said.

An added purpose of the shields, in addition to preventing the spread of germs, is to keep people from touching their faces, Silverstein said. Syosset School District administrators gave him more plastic to help create shields, which he has donated to various offices through the Allied Health System, plus several local hospitals. This endeavor is also a part of an outreach project for his school’s robotics team, Syborgs 10696.

“I have a tool here to help solve this issue, or make a dent in it as a local impact,” said Silverstein.