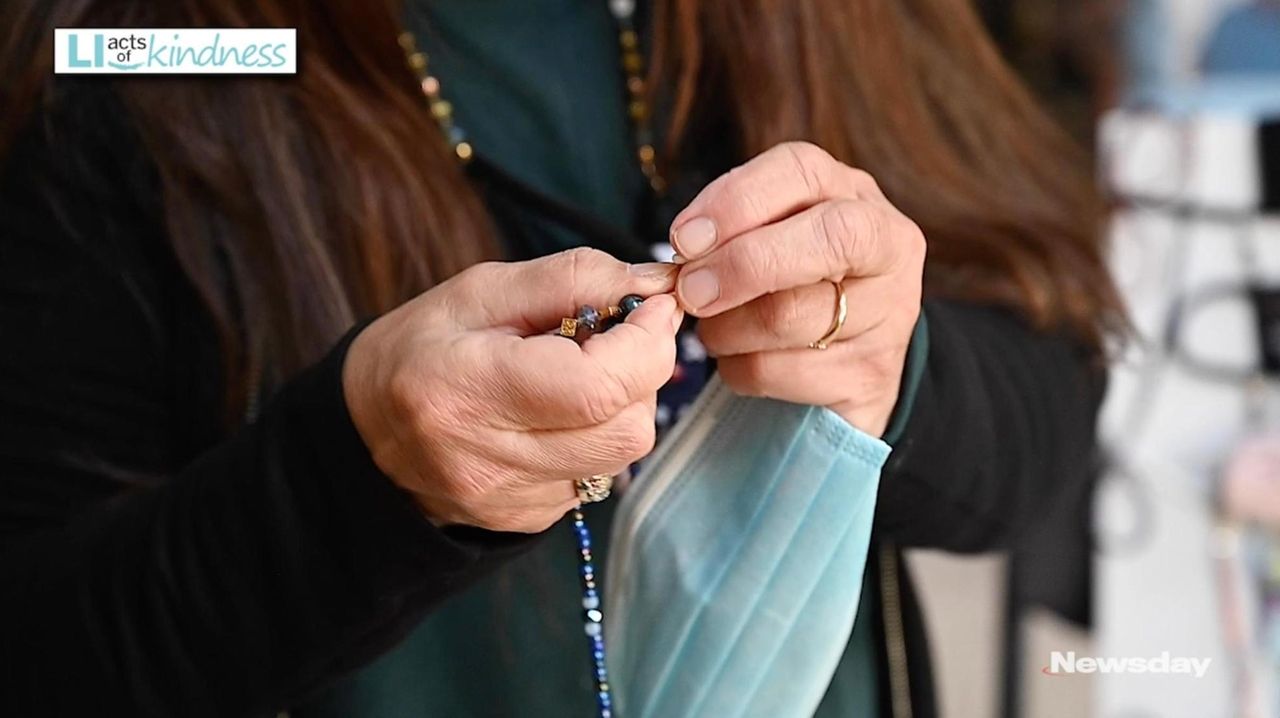 Linda Goldstein of Bellmore is a longtime volunteer of the Mary Brennan INN soup kitchen. During the coronavirus pandemic, she shifted her efforts to making mask chains and selling them to raise money, and then she purchases and delivers food to the INN. Credit: Newsday / J. Conrad Williams, Jr.

Linda Goldstein has a history of stepping up to help others during unprecedented and challenging times.

It started after Sept. 11, 2001. Goldstein was working as a special-education teacher in Brooklyn when tragedy struck across the city. She quickly started volunteering with Ground Zero Food Services, a group of people who prepared hot meals for first responders in the aftermath of 9/11.

"I was flipping burgers and serving first responders food, down by the World Trade Center," said Goldstein, of North Bellmore. "I started a week and a half after [9/11] and I went on the weekends because I was teaching."

During the coronavirus pandemic, she stepped up once again, this time helping the Mary Brennan INN soup kitchen in Hempstead by fundraising. She's been making beaded chains, for the purpose of attaching masks and wearing them around the neck. Goldstein has also been packing lunches at the soup kitchen every week.

But like many people across the country, Goldstein had to adjust her plans in order to stay safe.

Goldstein has been volunteering regularly at the INN for 10 years. The INN, or Interfaith Nutrition Network, is a not-for-profit that offers essentials to Long Island’s homeless population.

Every Monday, Goldstein would make coffee, tea and hot chocolate for guests. She also volunteered on holidays, serving meals to those in need. The staff has lovingly dubbed her "Linda Latte."

She knew she was at high risk when the pandemic began — years after volunteering at Ground Zero, Goldstein discovered she had a lung issue.

"Fortunately it’s under control," she said. "I watch it and I go to a doctor for it, and everything’s OK. But I’ve been very careful because of it."

For the first few months of the outbreak of the coronavirus, a respiratory illness that would have greatly impacted her, Goldstein decided to take a step back from volunteering. Although it was not allowing guests inside, the INN soup kitchen proceeded by giving out bagged lunches, groceries and personal protective equipment at the front door, said its director of marketing and communications, Dana Lopez.

"I felt guilty I couldn't help at the INN," Goldstein said.

About last August, after months of quarantine, Goldstein got an idea. She'd made beaded chains for several of her friends, so they could attach their masks and wear them wherever they went.

"Then I thought, maybe I should do this as a fundraiser," she said.

Goldstein is now raising money for the INN soup kitchen by making and selling her mask chains. She purchases colorful beads and lobster clasps from craft supply stores to make them. Goldstein can even personalize the chains with names and words using beads with letters on them.

After the cost of materials, all the money goes toward buying items for bagged lunches given to INN visitors, Goldstein said.

She’s raised $2,500 to date, and goes out and buys the food herself — granola, fruit cups, chips, cookies and more. Each chain is $20, and anyone who would like one can email linniego28@gmail.com with their bead color preference and personalization.

Goldstein said there’s been a slowdown in purchases recently. "I would love to raise more money," she said. "I have a lot of beads left."

Lopez has known Goldstein for two years. She said she’s purchased several mask chains for herself and for loved ones.

"I think she’s made 200 mask chains," Lopez said. "I think it's unbelievable. It’s just the type of person an INN volunteer is. They have big hearts and just want to help people."

National Volunteer Week is April 18-24. Lopez said volunteers like Goldstein are "the heart of the organization," and during this week she wants them all to know how much they’re appreciated.

"Linda is a great example of the incredible volunteers we have," Lopez said.

Following safety protocols, Goldstein returned to volunteering in person at the INN last September. She packs lunches every Monday for those in need, and is still raising money by making mask chains.

It feels good to be back in person, but it’s clear that her commitment to the INN never wavered.

"In a sense, Linda never left," said Lopez, later adding, "We’re so grateful to her for doing what she’s done."

1:03
Cherry Blossom Festival opens in Greenport
Fishers Island Lemonade debuts vodka-spiked ice pops
1:03
A cherry blossom festival blooms in Greenport
6:10
An accident almost derailed her baking career. Now her cake shop is a runaway success
LI drive-in movie, concert schedule for the spring and summer
Mother's Day celebrations on LI, more things to do this weekend
Didn’t find what you were looking for?